He had the chance to send 11 snarling wolves out to face the stuttering Red Riding Hoods at Old Trafford and instead he sent out a bunch of puppies.

Buoyed by a win at White Hart Lane and crowing at how the Wolves win two on the spin just as people start writing them off, he looks down the fixture list and irrespective of form, selects the sort of XI county cricket sides put up against touring Australians. 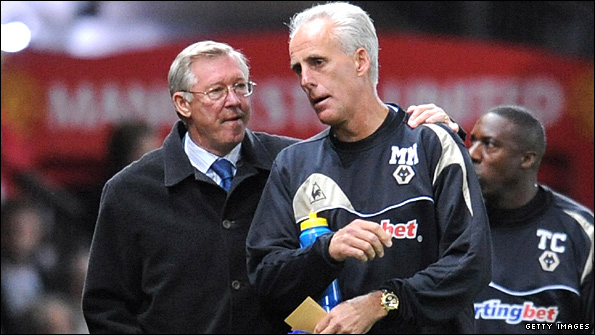 Mick McCarthy and Sir Alex Ferguson at Old Trafford
'Well done lads for them three points at WHL! Now on to the Theatre of Dreams - and dreams is all it's going to be for you lot, 'cos none of you are playing. Save yourselves for some real glamour when Burnley come to our gaff! Eh?

Well come on lads, who would you rather play against? Rooney or thingammy Fletcher? Giggsy or whatsisface on their left-hand side?! Aye! I thought so!'

Now I don't want to start some sort of McCarthy witch-hunt. Owen Coyle's not moaning about it and it could cost him more than most.

Wenger is, of course. Plus his Arsenal team have got to play three games in a week and Hull haven't! Wah-wah! Just once - ONCE! - could your team drop points and you not whinge like a toddler who doesn't want to share his toys?

Cripes. I hope he throws les tasses du the around at half-time more often 'cos it might spare us any more of this post-match wittering. Benitez has done his best to remain dignified in the face of some rubbish results from his team and if he can do it, so can you.

However I do think that if this is the way football is going to go, we might as well just give up now. I know there's been a bit of top-four dominance going on in recent years but if Mick had his way they'd change the league so you just had the top six play each other, the bottom six play each other and the middle eight draw lots to see which poor flaming saps get to troop around Europe's remote outposts in the name of the Eur'opeless League.

There was a fair amount of grumbling from the £40-a-ticket fans that had gone to see the reserves get brushed aside by a misfiring United. According to Mick, they were first team players. Maybe they are... just not at Wolves.

Now McCarthy has every right to pick a second-rate team if he wants to. I'm not sure any ruling could prevent him from doing so. There's them that argue Fergie did it at Hull on the last day of last season. Yep, that stank too - except that United won and never looked like losing. The Black Country boys never looked like winning.

All the rot about injuries, cramps and I expect there was the odd sniffle too - doesn't give McCarthy the right to reduce a great competition (the best for many years it would seem) to a farce. Frankly it's not good enough.

All right, we all kid ourselves that on any given day a bunch of misshapen misfits can take on a well-honed set of sporting thoroughbreds and turn them over - and let's face it Coyle's Burnley continue to prove that fact.

Indeed, this Premier League season has been a testament to that optimistic belief. Bolton and Everton getting 3-3's at the weekend... Spurs losing to some yeller-bellies from the Midlands...
'Course, you might argue that McCarthy was being realistic. But if your average footballer, let alone football fan, went into every match with simple pragmatism at the forefront of their minds we'd never bother to show up in the first place.

I bet there wasn't a Wolves fan in the country who didn't allow him or herself a moment of reckless optimism as they imagined Kevin Doyle bobbing up between a leaden-footed Vidic and Brown to nod an imperious winner. (And to be frank the way United have been playing they had their best chance in a decade to actually get something from the game!)

Then they saw the team-sheet. 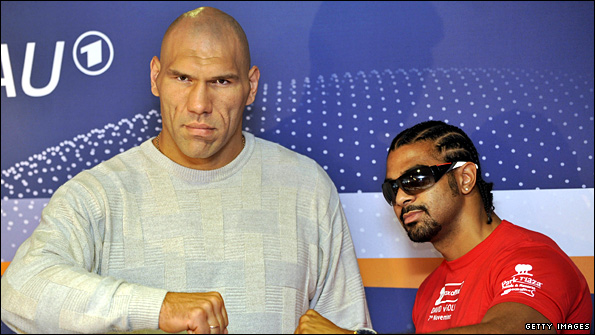 David Haye and Nikolay Valuev
Thank heavens David Haye didn't do the same, eh? 'Ooh you know what, he is a bit big! Can I take on that Dale Winton instead?'

What next? Becky Adlington gets off the blocks at the start of her 200m freestyle 'cos the girl in Lane five has swum right fast just recently? Bradley Wiggins takes one look at a Pyrenean hill, gets off his bike and waits for the next bus?

Ross Brawn realises that McLaren have a far superior car so he sends out Nico Rosberg in an Austin Allegro?GB's Davis Cup captain watches his team draw Spain and tells Andy Murray to put his feet up and watch Bogdanovic and some other no-mark get beat 2, 1 and 1. Again.

Sandy Lyle gets rain on his glasses so he stops playing at the ninth and hopes it's sunny for next year's Open Championship? Oh, wait a minute....

I know the Big Four rotate their squads all the time. The fact is they'll still win games by doing this. McCarthy, whether he likes it or not, chose to lose.

A realist? A pragmatist? A thoroughly sensible decision-maker? Or just a bloke who's undermined the very spirit of competitive sport? Somewhere in heaven, Billy Wright must be on the equivalent of a spin cycle.