That was horrid, Henry

It's come to this, boys and girls. Thierry Henry, a man who lit up our league with runs so mazy you'd expect to find them at Hampton Court, the King of the Va Va Voom, charming, eloquent, possibly a bit up himself but you can forgive that... a player whose cut-in-from-the-left-curl-it-in-to-the-far-corner finishes almost have his patent on it, has cheated his team into the World Cup finals.

I'm in a state of utter shock. I remember Henry getting flak for a 'dive' in the 2006 World Cup to win a free-kick from which France scored a winner against Spain and I gave him the benefit of the doubt. Well, not anymore.

It's not good enough to say 'I handled it, but I'm not the referee.' It's like an admission of guilt from a petty thief when he knows it's too late for the police to arrest him.

Why can't a player be man enough to hold his hands up and tell the officials what's happened? In fact, if Thierry had not put his hands up in the first place it would've been a goal-kick and none of this would've happened. 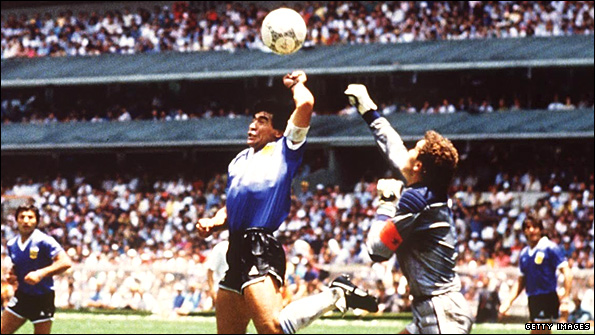 Maradona's 'Hand of God' sinks England in the 1986 World Cup
We've been here before of course with that Argentine swear-box Maradona. When the drug-fuelled screeches and the supersize sordidness have faded, the knowledge of his genius in '86 will still be surpassed by that divine intervention against Shilts.

The history books will tell you that Maradona almost won that tournament single-handed, and we all know which hand they're talking about. Somehow ,though, you sort of expect little Diego to push the boundaries of acceptability - everything he's done since would suggest that his moral compass never quite knows where magnetic north is.

Is it necessary for great French footballers to blot their copybooks with an act of outrageous rule-breaking?

The mighty Zizou will be remembered first and foremost not for exquisite pirouettes, or the fact that he dwelt in a different time zone from any other player on the park, but for the moment when he changed from midfield matador to charging bull.

Still, this is where we're at.

Ngog's attempt at the world record long jump at Anfield left a bitter taste. Not so long ago one Didier Drogba admitted that he simulated the odd plummet for his team's gain (he later refined it in a Buzz Lightyear sort of way by saying something to the effect of it wasn't diving it was 'falling with style').

And now Henry has the cheek to say 'I'll be honest, it was handball'. Honest? It's too flippin' late to be honest, son. The modern excuse is of course 'Yeah, I cheated but it's the ref's fault'. It's the footballers' equivalent of 'society's to blame'.

You're left with the distinctly ugly feeling that Fifa will be smiling all the way to Johannesburg. I mean who wants to watch Dunne and Duff when you can see Benzema and Ribery instead? Well, me, for one. Apart from anything they're a better team, with a far better coach than Domenech.

I'm with Trapattoni when he said: "I go to schools and talk to young children about the importance of fair play, and this happens." I give up, really. I mean I'll be out with me grandkid and a ball this Saturday and we'll be learning some of the basics of football:

1. Push it past the keeper and fall into him. It's more important to get a penalty than to try to score a goal.

2. Ref awareness. Always take note of where the officials are and remember if it's on their blind side you can get away with blue flaming murder.

4. Make sure your fingers are strong enough to grab hold of a slippery polyester shirt even when it's going past you at 25 mph. 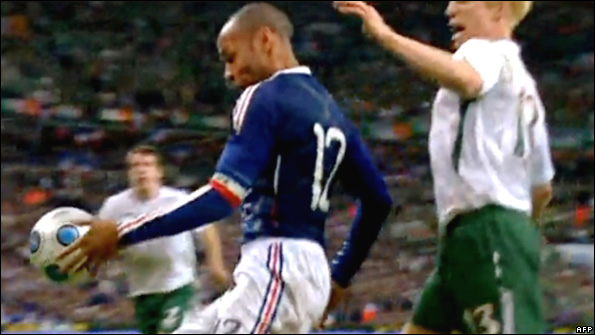 5. Upon scoring a goal, ignore your own family and go and irritate your opposition's mums and dads instead. Adebayor does this and he's on 170K a week. Just imagine how much you could earn if you're as good as him.

6. Always make sure your manager will back you up in public, regardless of how shoddy your behaviour on the football field is.

7. You might want to learn how to pass the ball to someone on your team. But as long as you've nailed rules 1-6, you shouldn't have much problem.

Richard Dunne's right. We can't carry on like this. There's more cameras at footie matches than you find in your local Dixons and everyone of them has a tale to tell.

I'm fed up of hearing referees getting clobbered for the misdemeanours of some of the cavorting conmen that pass for footballers these days. Let's face it, Zidane would've stayed on the pitch three years ago if the fourth official hadn't been called in.

We have to try using video replays now. It's a must. So what if it slows the game down? So what if conclusions are sometimes difficult to reach? Better that way than trusting the players are interested in playing the game properly. They're not.

I wasn't expecting to be blogging about one of the Premier League greats falling from grace this week. Rather, I was anticipating a drooling chapter on Katy Perry's West Ham lingerie collection. I mean the lad Brand must have her hooked if she's gone to them depths for him.

We missed a trick up here when Christian Karembeu's missus was around. Crikey. Still, I welcome this development whole-heartedly as a way of encouraging more lasses into football. And I'm very much-looking forward to Cheryl Cole's Barcode Bra and Pants Collection.