Champions League? You're having a laugh

It's back. Not the perennial freak show of X Factor auditions (this year get to lose your dignity in front of 2,000 people in an aircraft hangar as well as the millions watching at home! How soon before they have a tone deaf special?)

Not Strictly Come Dancing with its parade of 'where the hell is he from?' celebs, excluding Tuffers and Hingis. (I confess I'd like Tuffers to do well. If they let him have a fag on the go during the tango he could be off to a flyer).

No I mean The Flaming Champions Bloomin League. There it is resurfacing from the murk of summer like some swollen slobbering many-tentacled sea beast that survives by eating its own remorselessly regenerating tail.

I surprised myself on Tuesday and Wednesday. I only managed 45 minutes of United and 45 of Liverpool before I opted for the remote. I watched a recording of The Choir instead. I know! The wife loves it and it's full of the less well-off sticking a musical two fingers up at the posh lot down the road. Like Tranmere beating Liverpool or summat. What's not to like? 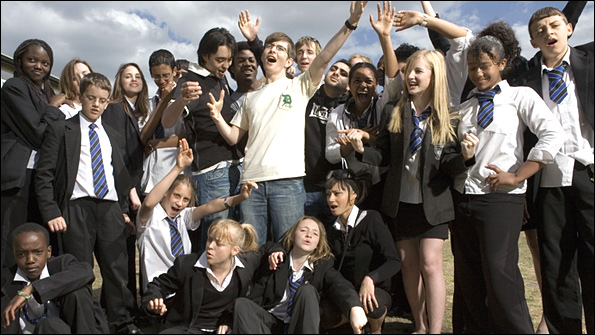 The Choir: They only sing when they're winning
Normally, I am as a kitten to a ball of wool when footie comes on the box. So why the indifference?

'Cos I'm a Boro fan? Nah. I'd never 've watched it would I? And don't get me wrong - I loved the Boro's little Euro-jaunt a few seasons back in the days when McClaren possessed neither simper nor brolly.

I think it's because of the naked greed of the whole thing. Especially in these group stages. There's more chance of Teesside Polytechnic reaching the University Boat Race final than anyone other than the English Big Four, Barca and Real Madrid winning this year.

It's become like bloody Cluedo. Every time you open the box it's the same flipping suspects. Sometimes I long for a Baroness Fuchsia or a Wing Commander Taupe to be in that box for a change.

Of course this hasn't happened by accident. The group stages are far more about money-making than they are about entertainment, as those who watched the games in Istanbul, West London and Merseyside can testify. After 20 minutes at Anfield I knew it was going to end 1-0, and I knew Debrecen were plucky.

Ah the plucky seeds. They might ruffle a few feathers, but they won't qualify for the knockout stages. Not the dangerous sounding infection Unirea Urziceni. Not the fragrant-sounding shampoo Apoel Nicosia. Not the thing that fella on the Arabian Knights cartoon in the Banana Splits used to say when he did his magic: "Rubin Kazan!"

None of these teams are destined for anything other than the Europa League (a kind of Champions League for thin cats) or obscurity - that's if you can distinguish between the two, of course.

The other thing about the return of that appalling anthem - to which I recommend you sing the words 'We're making millions! *!?@!* millions!' - is it heralds a period in which managers of big clubs start to blubber on about how they've got seven games in 21 days and how unfair it is.

And how these naughty international managers keep pinching our chaps and making them get injured so they can't get tired and fractious and downright crocked whilst playing for us.

Boo-bloody-hoo! Get over yourselves! The Champs League has been designed to create fixture congestion for the prosperous. If you're Fulham it's a stretch. But if you're in the fortunate position of having at least two top-four XIs in your squads then it's as comfy as a punt on a canal (don't say that wrong).

In fact, and I NEVER thought I'd say this, there is too much football on at the mo. And these bland little evenings in early September just add to the feeling.

Thanks to the Rooney spat - and my lad Darren reacts exactly the same way when I tell him to make space on the sofa by just sitting up on it for once - and the Arsenal defence through which you could comfortably build an eight-lane autobahn without encountering anyone, there were some minor points of interest. But nothing you couldn't have got from The Choir. 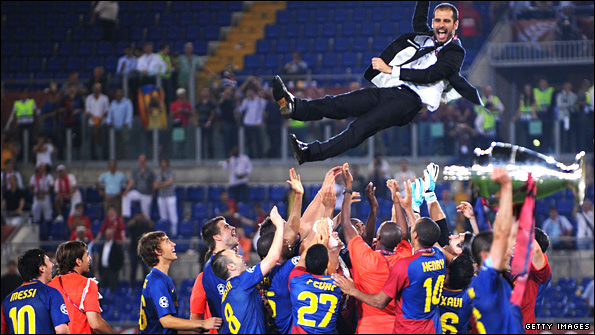 Come on, let someone else win for a change
And it's dull for one really big reason - it's not knockout from the start. 'Cos that might throw up an unfortunate one-off result. A league makes such accidents very unlikely. And we can ensure we have the quarter-finalists we want. Can't we?

Besides which, the competition is wrongly named. Our cricket club has an award for 'The Best Catch While Smoking'. Not surprisingly the gold-coloured plastic fag on a pine plinth goes to someone who caught a man out whilst retaining a cigarette within his grasp. (Won it three years out of four, me).

Now, how come you could win the Champions League when you're Arsenal? You've won nowt for four seasons! It should be called The Champions And Other Teams That Have Done Really Quite Well In Their Domestic Leagues Over The Past 12 Months League.
I'd love to see the English clubs flounder this year. Not least 'cos it'll mean we might have some fresh daisies amongst the spent and hollow wallflowers that usually show up on England duty in the summer.

In the meantime that F1 scandal's a shocker, isn't it? Flavio Briatore, the man who put the chicane into chicanery. Ruddy dangerous, mind. Makes Bloodgate look positively charming.

Piquet's crash put everyone working there in danger. The only problem with the whole sorry farrago is that it's starts to make F1 look interesting. And that can't be right.