Having watched the final round of the Open, I got up early Monday morning and clambered into the loft - actually I sent the lad Darren up there 'cos the hole into the attic must've got a lot smaller since I left me golf clubs up there.

I was out on the course by 8am. And I tell you I was playing it like Tom Watson. Tom Watson in the four-hole play-off that is.

There were lots of potential sentimental faves out there. Lee Westwood - a top golfer but somehow his walk never convinces me. He's got the Agassi waddle, hasn't he? But he got very close.

Then of course there was dad-to-be Ross Fisher who said he would pop up to see the missus if she went into labour. These golfers are flaming loaded, surely they could've brought the midwife up to Turnberry for the week. I had visions of the wife swearing her head off at poor old Ross as he asks her not to grip his hand so tight as it'll only affect his putting. 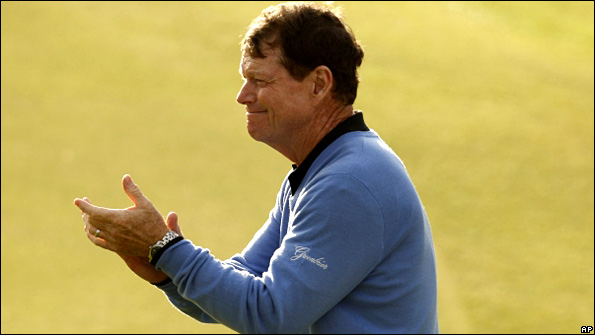 Then of course there was the spry 59-year old. Tom's hardly got a grey hair on his head, he's still got this jaunty little strut and were it not for a neck with more creases in it than a tortoise's you'd never know he was approaching the bus pass stage.

But at the end he looked like a tortoise of 279, didn't he? That putt on the 72nd hole wasn't so much tired as decrepit, and you knew he was done for.

I don't think there's ever been a less celebrated winner of the Open Championship than Stewart Cink. He seems a nice enough fella. He's certainly gracious and not at all vain or he wouldn't be going for the two-tone look on his bonce, with the tanned face and the lily-white head. Every time he doffed his hat he looked like a huge walking ice-cream cone.

But the thing was, no one apart from his family and my mate Tony Thompson (who had money on him) wanted him to win. Cink wins and there's not much of a story. Tom wins and it's the story of the century.

Cink's another of these American golfers who puts a lot of his success down to God. Sports people thanking the Lord for making it possible always make me feel uncomfortable.

Apart from anything else, why wasn't God rooting for old man Watson when he let that last approach shot drift over the back of the green? Mind, in the play-off He certainly moved Tom's balls in mysterious ways, his wonders to perform.

I only played nine holes of my round. It was hard to concentrate on your pitching wedge with TMS blaring out of your transistor radio. At one point I tried to let some other fellas through but they just stood with me on the 10th tee listening along. By the time Freddie bowled Siddle there were eight of us, ears cocked in the direction of Jim Maxwell, as the mighty man claimed his five-for.

When Johnson started clubbing it around and Clarke was sounding unruffled I was beginning to get that nausea in the pit of the stomach again. The feeling of four years ago came right back. I'm sure I still have irritable bowel syndrome as a result of watching England trying to knock off 130 against wicked Warney. As opposed to Ponting, who must have irritable bowled syndrome, heh, heh.

Curiously, when I got to the Blue Bell for a lunchtime glass of your cheapest cava, there seemed to be an awful lot of employed people imbibing medicinal refreshments to overcome something that 'could well be swine flu'. At least that's what the SMS to their workplaces said.

There's one thing the result at Lord's has proved: we must do everything in our power as a nation to achieve three things: world peace, the arresting of global warming, and the maintenance of Andrew Flintoff's Test career. I've got a plan:

1. Find some young strapping lad who's willing, for the sake of his country, to give up his knee for a transplant. A small fee and free tickets for every Test Match should suffice. 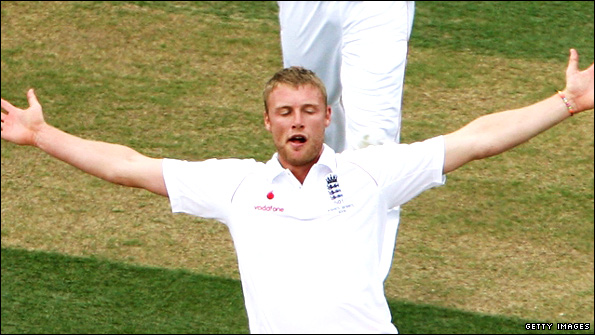 2. Give the man a shocking ultimatum: no Tests, no beer. It's as simple as that. You can do as much faffing about with Twenty20 as you like but we can guarantee your dressing-room mini-fridge will be drier than the wife's sponge cake.

3. Emotionally blackmail the bloke. Tell him if he doesn't play we're going to bring back Darren Pattinson or Liam Plunkett. Failing that we'll maintain a 24-hour vigil of sobs and wailing outside the man's house until he gives in.

Then again, maybe, just maybe, the decision not to carry on after the Ashes has freed him up to just run in and bowl like the utter BFG he is. (Big Friendly Giant, unless you're Australian).

You have to say that if there is a God then he was working in England's favour. The weather, the decisions, the fact that the Aussies displayed dodgier pulling techniques than a tipsy Teessider in a tawdry nite-spot. Even the end of play on Sunday night fitted England's bill perfectly.

This Ashes series is already developing into a classic. But if Fred's unfit, you can't see our lads taking 20 wickets every time. Remember the hoo-hah about Beckham's metatarsal? That's nowt, nowt compared to the Battle of Flintoff's Knee. (With a nod and a wink to Mr. Cink, thank God he's ours.)