One thing I really like about sport is that by and large the best man wins. If you're not good enough, you'll lose. There's no getting away from that. And if you're not up to scratch, you have to go away and try a lot flippin' harder next time.

Wimbledon is full of talented players but you get the impression that the ones at the top of the game at the mo are the ones who have put the most work in.

They've tried their best to pretty up Murray in the Radio Times but it's not his Kournikova-esque eyes that have got him up to number three. 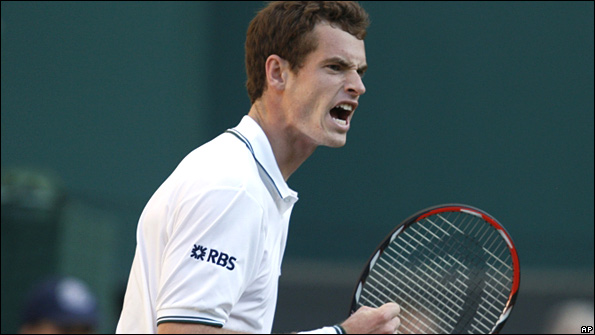 It's more that the lad's worked like a demon on his game - and them spindly stork-legs that cramped up after a couple of hours are now thundering great trunks that hustle him about the court like, well, like a Nadal with new knees.

Andy Roddick hasn't stayed in the top eight on natural talent. Frankly the bloke's got two shots: a serve and a forehand, and both of them have all the subtlety and nuance of a Katie Price Twitter outburst.

(People keep encouraging me to get on them Tweety Bookfacey things but do people really want to read stuff like 'Robbo is on sofa thinking how the fridge should be closer.... Robbo is letting rip continuously on the back of a lamb madras... Robbo is awake... blah bleeding blah...')

But Roddick keeps working at it. Even if it's difficult to suggest his game has one dimension let alone three, he keeps working at it. And he gets the results - not least this lass he's married, Brooklyn Decker. I know - sounds like a bus, doesn't she? A-Rod apparently fell for her after flicking through the bikini section of Sports Illustrated magazine. Eee, I wonder what they chat about, eh?

Every year Wimbledon comes around and we have to put up with two days of national blinking embarrassment. Why do the tournament organisers hand out these cheques for £10,000 - sorry, wild cards - to a bunch of underachieving no-marks who don't deserve to have a first-round berth in a major?

My mate Tony Thompson says we should give each one of 'em 10 grand before Wimbledon starts and tell them to make themselves scarce.

For God's sake, there must be hundreds of more deserving lasses and lads out there from all over the world who haven't been living off the grass-court drip-feed but scraping together money from here and there just to get from A to B.

Alex Bogdanovic was quoted as saying "I'm getting better every year. I'm confident. I just need to play a few challengers, win some matches and then I'm going to start playing more ATP qualifiers." How in God's name did he work that out?

Yes, I think Middlesbrough FC are really getting somewhere too, mate. Better? Confident? You lost in straight sets! You lost for the eighth time in a row in a first-rounder! It could be that you're just a bit rubbish, son!'

Josh Goodall put up a fine fight against some Frenchman with a Welsh name - Llodra? - but at 4-5 down in the fifth you just knew he was going to bottle it.

Someone called Katie O'Brien and someone called Georgie Stoop did the same thing. And that's just it. It's like nails down a bloomin' blackboard every time we hear about the latest 'plucky', 'brave', 'tenacious', 10-grand-richer LOSER!

The lasses are no better. Baltacha got through - and cried so many flippin' tears they were thinking of putting a roof on Court One 'n' all. All right, love. Never mind blubbing. Let's win two matches, eh? I feel a bit sorry for Keothavong 'cos at least the lass has made a lot of progress this year but... FOR GOD'S SAKE, LTA.

No wonder Murray's lamenting the absence of any ability in the players behind him at the mo. I'd be getting small tears in intimate muscles if I had to line up for a Davis Cup match with this lot.

You might think I'm being harsh but I think we need to line all these also-rans up in front of someone like Paul Robinson (the goalkeeper, not that bloke from Neighbours) and he can give them all an almighty kick up the backside. Hard enough to kick them into the nearest strawberry stand.

It's not good enough to faff about, get the odd notable win at Wimbers and finagle yourself a com-box contract off the back of it. It makes you appreciate Henman a lot more. He was made of the same stuff as these tennis club toffs and yet the bloke made four semi-finals and flew the flag as best he could for years. 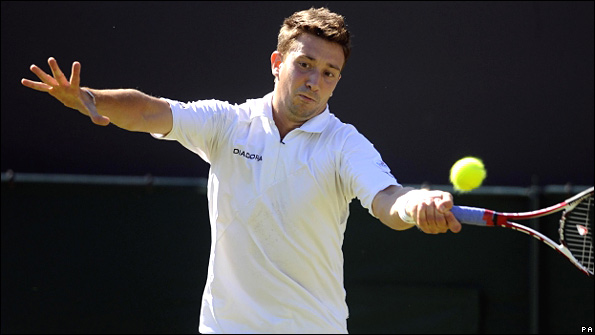 Sometimes it feels like the stripy blazer brigade of cheery amateurs is still pulling the strings in SW19 - 'Give our chaps a little pop of Johnny Foreigner, see what they can do!' Well no. No more hand-outs to the flops. Let them qualify. That's what happens in every other walk of life.

You don't expect a failed medical student to be given a wild card in to your local GP practice, do you? You don't expect your kids to be taught by some half-fit numpty who once spelt a whole sentence correctly.

You don't expect your letters to be delivered by a geographically-challenged idiot, just 'cos he's got his own bag (admittedly that may be what they've done with the postie on our street but that's not the point.)

If we carry on like this we'll have the Cheeky Girls playing the Royal Opera House, the new Poet Laureate will be Wayne Flaming Rooney and the new Speaker of the House of Commons will be John Prescott.

You shouldn't be able to qualify for the most prestigious tennis tournament in the world 'cos your mum happens to have the right *!%!*?! passport!!!