Nice to hear Arsene's convinced his team can turn it around against United. He might just be the only one. The Gunners were very fortunate to have an inspired keeper on Wednesday night. Almunia was top-notch. Give that man a flippin' passport.

There was a time when Manuel seemed to resemble his Fawlty Towers namesake (around the same time that Lehmann was wandering around like a bewildered Dave Beasant) but clearly those days are long gone.

He needed to be tip-top first half, though. I don't mind admitting that I was a Gooner for the night, and it was bloomin' frustrating. It was one of them pretty triangles days for Wenger's men. Sometimes you think Pythagoras must be on the backroom staff.

And Adebayor had one of them useless shambling performances where he looked about as threatening as a rag doll. You know Arsenal are struggling when Nicklas 'I should be starting every game' Bendtner comes on. (He does start every game - on the bench. Quite right too.) Sure enough it wasn't long before the Grate Dane Bendtner-ed a header into the stands.

United on the other hand were dead good. My mood wasn't helped by the sudden and miraculous influx of United supporters into a boozer that has barely seen one of them in years. Unsurprisingly a fair few of them were a bit la-di-da (pinstripes and go-faster specs 'n' that) - they've clearly decided which team to support by looking at the league table and saying 'I think I'll support the chaps at the top! Rah-rah!' 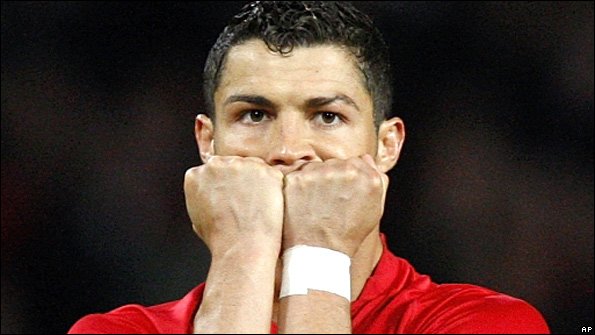 They also seemed to think that the major prerequisite of being a footy fan is to utter foul oaths and curses throughout the game. Now, granted, it helps me get through a Boro fixture - in fact this season it's been flaming obligatory, but when the f-word comes out of the mouth of a toff it just sounds, well, a bit forced.

Their blue-eyed boys did them proud, mind, but for some less than sharp finishing. After United's goal, me mate Tony Thompson said he didn't realise there were two O'Sheas on the pitch. John O'Shea and Ricochet. I didn't want to pass that on but he insisted.

The biggest cheer in the Bell was reserved for the early departure of Rio. Fergie's already talking up his team B and we are delighted he's so keen to give them a day out in the smog.

Hopefully the Tumbler will be wrapped in cotton wool somewhere safe and warm too. I did wonder just how popular young Cristiano would be were it not for the fact that he comes across as a bit theatrical. There was a particularly noteworthy hissy fit on Wednesday which even had the United groupies chuckling into their continental lagers. There should be a way to censor that sort of nonsense.

Me, I'd put a little wendy house halfway up a terrace and send any little stroppy-pants up there and make them sit looking out of the window for two minutes. At the end of that period the ref can return to the wendy house, open the door, ask them if they're going to play nicely and if they're still going off on one then they stay there. (Plus, chances are that Fergie will already be in there so that's a good encouragement to get out and get playing again!)

Tizzies aside, if you can just watch the bloke play it really is a thing to behold. He's as good as I've seen.

The prospect of a United-Chelsea final looms again, though. I'm not looking forward to that. JT'll be screwing his extra long studs in as we speak.
I've tipped Chelsea to bag the whole shebang. If that happens, you can imagine that Guus Hiddink will not be able to sleep for the constant arrival of pleading telegrams, bunches of flowers, and the keys to luxurious yachts and cars and private aircraft. I hope the man sticks to his word and leaves. What an utter triumph that'd be!

Terry Venables' brief stint as England manager was almost as glorious and had he not come back as Smiley's number two and brolly carrier, we'd still be thinking fondly of him today. The position of Chelsea boss doesn't strike me as the most comfortable seat in the world, and how could Guus beat a Champs League title anyway?

These two-legged affairs are not for the impatient, are they? I'd prefer one-offs in a neutral venue, but where's the shedload of cash in that, eh?

Funny how my tolerance is infinite when it comes to the snooker, mind you. I'm the best theoretical snooker player in the world, bar Willie Thorne. They say it's a sign of a misspent youth and it's true to say that I skipped a hell of a lot of lessons so I could watch it on the telly.

Higgins continues to scrape through in fantastic matches, which is all the more remarkable when he looks so much like Stan Laurel. I half expect him to drop the rest on the pack of reds and leave a great rent in the baize every time he gets to the table.

If he meets Murphy in the final, I advise the big lad to wear a little tache and we'd have comedy heaven. Is it me or has Murphy got an enormous bonce but a face that only seems to occupy the bottom tenth of it?

The tigerish little colour-blind fella Allen's a good watch too, having abandoned the joke hair colourings of last year. But I think the winner will be the Aussie with a sheepskin rug on his head. That's a hell of a lot of effort to go to make yourself look a right mess, son.