A strange thing happened to me at the Riverside on Saturday. It may surprise readers that it has never happened before - but the air was warm, I had too many coats on, and all right, there was that extra pint of cider before heading off to the match - and when we got there, there was a suspicion that the stadium had been renamed the Trappist Riverside it was so quiet - and blow me if I didn't fall asleep.

I was awoken by the bloke next to me pushing me in the gob and clearing a slew of spittle off his parka. That wasn't the most shaming thing though. It was simply that, in the midst of a relegation dogfight, I lost focus.

It was like Rio Ferdinand circa 2004. But when I watched the highlights of Boro-Wigan on Match of the Day and nodded off again. Calling all insomniacs. The Riverside has the cure! On the other hand I did revive into a growl at the highlights from Old Trafford.

It was one more of them games when you think the men in red can't lose. Rafael's pull-back on Pedersen would've been a penalty anywhere else on God's green earth. Even an Amazonian toddler, whose only contact with so-called civilisation was a quick chat with Bruce Parry, would have said there was definitely contact.

Mike Phelan says people will be saying no-one ever gets a pen at Old Trafford. Yeah? Why's that? Cos it's true, Mike, that's why! And when they do (Pompey, FA Cup, last year) the officials get an industrial-strength hairdrying from the Grim Knight of Govan.

Now I'm prepared to overlook the fact that the reason not many teams get spot-kicks at Old Trafford is cos very few of them actually get inside the United penalty area unless it's on a Guided Tour Bus with a Sir Bobby Charlton pre-recorded commentary. And I don't think Pedersen helped himself, either. He went down like an extra from Platoon when a little bit of effort could've seen him get through for a shot on goal.

The sigh of a sleeping newborn could knock the average Premier League striker off his feet these days. We used to expect a clog or two and learn how to avoid it but gone are those times when a George Best could be seen skipping tackles like a skimming stone. 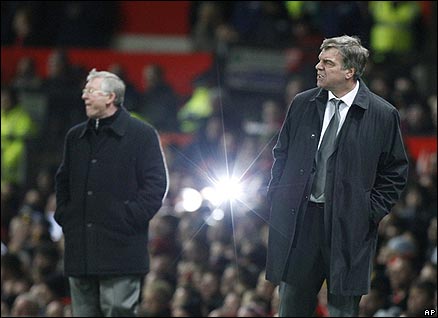 Now defenders are reduced to standing still with their hands in the air like cashiers at a bank robbery while the thieves attempt to dive over them anyway and steal a result. It's ugly stuff. Ricky Villa, John Barnes, Maradona (the one involving not the hand, just the God), Ryan Giggs... we won't see them goals again.

It'll just be tumble and take the free-kick, rather that than risk a truly memorable goal. You watch a kickabout on a park and the kids seem to have translated the phrase 'Penalty Area' as 'Fall Here'.

They virtually practice leaving the trailing leg behind and squealing their little tonsils out. Some nine-year-old won a pen the other day while I was off to the Blue Bell for a lunchtime pint and I was so enraged I dragged the little waster off the pitch by his polyester collar. His dad wasn't having that. He blew his whistle, showed a red card and told me to let his son back on the pitch to complete his hat-trick. Nowt changes, eh?

While Howard Webb missed Rafael's obvious indiscretion, he didn't missed Ronaldo's plummet. There should be a three strikes and you're out policy over 'simulation' (a word that pretends it's not what it is - like 'quantative easing' or 'efficiency drive' or 'ball to hand' if John Terry's involved.)

If you get three cards for diving, either from the ref at the time, or after the FA have looked at the post-match evidence, then you get a five-match ban. Automatic. Or the ref just gets a mask and snorkel and makes him play the rest of the game in them. And that goes for the other serial fallers too - you know who you are... I sometimes think if you picked your top Premier League XI and stood them in a line they'd fall over like a pack of dominoes.

Man U won cos the circus act still has a trick or two that can impress. The free-kick was one of them ones that defies physics and took the trajectory of the scariest ride at Alton Towers. Liverpool's season appears to be travelling like Homer Simpson down a cliff face. Rafa's still talking the talk, but no Alonso or Gerrard meant a midfield with all the invention of an England bowling attack and the title's gone for another year.

Just why Benitez thinks he can get away with not penning a new contract is beyond me. His position grows weaker every time he selects Lucas. Maybe he's got somewhere else to go and he'd like to be pushed.

Still at least no one on the Kop appears to be dozing. I doubt there'll be any Scousers bringing their sleeping bags to our gaff next Saturday either.
Me mates down the Blue Bell reckon I need a few iron tablets or summat.

But I reckon there must be others of you out there who have snored through 20 minutes of top-flight footy. Fans of Fulham, Everton, Wigan - surely you can't possibly have been able to do four pints, pie and gravy, and keep your eyes open for a full 90 minutes given the tedium thrown at you this season?

The wife says it's old age. I just reckon I wanted to dream meself back to a time when football's forwards took the rough with the smooth and the only thing that went down too easily was a pair of unbelted trousers.