It's time for Robbo to give you mirthless masses (try saying that after a Dubonnet or two) his predictions for 2009.

So here comes the first six months (with the rest to follow next time)...

January
The Great North Run begins early as half the Newcastle United squad take the phrase 'transfer window' a bit literally and climb out of one at the Gallowgate end and pelt off south for a bit of warmth and wealth elsewhere.

Joe Kinnear is shocked to discover he's lost his entire back four but Shay Given reminds him that he didn't see any of them during the thrashing against Liverpool either. Shay adds that he's seen better marking from your average schools examination board.

Kinnear feels better when he learns he's won the award for World's Oldest Mullet.
David Moyes signs Jo from Eastlands, much to Kenwright's outrage as he was hoping for a big-name striker and Jo's only two letters long. Meanwhile Man City's owners hand Mark Hughes their January wishlist - it's a book of Panini soccer-stickers with the ones they want highlighted in green pen.

Andy Murray wins the Aussie Open (why not?) in a manner so grumpy he makes John McEnroe look like, well, Tim Henman. And the Australians love him for it.

February
The Six Nations begin with England trailing by 10 points with two minutes to go when Martin Johnson brings his trump card off the bench. Kelly Brook sashays down the touchline pursued by the Italian first XV while her fella Cipriani runs in a hat-trick.
Meanwhile Capello's England hammer Spain 4-1 with a hat-trick from Agbonlahor and footballing widows everywhere are freed from their torture as Fabio opens the first ever Capellite monastery for believers across the nation.

Joe Calzaghe announces his retirement but agrees to fight Evander Holyfield from the comfort of his armchair.
And as England return to the West Indies it's WAGs night at Stanford Towers. The lasses unfortunately share his 20-20 vision and dash in the opposite direction.

March
Wales continue to romp through the Six Nations with Shane Williams scoring a try that leaves the watching public as dumbfounded as he sounded on Sports Personality of the Year
. (Trying to pull that lad down is like trying to hold on to a greased trout in a bubble bath.)

England move on to the one-dayers with KP in positive mood following a narrow Test series victory, but there's insufficient firepower in England's top seven and the Windies trounce the boys.

In Russia Valuev and Klitschko face each other for the world heavyweight title. You've got time to go for a cuppa in between the punches. It's like watching two brachiosauruses trying to fight their way out of a swamp. Despite the pointlessness of the bout, Klitschko wins on points. Steve Bunce blames the KGB.

The Champions League resumes and Jose Mourinho returns to that OT touchline in charge of Inter. Fergie signs Dean Windass on loan to spend the entire match jogging along the touchline like some Humberside bully-boy bouncer just in case Jose fancies a jog after an Inter winner. It works and United sneak through after Toldo drops the ball under pressure from a gurning Carlos Tevez. 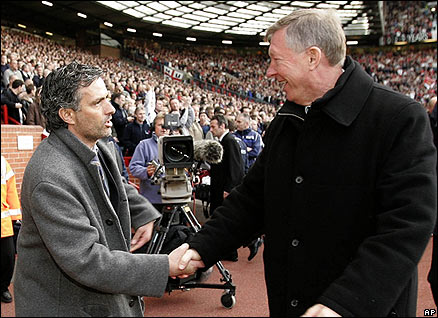 In other games, Ranieri makes three changes to the line-up at Stamford Bridge during half-time but Scolari tells him he's the Juve manager and Claudio explains that he just couldn't resist.
Liverpool thump Real Madrid and Arsenal fail to get past Roma. Wenger is appalled by the regular attempts by Roman players to tackle his team when they had possession and calls on Uefa to do something.

April
Tiger Woods is back and looking trim at Augusta, only to have his arm injured by Boo Weekley, who mistakes the great man for a moose and shoots at him from the 13th tee. Woods carries on forlornly, playing with just one arm and can only manage to retain the title by seven shots.
England face Ukraine on April Fool's Day and they think the opposition are having a laugh when they pick that crap bloke who used to be at Chelsea. He scores a brace but England get a late equaliser from one D. Beckham who's been looking hot in Milan's colours. He hasn't been playing any games, mind.

Hull City are now truly in the relegation mire after defeat at Sunderland and a 4-0 deficit at half-time at the Riverside. Phil Brown makes his team strip in the centre-circle while he sprays them with a water-cannon after which loan signing Ricardo Fuller slaps each and every one of them across the chops with all the power of a girl trying to dry her nail-varnish. Barmby scores the injury-time equaliser and Brown is offered the freedom of the town by the Hull Naturists Society.

The credit crunch has torn F1 asunder but the Beeb do their best to beef up the coverage, despite the fact that Lewis Hamilton et al have to put their own petrol in their own cars and change their own tyres like the rest of us. As a result it's a lot more interesting all round.

May
On the final day of the Premier League season only United, Liverpool, Chelsea, Arsenal and Aston Villa are safe from relegation. There's three points between everyone else. Unbelievably Spurs (Carling Cup winners in 2009 of course), Newcastle and Man City (despite a brilliant hat-trick by Kaka) all go down. Man City are sold to Alan Sugar for 20 quid.

United win the Premier League and the celebrations last a week - in Kuala Lumpur.
The FA Cup is won by Middlesbrough... I say that every year... then I always correct meself and say I fancy Villa... and then they draw Man Utd in round four and they're mincemeat. So that's Boro or Villa then.

The Champions League final is a rematch of last year. But this time Chelsea take the spoils after John Terry, wearing nine-inch studs, slots home the penalty. Ronaldo bursts into tears and rushes into the consoling arms of Ramon Calderon.

June
Stuart Pearce gets a full squad of the best of England's young players for the U21 Championship after he goes round all the managers' houses with Phil Brown in attendance and has a word. Quite right too. Good ol' Psycho.

More cash problems for Formula 1 mean that Lewis Hamilton wins the British Grand Prix in an Austin Allegro, just pipping Felipe Massa in a Twingo. Massa was given a stop-go penalty for going through Towcester High Street in third gear. Shocking.
Rafa Nadal wins the French Open without dropping so much as a fart, never mind a set.