Oh no, not another mid-season non-event designed by Fifa's financial wing to spin a few more yen their way. What the heck are Man U doing travelling halfway around the world to play Gamba Osaka?

The 5-3 training exercise was flattering to the inevitably 'plucky' Japanese side - and now United face some mighty powerhouse of a side from Ecuador (who are notoriously poor at sea level but ruddy fantastic over 2000m).

Club World Cup my backside. I see it also features an Egyptian side (presumably deploying a 4-3-2-1 pyramid formation) and Adelaide (with their 1-2-3-4 formation - 'cos it always goes the opposite way round in the Southern Hemisphere, doesn't it?)

It's not as if United are going to be encouraging their players to go hell for leather against a bunch of technically efficient but globally irrelevant opponents. They'll be approaching the games with all the enthusiasm of a toothless pensioner tackling a whelk.

They may get a tin pot out of it and get called the club champions of the world, but it means little more than nowt, this shindig. It's not a football tournament, it's a trade fair. It's a lot more important to them who they might get drawn against in the Champs League, frankly. 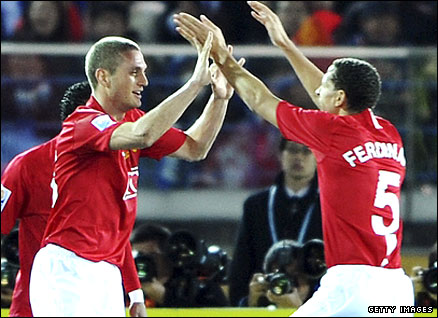 Giggsy made all the right noises, but then as a senior player that is his job. He can hardly clamber down the steps off the plane and say: "Well we're all right racked off we're here. It's all raw fish and feng shui and I can't wait to get back home and have a proper cup of tea!"

No wonder Fergie's dead against the now mythical 39th game. Every time this laughable subject is raised it always suggests some sort of hopeless Hollywood blockbuster. Liam Neeson plays Scudamore, a man on a mystical search to find the place that is destined to host game 39, a thought that came to him in a dream after one too many cheese sandwiches before bedtime.

With cold fish Brit Ralph Fiennes as the hard-hearted Lord Triesman, and Juliet Binoche as Michel Platini. All goes well until standing between him and the entire Indian market is Sepp the Batter Blatter (played by Mike Myers) and his trusty henchman Fergie (the Oscar-nominated Jimmy Krankie).

What's been more interesting is Rio's sideswipe at the Gooners which was more than a bit dismissive, but fair enough given Arsenal are currently about as predictable as the bowel movements of the jalapeno chilli-eating Champion. Villa could well pip them to the top four now that Ashley Young has been called a genius by that master of understatement Martin O'Neill.

What's even more interesting is that Real Madrid continue to leak stories like a Home Office mole, especially when it comes to Cristiano Ronaldo.

It's so typical of Real to accidentally let this sort of drivel slip out just to crank up the pressure on United and the gelled tumbler himself but it's really bloody tedious the way it carries on.

There's the leak, the denials, and of course the Fergie tizzy fit. There's an air of inevitability that the Portuguese Sultan of Simulation will end up at the Bernabeu but why all this cloak and dagger rubbish?

Is it simply that Real Madrid have always conducted their big money transfers this way? And maybe it's that Man U take umbrage a bit too easily when the biggest boy in school tries to nick their best conker.

In the meantime, the wheeling and dealing for the next window is already starting with Robbie Keane sipposedly out of Anfield at the first opportunity. For me it's just another example of where Benitez fails as a manager - £20m for a bloke who doesn't fit the team and would rather be playing in Gerrard's place, when he's half the player.

Rafa just hasn't cut it in the transfer market, Torres aside, particularly in the wide areas. There's even a chance Keane'll be flogged back to Spurs for a quarter of the price (with a few instalments wiped out maybe, if THFC are feeling generous). This could represent the dopiest single bit of transfer business in the last five years, couldn't it?

I can't think of owt worse offhand, although I'm sure you'll correct me. Levy'll be hoping Benitez is in the market for a few more Spurs cast-offs in January... at this rate they'll be competing with Chelsea and Man City for the big names come 2010.

Not that Keane should stay with the Reds given his current form. The lad who comes off the bench from time to time seems a much better bet, and might soon lead to questions about how you're going to Stop Ngog. 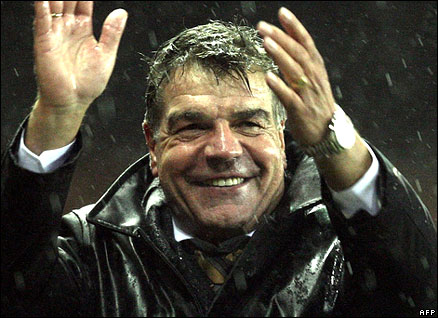 Finally, welcome back to Premier League management Big Sam. Pigeons and low-flying aircraft beware. (Not to mention Arsene's wee timorous beasties). I look forward to the man whose face looks like everyone else's face in the back of a tablespoon folding great planks of chuddy into his great gob and barking out the orders once again.

While I've never been a fan of the way his teams played, he wasn't exactly given the time to make a difference at St James' Park and anyway he was really just the shepherd for the first team while all the while Ashley was priming the whole of Tyneside for the second coming of the Messiah.

I'm sure he'll lift Blackburn out of the mire. I'm a bit sad for Ince, who may well have been out of his depth but also might've been able to learn on the job, given time. Except time is summat no manager gets these days. As is always mentioned, Fergie could have been out on his ear were it not for a Mark Robins winner some 20-odd years ago - and now look at him!

Playing not so much a match as a Fifa ad in far-flung Japan and hoping to God he doesn't lose a couple of strikers and a centre-back through injury. Just for today, I don't envy the bloke one bit.