Has it ever occurred to the lot of you that Robbo hates diving? The worst offenders in recent weeks have been the neurotic ninnies of North London, the Gooners (not all of you, of course, but definitely some of you). This blog is Arsenal-hating apparently.

Well listen up and hopefully the next time the Emirati get a bit of a poke in the ribs from me they'll remember this. I think Arsene Wenger has done more for Premier League football than any other manager. (Calm down you citizens of Cornwall and Kuala Lumpur - I mean along with Fergie of course).

Now don't get me wrong. I still have me complaints about the bloke. The prissy hissy fits are downright monotonous and they need to stop, 'cos he's getting more and more like that eejit Louis Walsh. Wenger's been here 10 years now and if he thinks a bunch of lunks like Stoke City are going to be playing one touch against his lot then he's got bouillabaisse for brains.

I don't appreciate the indifference to English talent up to yet either but then you listen to Bentley and you understand why Wenger might have wanted to get shot of his mouth, if not his talent. It's even more miffing when you see what he's done with Walcott - but hopefully Wilshere and co will come through and that particular high horse can be reduced to a Shetland pony in time.

And he's up there with his purple Knightship when it comes to the 'everyone against us' nonsense and how officials pick on his lads. Arsenal used to accumulate red cards like Brangelina accumulate kids so it's always rung a little hollow. 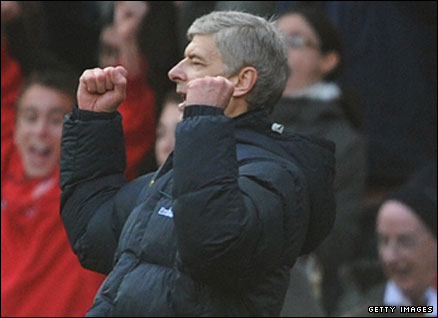 Oh and why is it that Arsene's players get tired before everyone else's? (Well it might well be that some of the teams he puts out should be in bed by 9.30 so it's no wonder the last 10 minutes on Euro nights is a struggle).

At his worst, Wenger somehow manages to be neurotic and superior at the same time. I mean if I've got a chip on my shoulder, Arsene's got a bumper side-portion of frites on both of his.

But then again, then again, the bloke is an artist, isn't he? And artists are allowed, so I'm told, to be contradictory and complicated, 'cos in the end you'll get a little bit of genius. And if you want to know what Wenger has brought to English football, it's best to ignore the sniffy side-swipes and just watch his team play.

I'm not a baseball fan but I'm always impressed when you see fielders whanging it about through three or four pairs of hands and running out three batters in one go (I bet there's some retch-making American abbreviation for that, like out-threeing or a tri-down - I'm sure someone'll tell me).

Arsenal at their best are like that, times 10. Sometimes you'd think the ball was metal and their boots were magnets. The 5-2 demolition of Fenerbahce was a case in point.

To me, despite my irritations, the bloke is unsackable. Think about the club he took over, after all. A club built on bloody-mindedness and a defence so mean-spirited they'd have laid a pile of pensioners across the goalmouth if they could have got away with it. Come to think of it, by the time Wenger arrived a lot of them weren't far off getting their own free bus-passes, were they?

I mean they weren't unsuccessful, Arsenal, but Wrighty aside it was a toss-up whether you would watch them or sit in a bath of condensed milk while listening to Bryan Adams' Greatest Hits and sticking rusty safety-pins through your eyelids.

But then there was Arsene - and Bergkamp, Pires, Henry, Overmars, Fabregas... in short a bloody feast for the eyes... footie so good you could taste it.

While the rest of us are making do with some greasy burgers from the van at the end of the road, Wenger's managed to do the football equivalent of Jamie Oliver's feed your family for under a fiver.

Cos somehow he dips his net through the murky pool that is world football talent and comes up with the perfect fit for his club. Young, neat, athletic, cultured, a bit too French and just a little too easy to knock off the ball. But really, really great to watch and bloody cheap for this day and age.

So the club were in crisis during the last 10 days, 'cos of two long throws and a Spurs team that seemed to have been blessed by higher powers. (If Darren Bent scores five in two then you know damn well that the Gods are looking down and having a right old bloody laugh.)

Michael Essien suggests the Gunners need to start winning ugly. Well you know what, maybe they are too pretty. Maybe they rattle like ill-fitting dentures at the first sign of an alehouse XI coming up against them.

But they do play the game as God - or should that be Clough - intended and the game on Saturday was just an absolute joy, helped in no small part by Man U's play which was pretty damn blissful too. The beautiful game indeed.

They still need to spend - flogging Diarra wasn't Wenger's brightest piece of business - and there's not a team in the country that needs a centre-back like Silvestre.

And at the risk of being slurred with the worst accusation that can be levelled at a Teessider - that I'm a football purist - may I say that I hope that Arsene, whines and witterings and whatever included, continues to put out a bunch of lads that seek to dazzle and delight rather than simply grind out results.

But maybe I'm just being nice 'cos I know they'll struggle to win anything playing that way, eh?