Harry in a hurry

Well it all happened so blinking fast I thought we were going to have to rename him Harry Kidnap! Or as it turned out after a sleepless Saturday night, Harry No-nap.

It must have been like the old punk song. Daniel Levy phones up the Redknapp residence and says 'C'mon! C'mon! 'Urry up 'Arry come on! We're goin' dahn the Lane!'

Cos when you're in the deepest doo-dah who you gonna call? 'Arry 'Oudini. He'll get you out of the tightest scrape. I'm surprised the Cumbrian Police weren't calling him up for a bit of advice on stranded fell-runners.

But he's plenty of other things too. 'Arry won the Cup with Pompey and they ain't gonna win it again for another 50 years. He could've gone to Newcastle but he didn't and they said he lacked ambition - but there's a difference between ambition and insanity. 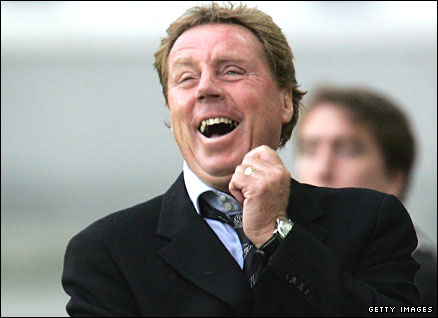 'Arry's got an eye for a player and he knows anyone with a bit of nous and a hands-on style can get even the wilting wallflowers of White Hart lane to start playing well.

'Arry had Bolton at home if he signed up there and then and let's face it, in-your-face and rugged as they are, they're not exactly Chelsea are they? He knows when he's wanted so he says I only do it if you get shot of all these other numpties who seem to think they know players better than me.

Levy agrees because he knows Redknapp is the very least Tottenham fans would accept. The reason Spurs are in this parlous state has got a hell of a lot to do with Levy trying to prove himself a big fish in a big pond when, let's be honest, the bloke's no more than a guppy in an ocean.

The Berba brinkmanship has busted the team that won the Carling Cup wide open. It's an object lesson in how not to broker a deal and it seems that, to his eventual credit, he's realized that getting someone in who knows how to do his job is the best bet.

I feel a little sorry for Juande (At A Time Sweet Jenas)... but he let himself down a bit. He should have got hold of the English language way sooner. There's been some dimwit Brits who have foundered in Europe 'cos they couldn't be bothered to getta to gripsa widda de foreigna lingo and they deserved to fail.

Any normal bloke who was working abroad would make learning the language his first priority. Maybe Rushie was told football was an international language. But the same applies to Ramos. There were more English players at Spurs than at most clubs in the top flight so I didn't think he had an excuse, really.

He's clearly not a bad manager... but you only had to look at the ragbag outfit that took the field against Stoke to realise that here was a bunch of players who just couldn't be bothered to get the boss out of the hole, no matter what they said in public.

Levy admitted that he sounded out some players before he ditched El Grouchio and made his move for the craftiest Cockney since Eric Bristow cocked his little finger. And lo and behold, with Arry on the touchline a bit of gumption was shown.

Even Bentley delivered a nice cross that curved and dipped like the brylcreemed fringe on his pretty little forehead. I hope he starts giving a little more for the new old boy, 'cos his only decent performance this season was his flirt with Gabby Logan on Inside Sport.

'Arry had luck on his side v Bolton too. That was never a pen, while Gavin McCann looked for all the world like James Nesbitt auditioning for another tough-nut role and didn't help his sickly-mustard-coloured mates.

The real result for any Spurs manager is going to be a fit Ledley King. He needs new players for certain but it wouldn't be a bad start to find some dead strong gaffa tape to hold the skipper together.

Second thing he could do with is a keeper who doesn't approach crosses with all the calm and confidence of a Jack Russell after a frisbee. And thirdly, he could do with nabbing Diarra from Portsmuff as soon as he can to toughen up a midfield that has all the menace of four toddlers waving cotton buds.

As for Pompey, well they're all chin up and that, but I'm afraid 'Arry was Pompey. It was him that Defoe and Crouch went for, it was him who all them very large blokes were playing for when they won the Cup and I think it's going to take a special man to take over.

Big Sam's an obvious choice given that, Defoe apart, everyone's seven foot tall and good in the air. But Portsmuff wivout 'Arry is like Torvill without Dean, like pie without gravy, like Ant without Dec (although I'd pay good money to the man who could separate them two).

No, the fact is that Daniel Levy has finally struck a blow for common sense at Tottenham Hotspur Football Club. And after the hiring of Hod from Saints, Jacques Santini, the sacking of Jol and the grubby hiring of Ramos, it's nice to see the bloke can actually carry out a decision in the proper way.

Spurs'll be fine now. Even if their hopes of a top-four finish have been scuppered by Hull City. (No I don't understand that either but it is bloomin' marvellous.)