The return of Fred! Flintoff is back! No booze, no niggles, no arm-bands necessary! But who's he in for?

Will Collingwood step aside? We all like the Durham lad - we watched Colly flower and then Colly Wobble - but surely now he needs a little time on the sidelines with Harmy trying to remember how the game works. Plus he's not been lucky and we want jowsers in the team right now.

But will the selectors drop Sidey instead? The man who looks like he's just stepped off the set of Tommy has had a dodgy back, so it could make things straightforward.

Jimmy A is here to stay now. We've all watched him be as consistent as an English summer but he deserves awards for gallantry for trying to flog that dead horse of a track with twice the vigour of a well-paid escort in a Chelsea cellar.

And what of Broady? Chris's lad is blossoming, that's for sure, but he doesn't bag enough wickets for me and if he's in for his all-round abilities then the bloke who's just joined the 12 is a useful replacement. That'd be my pick. Plus I'd bring in Bopara or Shah to replace Colly.

Meanwhile the selectors are having a stubborn turn over Ambrose. If you're going to have a wickie that can't catch, pick Prior. Matt can bat. You could put five men from cover to gully against Ambrose and he'd never score. If you want a wickie then pick Read or Foster. 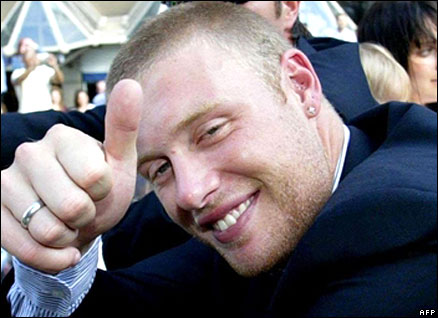 But regardless of who makes way, isn't it grand to see Fred back? Some prophets of doom are telling me that he's never going to reach his former heights and has never been the same since he staggered into Number 10 and his eyes glazed over while listening to Tony Blair (not an uncommon experience, surely?).

Nonsense, I tell them, he's back at full pace, the ankle's fine, the bat's broad and there's not an untethered children's water-vehicle in the whole of Leeds! Any road, if ever there was proof that we needed the fella back it was Sunday and Monday at Lord's.

A mate nearly tempted us down for Monday's play but I made the right decision. No ta, I said, I've got some garden shears that need sharpening, I've got to arrange my CDs into chronological order and then I'm going to watch these planks warp.

Seventy five quid for that stuff all day - you could get bored for the same price but half the time at the opera, couldn't you?

On the other hand, if the tables were turned we would be talking about a heroic rearguard action, wouldn't we? The usual hearts of oak, stomach of lions, minds of steel garbage we throw around when English batters cover up the deficiencies of English bowlers.

Frankly the South Africans owe us at least three days of tedium, don't they?

Mind you dull is what we're going to keep getting at Lord's if the groundsman Mick Hunt (funny how he doesn't call himself Mike) keeps preparing these gentle little tracks for cricketers to play on. I swear to God there's a 15-tog duvet just under the surface.

People are already telling me that Freddie would have got something out of this pitch... like what? A good night's kip? Trying to get a wicket was not dissimilar to attempting to dismantle the Berlin Wall by pelting it with cotton buds. Had Smith and co not batted so uselessly first time around we'd already be praying for rain to bring an early conclusion.

Any road, why go 200-odd miles when you can listen to Test Match Special, which goes from strength to strength. Boycott is great value, especially just after a fortifying lunch when it sounds to me, and I could be guessing, that the Yorkshire Knight has been on the Pinot Savignon or whatever they call wines these days.

He's blessed with as much tact as the Duke of Edinburgh. In fact it'd be great to see the two of them in a room together, wouldn't it?

Boycott: "All right your 'ighness! Bet you 'aven't gorra clue what's going on, 'ave yer?"
D of Ed: "Eeeeee - I pleeyed a lot of crickit at school, ye little oik!"
Boycott: "Yer c'udn't 'av. You're Greek, you! Don't think I've 'eard of Greece in Test cricket, not unless it were slicked through Freddie Trueman's hair!" 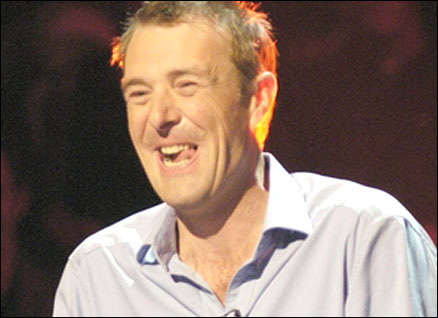 And Tuffers is just plain funny and doesn't mind playing himself up either. CMJ often sounds like he doesn't know whether to get Tuffers' thoughts on Panesar's line of attack or simply ask him to if he could bring tea and tiffin in during the next change of ends .

How refreshing it is to not be constantly thwacked around the ears by the public school conveyor belt of opinion which all too often resorts to a clubby little chat over all sorts of obscure garbage - like the commentary's coming from Lord Snooty and his pals.

Which school has provided the most left-arm over bowlers in England's history? Who had the all-time Varsity record for catches taken whilst carrying a partridge? And whatever happened to that once-vital position, made notorious by the Aussie scallywag Walter Crudley, of silly third leg?

And with Aggers in nominal charge of the caked-up rabble, what could possibly be better? So unless I can lay me hands on a ticket to join the Western Terracists, I'll be curled up next to some more TMS come Friday. And whatever you do, Fred, sir, stay well!