What goes on in the mind of Sepp Blatter?

How in God's name does the tinpot twerp believe that footballers are like modern slaves? We need that David Davies to get behind the PFA as it fights for its members' liberty.

Oh hang on a bit though... them blokes that used to row those massive galleons while some roly-poly fella banged a drum, weren't they all on 200 grand a week?

Oh yeah, and when you think of it, just look at all them luxury state-of-the-art wagons those poor souls went to work the cotton plantations in.

Then there's the lucky gladiators in ancient Rome who cashed in by advertising all the local businesses on their breastplates.

It must be hell for poor Cristiano at Man U, eh? They just force him to take free-kicks and live in luxury and take impromptu diving classes - if it wasn't for Fergie he'd be a free man. In the tug-of-love between Real and United - who do we think is in charge?

And if Frank Lampard is in shackles at Chelsea, how come he's been thriving in a free role for six seasons?

'Blatter' will be in the dictionary before long as a verb meaning 'to spout utter tripe.' Mind you, Lampard is blattering away if he thinks anyone would agree to give a 30-year-old a five-year contract. Chelsea are offering him four - at 130-150K a week - but Frank needs the extra year to 'secure his future'.

No mate, if you want to do that, get a coaching qualification, buy a boozer in Surrey or take a few lessons in TV punditry. You might need to keep your shirts ironed and change your name to Alan, but cousin Jamie done all right, so's I reckon you'll be well in there, me old cockle 'n' pears or whatever the bleedin' eck they say darn the East End these days. 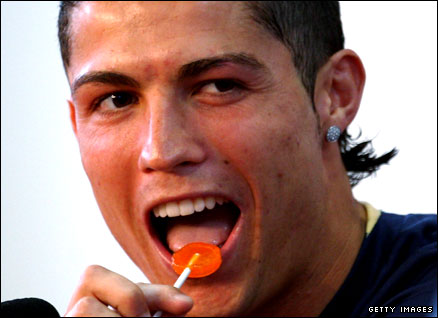 I mean, face it, you're not going to be the box-to-box goalscoring opportunist that the current Blues team sets you up as, are you? Not at 35. Not unless they put a tilt on the pitch and they roll you from one side to the other.

It just goes to show how far out of touch these blokes are these days. Cashley's turgid little tome, featuring the sort of hissy fits that his missus would turn her nose up at, was bad enough. But how Frank can be turning down the contract on offer is beyond any man in the street.

Of course it might just be that he needs a new challenge. Good. Go and have one and stop trying to crank out an extra 12 months from a contract you won't see out any road.

Big Phil (and, ooh, the press say we all love Felipe 'cos he can speak English and be quite civilised really and he doesn't come across remotely like he's Popeye Doyle in a track-suit - and we'll be digging the knife in as soon as we can, don't you worry...)

Big Phil says Frank wants to stay at Chelsea forever, more or less, 'cos he loves it here. Yeah well it's so painfully obvious that everybody player's being controlled by some puppet-master agent or other who isn't content with 10% of their weekly salary. Challenge, my arse!

Securing your future - don't make me beer splurge out of me nostrils. It's naked greed.

Frankly, having bathed in the beautiful game that was so brilliantly served up at Euro 2008, it's bleeding depressing to be reminded about how self-seeking and downright gluttonous footballers and their representatives are.

While Lamps and Ron and co indulge in brinkmanship over a couple of thou a week here and an extra month's work there, Rafael Nadal got his backside over to Stuttgart in person to apologise for the fact that doctors have told him he'll have to miss their frankly unimportant post-Wimbers tournament!

I guess there'll be more idle tittle-tattle from now 'til the end of August while the rest of us start bawling out the bloke in the corner shop 'cos he's put up the price of bread to 70p - a slice.

And dusting off the chopper bikes and pedalling down to the boozer cos we can't afford the diesel.

And growling our way through the rumour mills and disbelieving the swamp of filthy lucre through which the modern Premier League prima donna wades.

But then again you can't blame these slaves for wanting a fair deal, can you Sepp?