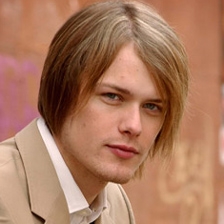 Andrew is living it up as a top footballer in Monaco.

Andrew was the new Golden Boy of the Scottish Premier League. He was born and brought up in Kelso to upper middle-class parents who had high hopes for their only son. Andrew's parents were born into money and couldn't fathom why he would want to slog away in a career when his inheritance is waiting for him. His childhood dreams of hitting the footie big time were realised. He got the lot: money, fame and women. It isn't really any wonder that it's going to his head a bit.
Ambitious and driven, Andrew expects the world to fall at his feet. The word 'no' simply doesn't feature in his vocabulary. After a rocky start in Shieldinch he admitted he'd fallen for Kelly-Marie but his family thought she was too common for him. They hoped she was a rebellion he'd get bored of but he asked her to marry him and whisked her off to become a proper footballer's wife as his career took them to Monaco.

Unfortunately, Andrew's new lifestyle got too extreme and he kept cheating on Kelly-Marie. When she headed back to Shieldinch for some 'headspace', Andrew gave her an ultimatum: him or Shieldinch. Kelly-Marie chose Shieldinch and bruised his ego. In retaliation, Andrew immediately got engaged to someone else and sold his story to the papers!

Most recent posts about Andrew Murray

This blog comes to you direct from backstage at BBC Scotland's continuing drama River City.

You can stay up to date with River City Backstage Blog via these feeds.