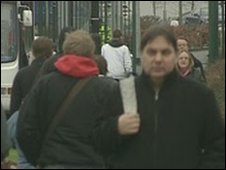 How many times have you seen an MP excitedly welcoming the arrival of government jobs into their constituency?

Quite a few judging by the growth in public sector employment in the North East in the last decade.

Some new research by BBC Newcastle has found that around a third of people in the region now work for the public sector - the highest proportion in the country.

But now think how many MPs will be bemoaning the loss of those jobs if, as many expect, big government spending cuts lead to significant redundancies in the next few years?

And also think how that might affect any tentative economic recovery.

But of course the economic impact won't end in the councils and government departments which shed jobs.

Those organisations also contribute to the wider economy - directly in terms of contracts for the likes of stationery, indirectly through the salaries of their employees.

So we all may suffer if substantial job cuts really do happen.

Of course, all this is for the moment theoretical. We don't know who'll be in government, and how deep they'll have to cut.

But for the North East, the figures may be indicative of deeper problems within the economy.

As Professor John Tomaney from Newcastle University points out, it's not that the region has more public sector jobs than anyone else.

It's the private sector that isn't as strong, so making the public sector look more significant.

That's not to say there hasn't been progress in the last decade. Employment has grown, new industries have emerged.

But more of BBC Newcastle's research - released tomorrow - also reveals how relatively poor the region's record is in terms of business start-ups.

The country may be officially out of recession, but the North East could have more problems ahead.

I'm Richard Moss, the BBC's Political Editor for the North East and Cumbria. Welcome to my irreverent - but hopefully insightful - northern take on reporting politics for Look North and the Politics Show.

You can stay up to date with Moss Missives via these feeds.