This week has been quite a week for some of BBC R&D's current research projects getting air time. A team of us from the North Lab helped The One Show draw a giant Christmas Tree using light painting, and halfRF HD cameras were used for the live broadcast from television centre. This post is about a radio drama that was broadcast on Saturday on Radio 4. It is an adaptation of Carlo Collodi's Pinocchio. Linda, the script writer, has written a blog about adapting the story that you can read here.

Radio drama production workflows have developed over the last 60 years, but the productions are almost always a mixture of microphone recordings of live actors' performances, recorded Foley effects, sound effects from libraries, and music either from a composer or a music library. These sources are then mixed together to create a stereo (two channel) file which is played out for the broadcast. Recently a few radio dramas have been produced in 5.1, for example earlier this year Private Peaceful was mixed to 5.1 and then rendered to binaural using virtual speakers. This involves the creation of two mixes, a stereo (two channel) file and a 5.1 surround (6 channel) file. The creative process of mixing to these formats had to be performed twice, once in stereo and once in surround. 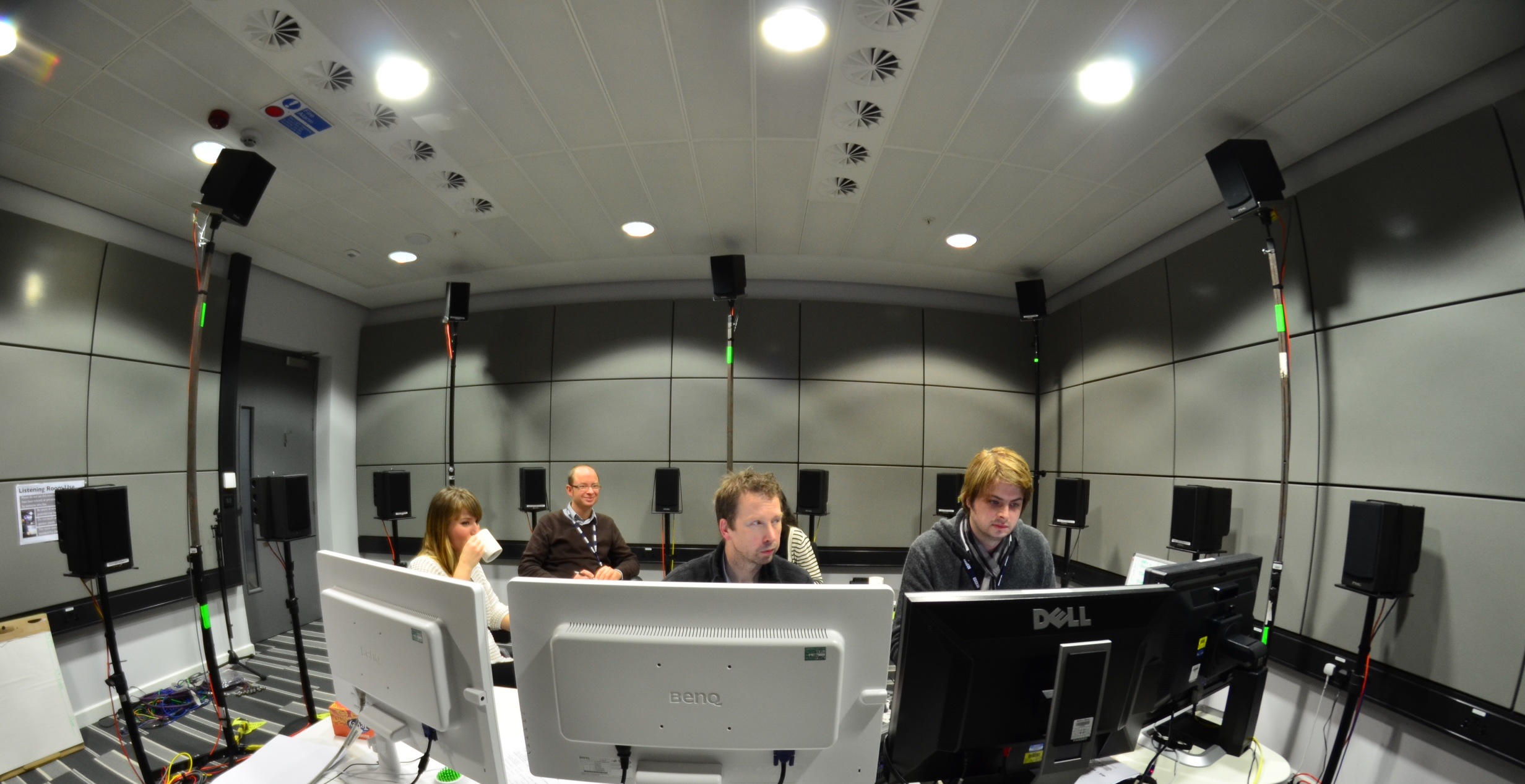 For Pinocchio we did something a bit different. Steve, the sound designer, and I mixed the recordings, treating the sources as "audio objects". This means that rather than making a stereo mix by panning sounds somewhere between left and right speakers, we forgot about speaker locations and positioned audio objects at locations in space. This means the final mix, rather than being a stereo or surround sound file, is actually a set of audio objects, each with accompanying metadata to describe things like the source level, azimuth, elevation, distance, etc. This data is then rendered to speaker channels before broadcast (in the case of this experiment) or at the listener's home/device (potentially the case in the future).

There are a number of potential advantages to describing audio scenes in this way: 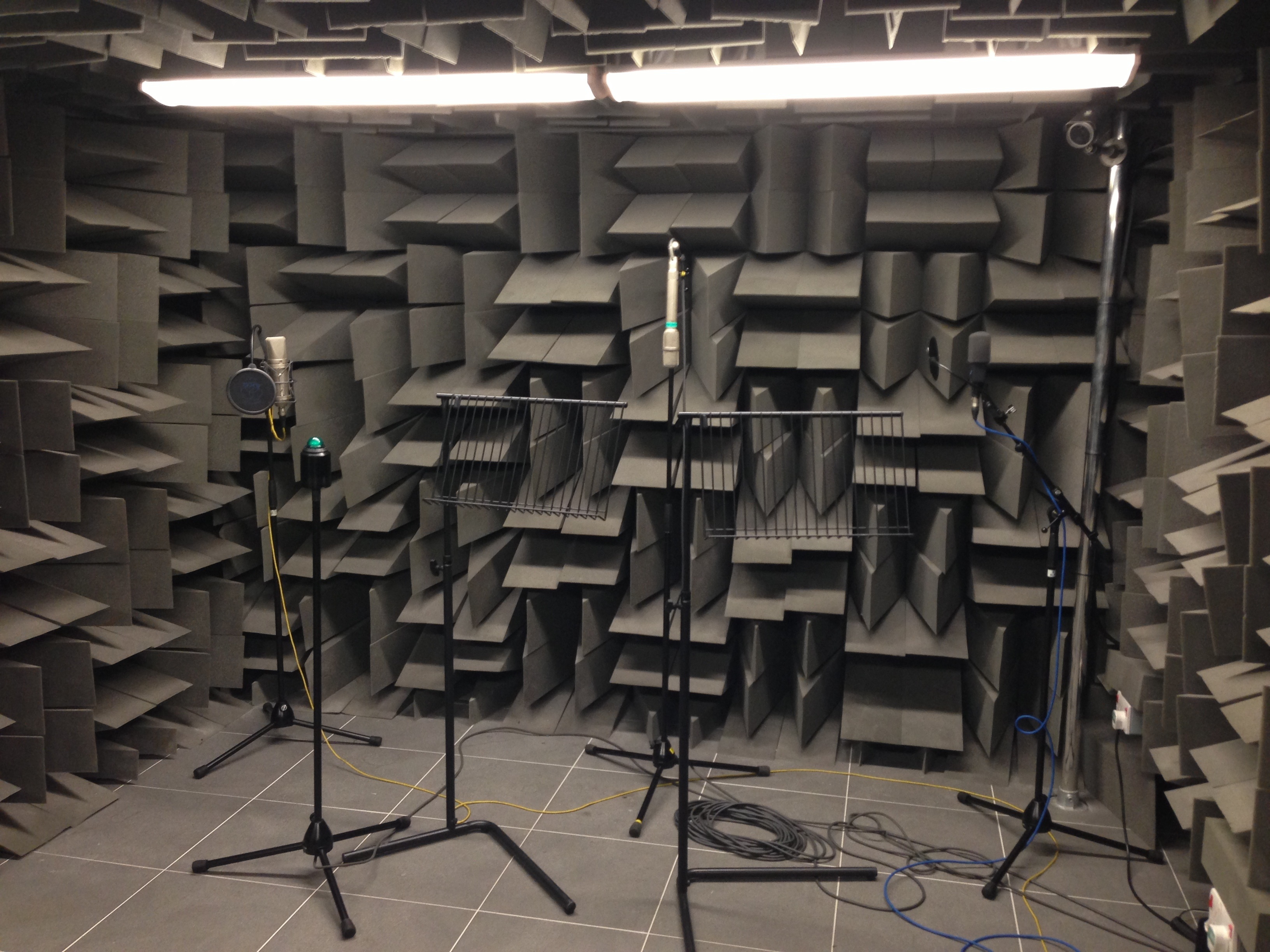 The microphone set up for some of the recording of Pinocchio.

This approach has the advantage that we could mix Pinocchio in 3D, placing sounds wherever we wanted (above, below, in-front behind etc.). For exmaple, there is a scene where Pinocchio was swallowed by a shark. Steve and I were able to position underwater sound effects, as audio objects, all around the listener, creating a highly immersive experience.

We were able to monitor the mix in our listening room, which was equiped with 26 loudspeakers. This set up has more loudspeakers than are likely to be available to the average listener so we used a rendering system created by IOSONO to create the stereo mix, which was broadcast on Saturday, a 5.1 mix and the 24.2 mix that the production team used to monitor the mix during post-production. So although you can't yet hear a full 3D surround version of Pinocchio, you can download a (AC3 or MPEG surround) 5.1 version to hear it in surround sound. Instructions for how to do so are given here.

This is still very experimental and we'd love to see your feedback in the blog comments below.