Sibyl, our privacy preserving recommender prototype has been running for a few months during which we've received a variety of comments from users. In response to this feedback we've updated Sibyl with a simplified user interface and an improved recommender model. 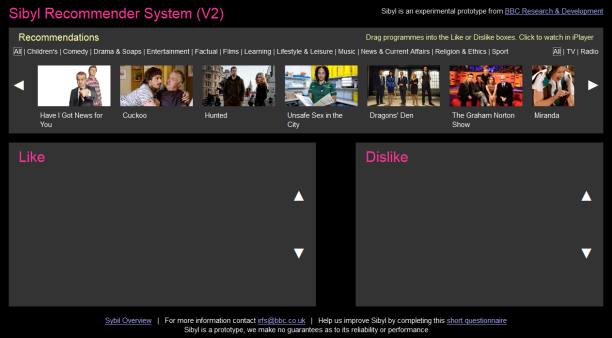 The first version used a metadata-based KNN model. This recommended programmes using programme-to-programme similarity which was determined by comparing programme attributes such as genre and format. Feedback suggested that many users found the recommendations lacked variety which is perhaps not surprising for a purely metadata-based approach. We've therefore updated the model by introducing collaborative filtering.

In the collaborative filtering approach the programme-to-programme similarity is determined by counting the number of common viewers for each pair of programmes. In effect, the approach can be described as "people who watched this programme also watched..." and tends to result in a wider variety of recommendations. Sometimes the results can appear eerily prescient whilst at other times it can be predictably populist. We've therefore adopted a hybrid approach by combining the metadata and collaborative filtering models and will be experimenting to find the optimum balance between the two.

Try the updated Sibyl Recommender and let us know what you think about the update by completing a short questionnaire.

The original metadata-based version is still available for comparison purposes.