The Olympics in Super Hi-Vision 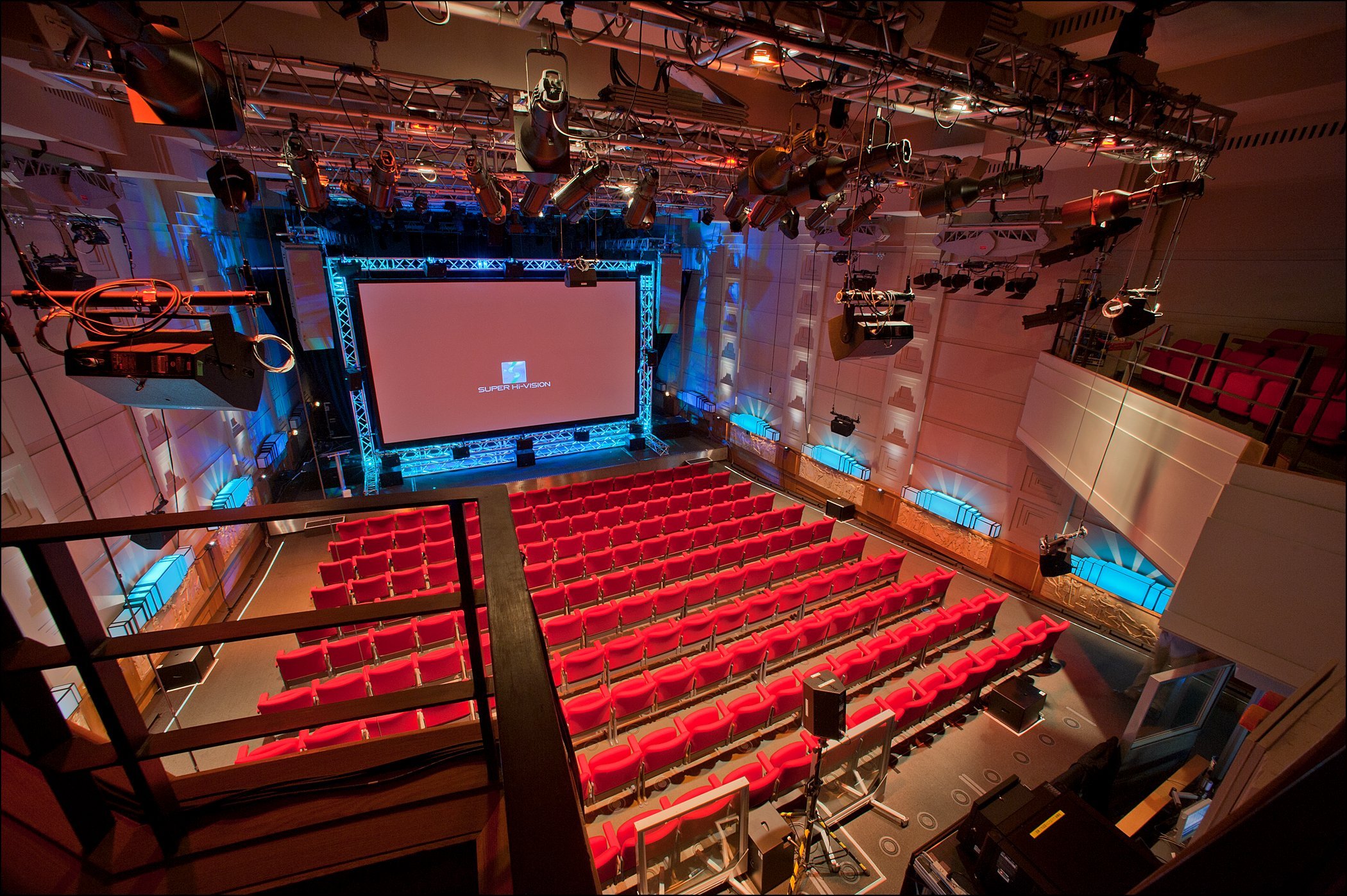 I sat with a crowd of people watching the Olympic Opening Ceremony last Friday evening. They were having a very good time, clapping and cheering throughout the evening. We all had the best seats in the stadium, but we weren’t in the Olympic Stadium, we were four miles away in BBC Broadcasting House. Other groups of people were in Bradford, Glasgow USA and Japan.  Why the fuss? TV has been doing this for many years. The reason is that we were viewing using an Ultra-HD system called Super Hi-Vision (SHV) developed by NHK (The Japanese national broadcaster). SHV has sixteen times as many pixels as HDTV making a picture with 7680 pixels across by 4320 pixels down. It was displayed on an 8-metre wide screen, accompanied by a 22.2 multichannel 3-dimensional sound system. The combined effect was to transport the people in the viewing theatre right into the stadium – telepresence comes of age.

BBC R&D has been collaborating with NHK Science and Technical Research Labs on SHV for four years. NHK themselves have been developing the system since the mid 1990’s. Their aim was to produce a TV system where the resolution exceeds that of the eye and where the screen is big enough to fill your field of view – the ultimate TV system!

NHK have used SHV at several events in the past, but the London 2012 Olympics is the biggest operation so far. NHK have brought over to the UK almost every piece of SHV production equipment that exists together with projectors and sound systems to equip three SHV theatres: one in BBC Scotland’s Pacific Quay studios in Glasgow, a second in the National Media Museum in Bradford and the third in BBC Broadcasting House, London. There are also two public theatres in Japan and a private theatre in Washington DC, USA. BBC Sport and BBC R&D are working with NHK on the production of the content and its transmission to the theatres. 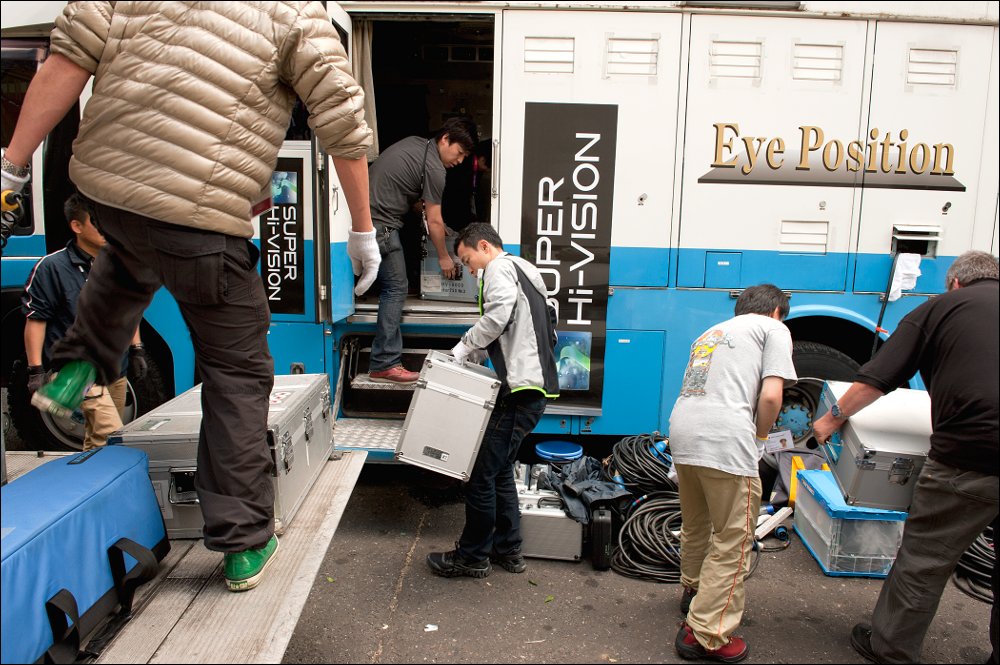 NHK Crew prepare their equipment for deployment at the Olympics

There are three SHV cameras (the only three operational SHV cameras in existence) in the Olympic Park. They are connected to NHK’s Outside Broadcast vehicle so that the pictures from the cameras can be selected to be sent to the SHV Production Centre at BBC Television Centre. The pictures can also be recorded in the vehicle. There is a separate sound vehicle (based on a converted refrigerated truck), supplied by SIS Live, kitted out with an audio mixing desk and a miniature 22.2 multichannel sound system provided by NHK. Audio from NHK’s own microphones and from the shared microphones in the Olympic Park are mixed in the audio truck into 22.2 channels and sent to the SHV Production Centre for further refinement in a room kitted out for audio editing. The connection from the Outside Broadcast vehicles to the SHV Production Centre is via an optical fibre link carrying the SHV uncompressed at 24 Gbit/s over eight wavelengths. For security, there is a backup fibre link taking a different route across London.

The SHV Production Centre inside Studio 0 consists of editing, storage, transmission and pre-view facilities. Editing is initially carried out on a downconverted HD proxy using an HD editing station. This generates an EDL (Edit Decision List) that can be use to drive either of the two SHV editing stations where the content package can be further refined: one SHV editor is for the UK/USA content package and the other for the Japanese content. The SHV content has 16 times the data of HDTV, so rendering and processing time is slow, even using very powerful workstations. Even so, the NHK production team and a BBC editor are able to edit a new content package overnight ready for showing the next day.  There is also a dedicated SHV graphic station used to add captions and make up titles sequences. 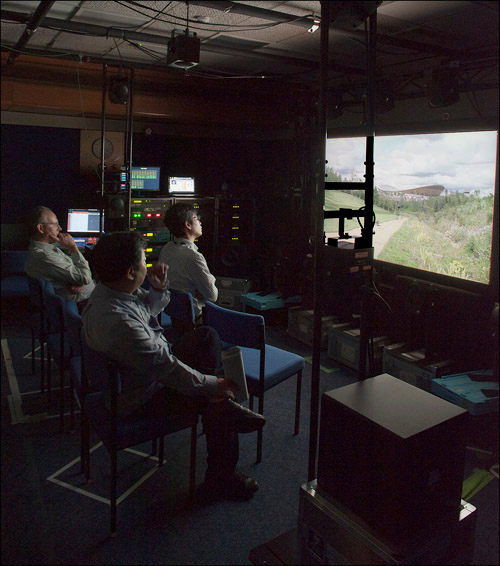 The sound is edited in the control gallery for Studio 0, which has been transformed into a 22.2-channel editing room. Walking into the room, one is impressed by the array of 24 speakers surrounding the audio mixer operator. The speakers are arranged three heights: floor, mid and ceiling heights, plus one speaker directly overhead. Skilled sound editing is needed to maintain a realistic feeling of telepresence in the short time available for editing.

The edited package is previewed in Studio 12 (the old Drum Room for Studio 0), which is equipped with its own 22.2-channel sound system and an 85-inch LCD display. There is only enough room for seven people to be seated, but the room gives a good impression of the immersive experience that SHV can produce in the home. Currently the display is one of a handful of prototypes; it shows stunning detail in the pictures even when standing right in front of it.

The edited package is transferred to two solid state recorder/players ready for transmission to the theatres: the second machine is for backup.  Each machine consists of sixteen P2 recorders, all working in parallel to achieve the required capacity for SHV.

The channel operation for transmission to the theatres is run jointly by NHK and the BBC with transmissions every hour during the day from 11:55am. The content from the playout machine is sent to a bank of audio and video encoders, with each audio channel encoded at 384 kbit/s using AAC and the video encoded in sections using H.264 encoders giving a total of 280 Mbit/s. The coded signals are transported on a pair of Transport Streams (TS) to a pair of TS/IP converters to produce a pair of IP (Internet Protocol) data streams for each theatre at about 350 Mbit/s in total. Two data streams are produced because the total bit rate is too high to be carried on one Transport Stream.  Unicast UDP (User Datagram Protocol) is used to transmit the data to the theatre in the UK and USA with some Forward Error Protection (FEC to guard against minor data packet loss. In Japan, Multicast is used with the option of extra FEC.

The transmissions to Glasgow and Bradford are carried to the theatres over Janet (Joint Academic Network), with the final link to the BBC studios in Glasgow over a link provided by BT. Geant2, Internet2, Sinet4, and GEMnet2 research networks coordinated by NTT are used for the links to the USA and Japan.

At the theatres, the signal is decoded and displayed on 250-inch or 300-inch screens using projectors with 8k resolution and the audio sent to the 22.2-channel audio system. Setting up these theatres took several days. Special attention was needed to set up the audio system. Care was needed to ensure that the channel order was correct, then the relative levels and delays needed to be set. Fine adjustments were required to the speaker positions and angles to ensure the best sound reproduction. 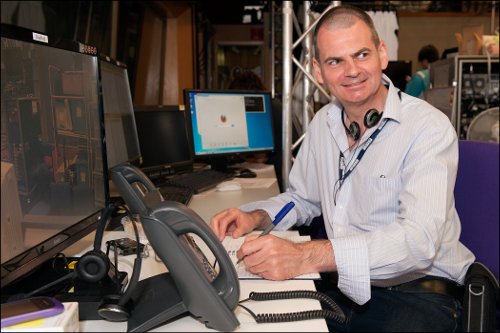 Andy O'Dwyer of BBC R&D at the control centre in TC Zero, where Stagebox video links connect all the display venues with the OB at the Olympics and the Television Centre.

This has been a project long in its preparation, with first test transmissions of a live pop gig by the Charlatans from London to Tokyo in September 2010. Network tests across the UK and from the UK to Japan started in winter 2011/12. The network link to the National Media Museum had to be upgraded from 100 Mbit/s to 1Gbit/s. In Glasgow, BT provided a link from Glasgow University. Soak testing of the link has been going on for several months, during which several problems were found and solved. As I finish writing this post, we are into the fourth day of the Olympics. The links have been reliable, with only one glitch that has occurred during a show in the UK so far. Even so, we are investigating why there was a glitch. We have shown that IP networks can be made to reliably carry high bit rate time critical video and audio, but care is need in the way the links are set up. It is not clear to me that all the interaction mechanisms on IP networks are well-understood; an area for further research, perhaps.

Places remain available for some of the public viewing sessions at Broadcasting House and Pacific Quay and can be booked at the BBC Events site.