Audio on the Web - Rediscovering the era of the Radiophonic Workshop

For the past two years, our team has been involved in the W3C audio activity, participating in an effort to bring open, standard technology to process and synthesise audio on the web.

With recent progress on draft specifications and early implementations, we felt it was time to start playing with the emerging APIs. There were already many demos showing what can be done with the now-defunct Audio Data API as well as the proposed MediaStream Processing API and Web Audio API, yet we felt there was room for us to build something which would not only help show the capabilities of these APIs, but could also feed into the standardisation work by revealing gaps in features, by gathering impressions of working on some less-used sections of the specs, and perhaps even by stretching the implementations enough to raise flags about performance. 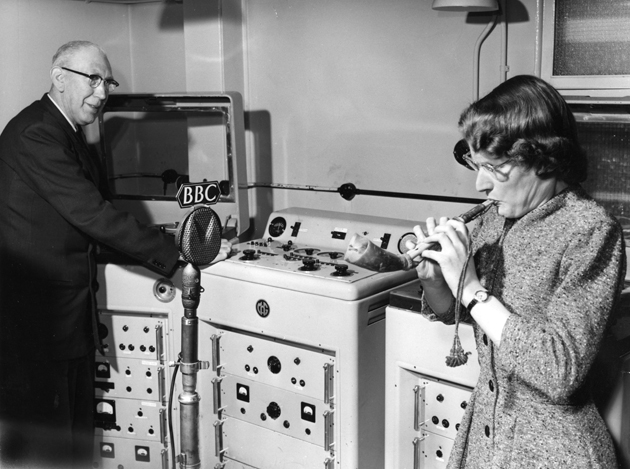 What, then, should we build?

We knew we wanted our work to link the BBC's long history of audio (90 years this year) and what we think is its future - on the web. We also knew there were many things the BBC might want to build with a working web audio processing technology. Wouldn't it be great if people could create their favourite binaural mix on the fly rather than having to listen to several pre-processed mixes? Wouldn't it be fun if everyone could create their own Radio1 MiniMix, directly in their browser?

Unfortunately, the time was not ripe to build those just yet - being early in the innovation and standardisation process means that our raw materials are specifications which are bound to change, and implementations ill-distributed across browsers and platforms. Not the greatest recipe for a public service the BBC would want to promote to its wide audience and support in the future.

A new frontier for audio innovation

This is a new frontier. And it reminded us of one of our favourite bits of BBC history: the emergence of Radiophonics at the BBC, half a century ago. 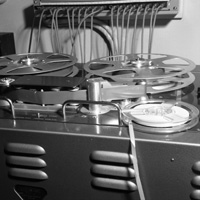 The Radiophonic Workshop was born in a wild west of new sounds and technology, where engineers and musicians worked together in a rapidly blurring symbiosis. At first the roles were fairly clear: engineers creating and handling machines, and composers using those machines to create new soundscapes. A few years later, as technology evolved and new hardware such as synthesisers appeared, there were only people creatively playing with music technology.

Fast forward to today: such things are no longer the sole prerogative of a unique workshop, a professional studios with specialised equipment or even amateurs with the means to buy advanced software: if we succeed in our work, anyone with a web browser, a text editor and an idea will be able to create new sounds, new connected audio experiences.

As we dived into whatever material we could find about the history of radiophonics and the now cult-worthy BBC workshop, including the excellent 2003 documentary Alchemists of Sound, we realised how timely our idea of using it as a link between the past and the future was: the science museum was running an exciting exhibition on the early days of electronica and the weird and wonderful machines which pioneers such as Daphne Oram had then devised. And half-way through our 8-weeks project, we learned that a new incarnation of the Radiophonic Workshop may be brought to life as part of the Space cultural initiative.

After a visit to the science museum, dynamic trio Chris Lowis, Matt Paradis and Pete Warren began their detective work to find interesting material about the radiophonic workshop. We had all seen the excellent documentary "Alchemists of Sound" and made note of the equipment and processes shown in it, but our first exciting trove was a BBC Engineering Division Monograph from November 1963: Radiophonics in the BBC. The monograph not only gave a list of all the equipment used in the two workshops at the time, it also included diagrams of several systems, as well as a number of anecdotes. 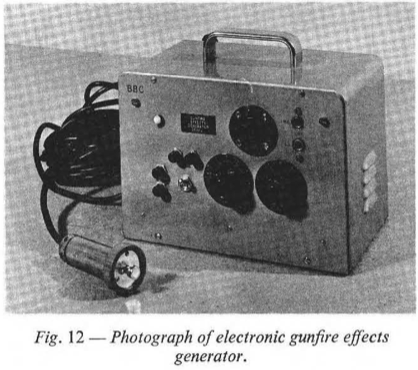 One of our favourite goes:

Prior to 1954, gunshot effects in drama were made either by the actual firing of a gun in front of a microphone or by slapping a ruler on to a table. The former, whilst being a pretty obvious method, was more difficult in practice than it seemed. The noise produced by a stage-pistol, firing blanks, does not sound at all convincing when picked up by normal means in a studio. Because of their comparatively loud peak energy, they had to be used a long way from the microphone and they sounded unreal. Then occasionally they 'misfired' (disastrous in a tense situation), they scared the performers, and they required a special license and safe keeping to comply with Home Office regulations.

Thus was born 'an electronic gunfire effects generator', which the monograph then describes, including even a block diagram and a photograph of the unit - quite the perfect material to base a demonstration of the Web Audio API (which itself works by connecting a graph of processing and synthesis nodes together).

The mystery of the workshop journals

The Wikipedia article on the workshop also brought an ounce of mystery to our investigation. It mentioned a series of journals documenting the hardware and processes of the workshop, which would be a fabulous trove for any radiophonics enthusiast, and would be an incredible help in our effort to reproduce some of that equipment on the web:

The Workshop regularly released technical journals of their findings - leading to some of their techniques being borrowed by sixties producers and engineers such as Eddie Kramer.

We looked everywhere we could for the mythical journals, even enlisting the help of our R&D librarian Louise Martin, to no avail. Louise helped us find plenty of material such as articles and books on the workshop, but the journals were nowhere to be found. It eventually took a conversation with radiophonic workshop veteran Dick Mills to dispel our dreams of poring through a pile of workshop journals: the workshop team did not publish its own journals, but had, through the years, contributed a number of articles to magazines such as Practical Electronics, Studio Sound and the Dr. Who Magazine

So much for the hidden treasure. In our quest for it, however, we had accumulated knowledge about several pieces of equipments, which we began recreating with web standards.

In the next post in this series, we will be looking at how we recreated some of the cult radiophonic equipment on the web, porting old-school knobs and switches to the screen and contributing to emerging web standards in the process.