'TV-Controlled Daleks' - not coming to a living room near you any time soon...

We were somewhat surprised this morning to see blanket media coverage suggesting that we're building toy Daleks that come to life whenever Doctor Who is on TV; We're sorry to break the news to the Doctor Who fans out there that sadly, this isn't going to be happening any time soon. 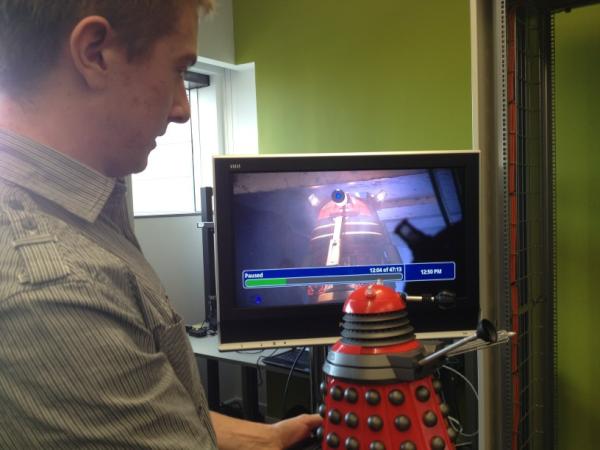 Most of our work here at BBC R&D is behind the scenes, and benefits the licence-fee payer in ways they may not even be aware of. Nicam Stereo and the technology that enabled Freeview HD are perfect examples of this. Occasionally though, one of our ideas really catches people's imaginations, and spreads far beyond the department or the BBC.

That's what happened after we showed our "synchronised Dalek" demo at an open day for the new R&D Lab at MediaCityUK last week.

In short, the technology we've developed allows a network-connected device, whether that's a smartphone, a laptop or a modified toy Dalek, to talk via the home network to a set-top box that is running our software. By doing so they can obtain the information necessary to synchronise things to it, be they images, audio or motion. We call the API that our software implements, "Universal Control". In this post, we'd like to share a bit more about the demo and how it came about; what we learned from it, and how we're using it to inspire programme makers and get them thinking about the future.

We've posted here previously about the technology we've developed that could revolutionise remote control - with particular benefits for users with accessibility requirements, and this was the primary reason for us developing the Dalek prototype: a short project to bring the technology to life in a playful way.

Over the last couple of years, we've developed a number of prototypes that use this technology, such as "single-switch" remote control interfaces for users with severe mobility impairments, and speech-based remote controls for the blind and visually impaired.

Conversations and collaborative work with disability rights groups, assistive technology manufacturers and television platform operators have convinced us that this approach to accessibility would deliver significant benefits to users with these requirements in a way that doesn't impose unaffordable costs on set-top box and television manufacturers.

At the same time, we have been mindful of the potential that a communication standard like Universal Control has for enabling "dual screen" experiences that go beyond what can be achieved with today's technology.

When University of Manchester graduate Andrew Bonney joined our team for six months of his one-year Industrial Trainee placement, we asked him to explore two research questions for us:

We set him the challenge of producing a demonstration that would answer these questions, and this video of "our TV-controlled Dalek" shows what he came up with:

Andrew's deft modification of an off-the-shelf Dalek toy achieved everything we wanted from the project. We gained valuable insights into the challenges of developing Universal Control clients for an embedded platform with just 32kB of RAM, while demonstrating their feasibility in a very striking way. It's also an entirely new take on the concept of "dual screen", demonstrating that the things you can synchronise to a TV programme go way beyond smartphone and tablet applications.

Developing toys is not part of BBC R&D's remit, but the Dalek helps us with a part of our mission that is far more important: helping BBC programme makers understand how changes in technology could affect their work. As computing power continues to become cheaper and as more and more devices gain wireless connections to each other and to the Internet, we expect to see an increasing number of everyday things gaining these capabilities.

Toys are a particularly interesting example of this. When toys can interact with and respond to television programmes, it becomes no exaggeration to say that programme makers can take advantage of actors that are right there in the living room with the viewer. While Daleks that take part in an episode of Doctor Who are a particularly eye-catching example of this, there are many other ways that broadcasters could take advantage of these advances in technology. We see some very real educational possibilities - particularly for our youngest viewers.

Of course, this is the world of R&D. Today's televisions and set-top boxes don't support the Universal Control API, or anything like it, so you won't see WiFi-enabled Daleks taking over your living room this Christmas. But we firmly believe that the experiments broadcasters are currently performing with Dual Screen experiences are just the tip of the iceberg, and that tomorrow's television programmes won't always be confined to a screen in the corner of the living room.

The skills Andrew demonstrated in the development of this prototype were equally apparent in last year's interviews for our Trainee Technologist scheme, and he has now joined us full-time. Applications are currently open for this year's scheme.