Here's a short post about a 3D sound experiment that BBC R&D's audio team conducted the other week in collaboration with BBC Radio 2.

As part of the BBC Audio Research Partnership, that was launched earlier in the summer, we are looking at potential next generation audio formats. You may have read some of our work into ambisonics here and there. If you want some more detailed information about what we’ve done, you can read this paper of ours, which is available from the AES. I think the headline from the paper was that first-order ambisonics is not as good as traditional channel-based audio, like 5.1 surround, for (what can be considered) point sources, but it does work very well for reverberation and diffuse sounds. With this in mind we spotted an opportunity to conduct an experiment using a hybrid of ambisonics and normal channel based audio.

Elbow, the Manchester band, were planning a homecoming gig in Manchester Cathedral. After an email to the right person it was agreed that the team could try some experimental recording. We thought this would provide an excellent opportunity to learn about capturing a full sound scene using a combination of ambisonics and close microphone techniques. It would also allow us to improve our understanding of challenges and compromises faced when integrating 3D audio capture and mixing and into real-world live production environment. While we suspected that the acoustic of the cathedral would sound great when captured using ambisonics, we didn't really want to capture the on-stage and PA sound with the ambisonics microphone and it was a rather loud sound reinforcement system. We've recorded the BBC Philharmonic in ambisonics a few times before but have never had to contend with a loud PA. Thankfully, there are tricks you can perform with ambisonics, such as attenuating the sound from the direction of the left and right speakers of the PA. Plus, Elbow were kind enough to put their drummer in a plastic box, so the direct sound of the drums (the loudest instrument on stage) would be attenuated too. 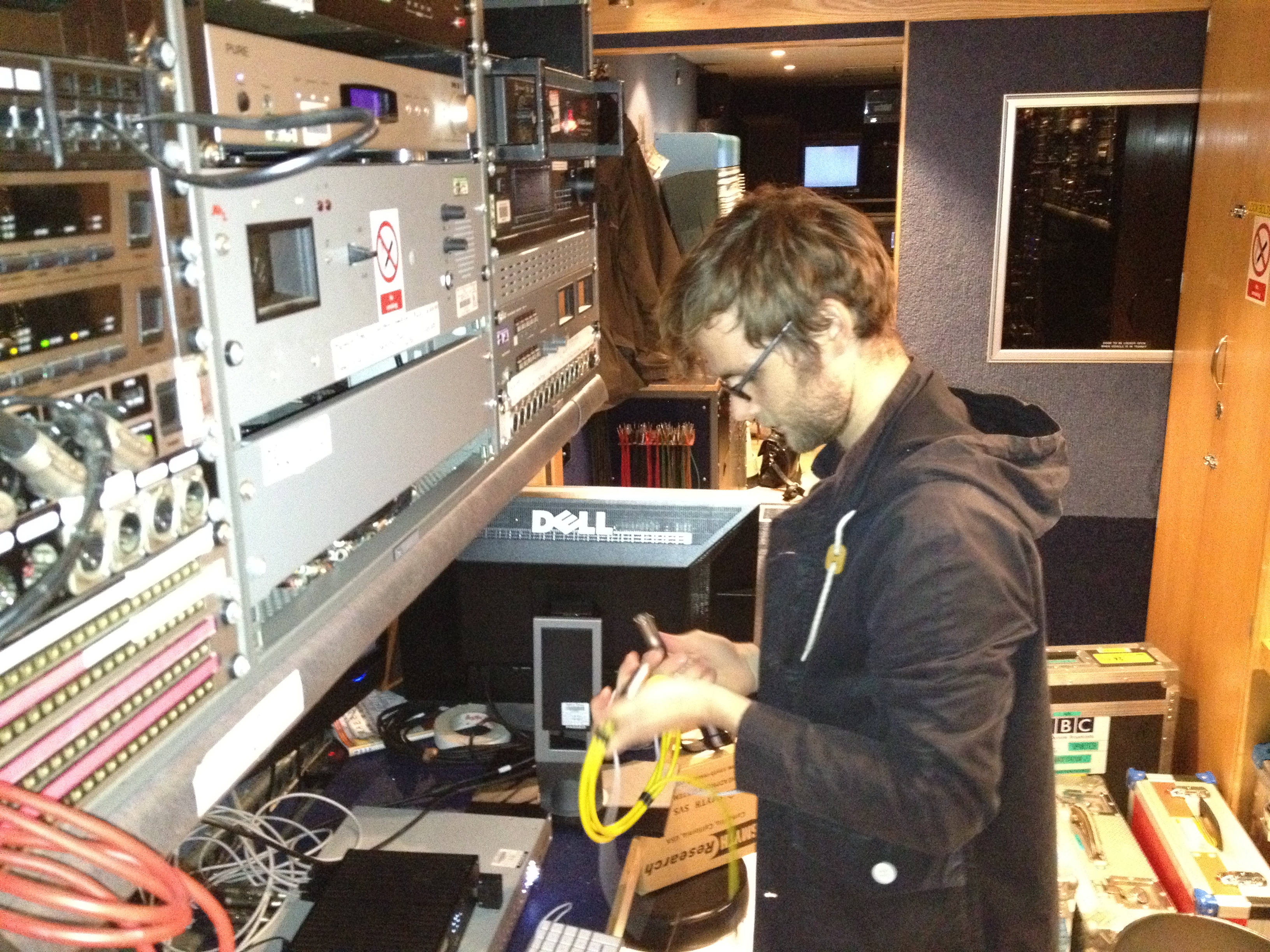 Chris Pike, setting up the recording equipment in the back of the outside broadcast truck

Due the nature of the cathedral's structure we couldn't get the ideal ambisonic microphone position by slinging it from above. A couple of years ago we recorded the Last Night of the Proms in ambisonics and were able to position the microphone right in the centre of the hall, above and behind the conductor. However, we had to compromise for this event by placing the microphone slightly to stage left of the front of house mixing desk. This worked quite well because it was far enough back from the PA speakers that from most directions it was just capturing reflections from the walls and ceiling of the cathedral. This also helped us to attenuate the PA sound mentioned earlier. The microphone was also raised above the audience by a few metres; while we wanted to hear the audience singing and clapping, we didn't want to hear specific members of the audience chatting. 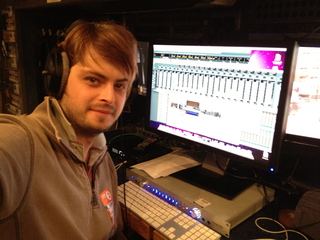 Tony Churnside, pleased to have everything up and running before the band begin to play.

We could have just recorded the microphone signals without worrying too much about how it sounded, but we thought that it would be nice to at least try to monitor the 3D recording. The space inside one of Radio 2's outside broadcast trucks is very limited with nowhere near enough space for the 16 speaker set up we have in our listening room. To get around this we decided to use a technology called binaural reproduction using a system developed by Smyth Research called a Realiser. This box allows you to simulate surround sound over headphones. It's fairly complicated to set up, but it does a pretty good job of making it sound like you're in your multi-speaker listening room, when you're actually listening over headphones. Normally the Realiser is used to monitor 5.1 surround sound, but we calibrated the system with a cube of 8 speakers to allow us to monitor sound in 3D. It even has a head tracker to keep sounds horizontally stationary relative to small lateral movements of your head. 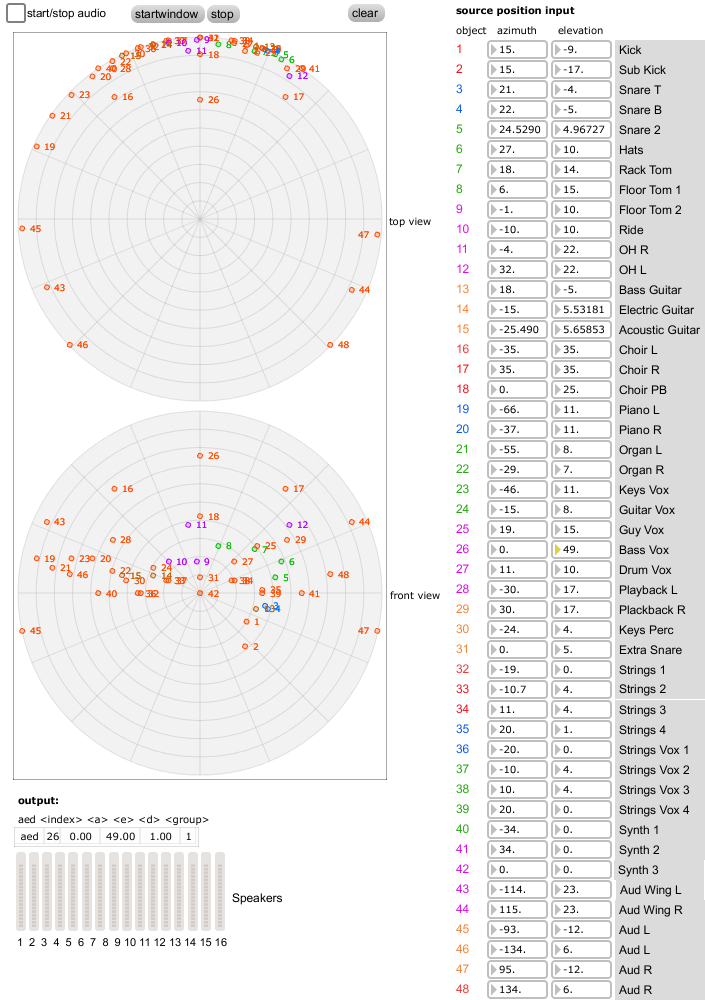 Along with the ambisonics microphone signals we recorded all the individual sources (about 50 of them) to allow us to remix the recording in our listening room. We have developed our own spatial audio 3D panner that allows us to position each of the sources anywhere in the 3D soundscape and over the next month or so we will experiment with a number of different spatial mixes of the recording to assess which is generally preferred.

We learnt (and are still learning) a lot from this experiment and will be publishing results and analysis over the coming months. In the mean time here's a link to the Radio 2 show where you can watch some clips of Elbow's performance.

We would like to thank Rupert Brun, Sarah Gaston, Paul Young, Mike Walter, Mark Ward and all at Radio 2 for making this experiment possible.