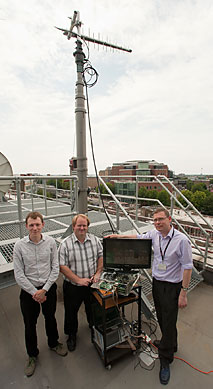 Andrew Murphy, Justin Mitchell and Martin Thorp (from left to right) with the transmit antenna above them

Editor's note: DVB-T2, the technology standard that enabled High Definition on Freeview now has a new profile which has been provisionally called T2-Lite. This new profile will allow simpler receiver implementations for very low capacity applications such as mobile broadcasting. This new profile can be mixed with conventional T2 signals in a single multiplex, to allow separate optimisation of the individual components.The T2-Lite component could provide audiences with a reliable live 'broadcast' TV or radio experience on their handheld devices. Using this new profile live broadcasts can be delivered to multiple audience members at a fixed cost to the content provider. Justin Mitchell Lead Engineer at BBC R&D explains the technical know-how behind it - KG

On 7 July 2011 we began transmissions of DVB-T2-Lite from the roof of BBC R&D’s South Lab opposite TV Centre in West London. As DVB-T2 is widespread throughout the UK, you might wonder what’s unusual about this? Well, the DVB-T2 specification has just been updated with a new profile which we are evaluating. This marks the start of a thorough technical evaluation by us in BBC R&D and is especially exciting because the specification that defines the format of the signals to be transmitted has only just been approved as standard by the DVB Steering board! Just as with the existing profile - which went on to become 'Freeview HD' in the UK - we are pleased to be there from day one with transmitter (modulator) and receiver (demodulator) designs that we can use to validate the standard and also to licence to manufacturers interested in developing products for mobile applications.

The new T2-Lite profile is designed to make use of the same reliable features we are familiar with from DVB-T2, but by a careful selection of a sub-set of modes, allows for receivers to be implemented using much smaller and more efficient silicon chips. So T2‑Lite will efficiently deliver TV and radio to mobile devices such as phones and tablets (for which power consumption is an important issue) and in-car at the same time as providing services to existing fixed receivers. It's obviously early days but we are interested to find out how this new technology may play a part in delivering BBC content (and maybe one day content from other broadcasters)  to an ever-growing 'mobile audience'. 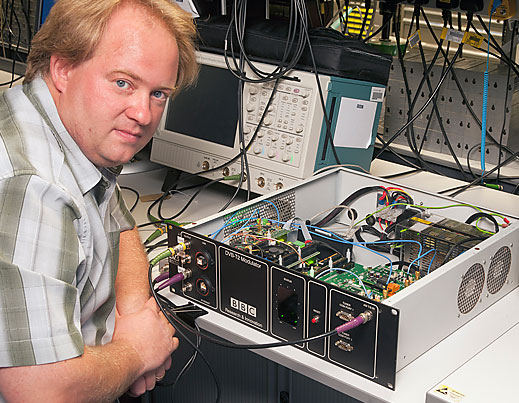 Justin Mitchell with the prototype modulator.

This new profile is defined in version 1.3.1 of the DVB-T2 specification. It was designed so that only minimal changes were needed from an existing DVB-T2 modulator and demodulator to be able to support the new profile, which will encourage its adoption by equipment manufacturers.

In the existing DVB-T2 spec, different services can already been sent with different levels of robustness so that some services might be targeted at roof-top reception (e.g. HD) while others targeted at portable or mobile receivers.  However, in the UK, we have chosen a mode (using 32K carriers) which maximises the data rate for HDTV for stationary receivers.  The close spacing of the carriers in this mode means that the signal cannot be received reliably by mobile receivers.

In the existing DVB-T2 spec, the signal can, if required contain periods of time which can be used to transmit something other than DVB-T2. This feature was included in the spec to future proof it against changes and allows improvements in modulation technology to be incorporated into the system. These periods of time are called future extension frames (FEFs).

However, in the new version of the spec, both the main part and the FEF contain valid DVB-T2 but with different modes (in terms of number of carriers) and varied levels of robustness, allowing both services to mobiles and fixed receivers to be transmitted as part of the same transmission on the same frequency. The system also permits the transmission of a service to mobile devices without a second DVB-T2 service being there. 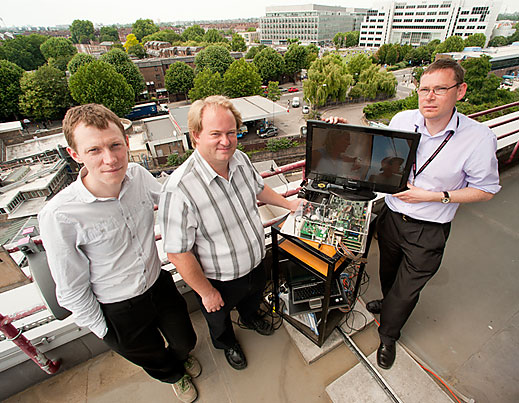 Andrew Murphy, Justin Mitchell and Martin Thorp (from left to right) with the prototype T2-Lite receiver.

The new profile allows most of the flexibility of the DVB-T2 spec, but to maximise its effectiveness for mobile and minimise the requirements for the receiver, it has the following differences:

As part of the digital switch-over programme, the UK has already rolled out a nationwide DVB-T2 multiplex which provides several HD terrestrial channels. For this technical trial of T2‑Lite, we’ve combined an HD multiplex intended for reception on fixed receivers with a more robust mobile service which could be television, radio or data or any combination of these. In the UK, we currently use the mode 32K 1/128 256-QAM 2/3 which gives a bitrate of 40.21 Mbit/sec in an 8 MHz multiplex. In our technical trial, we’ve used the same mode for the HD part of the multiplex but have added a Future Extension Frame (FEF) containing the mobile service. The HD part of the multiplex consists of a DVB-T2 frame which is 216.9 ms in duration followed by a FEF of 44.6 ms. This FEF contains the mobile service.

The screenshot of the oscilloscope shows how the FEFs combine. The yellow signal represents the HD signal and the blue trace represents the mobile signal. 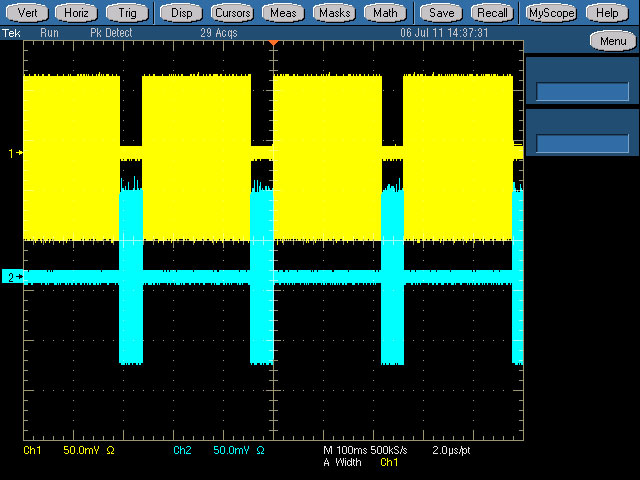 An oscilloscope plot showing how the HD (top trace, in yellow) and mobile (bottom, in blue) services slot together; each sits exactly in the gap left in the other service and are combined inside the modulator to create a single signal.

My project team (Martin Thorp, Andrew Murphy, Chris Clarke, John Elliott, Tom Ellinor, Nicholas Jayaratnam, Karen Kingston-Lee, and Colin Howes) and I, are thrilled to have been able to begin transmission and reception of T2-Lite the day that the specification was approved by DVB as we were chomping at the bit to get it all going,

We are planning to demonstrate this technology at IBC in Amsterdam in September on the DVB stand (1.D81) so if you are going to be there come and visit us. We will have a live over-the-air demonstration of both the transmitter and receiver and will be more than happy to have a chat about how it’s all been going.