BBC Scotland Prototype Programme- Round one Round up

On Friday 18th February the first of two development sessions run by the Prototype project rounded off in style with a series of presentations at Pacific Quay in . For the previous two weeks students from Abertay University had been working alongside BBC producers, programmers and designers building prototypes (the clue's in the name) of possible future BBC services. On Friday they presented their ideas back to an audience of BBC and Abertay staff including representatives from Entertainment, R&D, TV Platforms and Strategy.

The presentations were very well received despite a couple of technical hitches (never work with animals, children or live technical demos) and covered a diverse range of platforms including red button, public big screens, IPTV and archive. The individual projects explored ideas around collaborative and competitive play for both children and adults; the potential of motion and sound control when used with large crowds; how to move web content away from the PC screen using Augmented Reality and new architecture and visualisation methods for vast stores of complex data. We've already had interest in each of the prototypes from BBC divisions including Entertainment, Children's, TV Platforms and R&D.

Prototype is about first iteration products that prove concepts rather than presenting finished pieces of work. That the students were able to generate such a favourable response from BBC staff used to seeing very high quality output is testament to the quality of work on show. This in turn would not have been possible without the tremendous amount of work they put in. 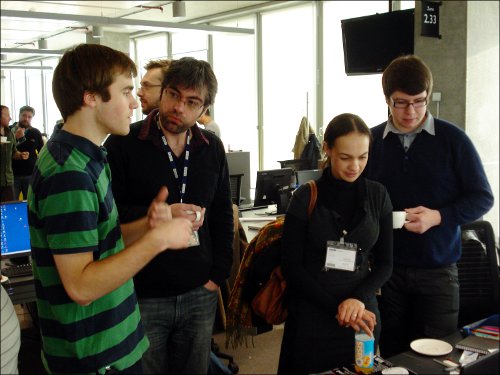 The Students take BBC and Abertay staff through their projects
Simon Lumb of TV Platforms in Manchester is currently looking at re-using the development processes used on Prototype. He's aiming to run sessions drawing on students from HEIs in the North of England. Additionally, we want to explore how we turn the rapid prototyping methods we've been using into internal BBC processes that can help production teams generate and iterate content ideas. We'll keep you informed on how this all pans out. 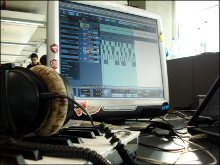 Our focus for the next few weeks will be documenting the work that was done and getting sorted for the next session which starts on 15th March. We'll also be looking on how the current projects move forwards from here to a stage where they can be pitched internally for further investment.

Prototype is run by BBC Scotland New Media and sponsored by Vision so we'll be working alongside each other to make sure the ideas the students helped shape are deployed across brands and platforms that suit them best. Each of the projects was designed as a potentially re-skinnable piece of technology so the resulting products are designed to live in multiple spaces within the BBC's output. This was a consideration from the off - anything built under the Prototype banner should represent excellent value for money for the BBC.

The level of effort the students put into the project cannot be overstated. They were frequently in the office until the wee hours and it shows in the solidity of the work they produced. Each and every one of them hugely impressed the BBC staff members they came into contact with. We're committed to keeping them involved in the further development of the prototypes they devoted so much of their time to and we're currently working with Abertay to formalise this arrangement.