If you think media archaeology is new - think again! Glasgow's 1930s answer to Time Team was Ludovic Maclellan Mann, an archaeologist who loved to get his work in the papers - the Daily Record and Glasgow Herald were favourites.

Many of the stories begin with the line 'Ludovic Mann, the eminent archaeologist', ..., and go on to describe features that have been rescued from destruction. George Applebey recalled that Mann's technique was to dispatch a lad with a letter to the editor of a newspaper with instructions to wait until its publication was confirmed; if it was not to be in the next edition the copy was to be taken to another editor.

An accountant and insurance broker by background, he wasn't exactly qualified in archaeology, but didn't let that stop him. Among his triumphs was claiming to have discovered an entire druidic temple which he mocked up to the delight of the public and then he bought the land and left it to Glasgow council in his will.

He was also terribly keen on cup and ring marks - the beautiful rock markings left by nomadic pre-bronze age people - seemingly as markers for special places. "They are usually found on high ground offering viewpoints over valleys and plains. The stones face out towards the open sky." 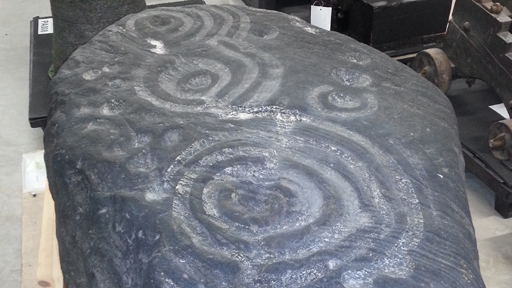 Thinking about the very beautiful boulder called the Langside Stone in Glasgow museums gave Mann one of his great ideas. He decided the markings were early records of eclipses - and that they worked on the same principles as the Mayan calendar and could help explain it!

According to Mann "The cupped stones are registers made by prehistoric astronomers who reckoned time by hours, days, years, and long cycles of years. The happening of eclipses punctuated their cycles. ". He thought you could read the markings like clock faces and marks on them as clock-hands

"Each long cycle checks the reading given by the others. They involve the periodicities of sun, moon, nodes, and five planets. The Langside and Cleuch stones commemorate chiefly--one and the same event--an eclipse of the sun seen in the Glasgow district in the year 2983 B.C., at three o'clock in the afternoon of the sixth day after the spring equinox (March 27 in our reckoning)."

"The wheel calendars of the old Central American Maya are but contorted survivals of the old prehistoric time-dials."

All this was duly printed in the Herald!

If he had been right ,it would have been a big first for Glasgow, because the oldest verifiable recorded eclipse in human history is supposed to have been noted on a clay tablet in what's now Syria in 1223 BC - though there are Chinese legends about older ones. He decided his most famous site at Knappers near Drumchapel commemorated the same eclipse and that it was the Westminster Abbey of Scottish Druids. It became an immediate tourist hit, as he mocked up his eclipse theory of serpents swallowing the sun in technicolour detail - 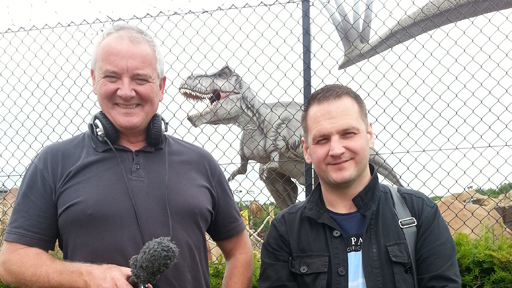 "Brightly coloured stobs in red, blue, yellow, orange, green, black and white delineate the Serpent attacking the Sun and the planets rushing in to save it from extinction. "

The papers lapped it up - but in reality he'd found something much less exciting. Modern archaeologists think it was perhaps the remains of a highly truncated burial mound or possibly a badly eroded henge monument. But you're still in for quite a surprise if you go there - nowadays the site is the car park for a crazy golf course resplendent with animatronic bellowing dinosaurs! Mark Stephen went there with Glasgow historian Stephen Mullen and producer Louise Yeoman.