Gran was like Robinson Crusoe; a solitary survivor, an unkempt outsider, a one-off. For a start, Gran was a man.

It didn't seem strange. We were used to saying 'Gran needs more baccy for his pipe' or 'Gran's having a shave'.

Instead of a tropical island, Gran had washed up in the old dairy where his wife used to make cheese.

By the 1970s the cheese shelves were packed with the flotsam and jetsam of his farming life: decoy ducks, old milk bottles, rolls of wire. Pushed up against them was his arm- chair, ingrained with grime and packed with newspapers where the springs used to be. He had a black and white television, a huge wireless and a stack of westerns from the mobile library.

Bit by bit the dairy filled up with broken furniture that my mother wouldn't have in the house: legless chairs, chairless dining tables, over-wound clocks and a wooden fire-surround. 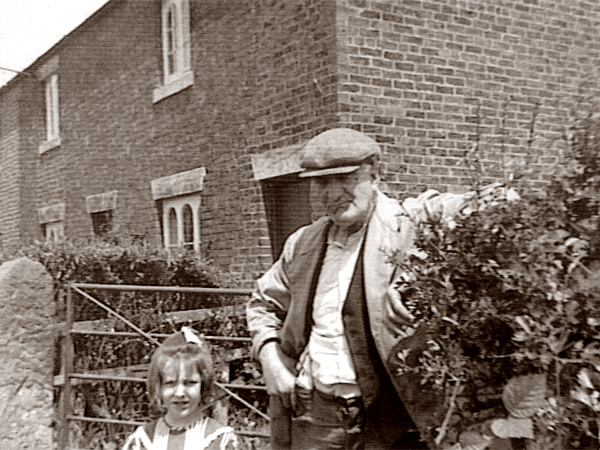 A two-bar electric fire kept him warm along with a pig lamp dangling from the ceiling and shining on his white hair. The farm cats slept around his shoulders, sharing his lamp. When one of the cats died on a sofa in there, another cat flattened the body and turned it into a bed before anyone noticed.

At mealtimes Gran came into the farmhouse to eat, shuffling in his slippers across the yard to see what was on offer. If it had a crust or a hard skin he'd go back for his false teeth. He ate all his meals off a single plate, wiping it clean between courses with a slice of bread and butter. He ate everything: fat, gristle, the lot. If we grimaced he'd say 'you lot, you don't know you're born'.

He was a veteran of the trenches at Ypres where he was shot through the shoulder. In hospital in Boulogne he learned to thank the nurses - mercy boo coo.

As an old man his war was with moles. He carried a pen knife for shredding baccy, paring his nails and setting his mole traps. He walked the farm vigilant for signs of invasion; constantly on the look out for soil explosions where the moles had broken cover from their underground trenches. Then he'd set the sturdy metal trap with the ferocious grip. When he caught one he'd leave it dead in the field to be scavenged by the crows and the foxes.

One day a mole crossed the farmyard and plunged into his seedling tray.
'Gran! Your lettuces are moving.'

Gran emerged from his dairy.

We dived on the tray and dragged the mole to safety. Gran spat out his tobacco in disgust and the dog ate it.

My school project was to 'interview a grandparent about life many years ago'. I went out to the old dairy.

'Gran, I need to know about the olden days.'

He was sunk deep in his armchair.

'What did you do on a Sunday?'

Gran shredded his baccy into a neat pile.

'Put on me fustian breeches,' he said, 'and watched tide come in, appen.'

I wrote 'watched tide' and looked at it.

'Fun?' He chuckled a bit then closed his eyes and said nothing.

Gran took his pipe out of his mouth.

'War... Huh.' He puffed on his pipe as I shuffled from foot to foot.

I closed my notebook and edged towards the door.

A wisp of smoke coiled from his pipe but he didn't open his eyes.