I’ve been thinking about musical taste and how to describe it so I asked the team here “…to describe your musical tastes, however you like, and then send/give it to me”. Responses ranged from Spotify playlists to descriptions to diagrams and I thought they were interesting enough to share.

"Some bands in no particular order: The Beatles, Elvis, Bowie, Talking Heads, Elvis Costello, Jonathan Richman, Orange Juice, Iggy Pop, Velvet Underground, The Specials, The Only Ones, The Clash, Radiohead, The Pixies; generally I like all Punk and New Wave (especially the one-hit wonders) between 76 and 84 - after that the horror of the New Romantic era put me off listening to music on the radio; another strand is early 60s girl bands like The Shangri-Las, The Crystals, The Shirelles - well, all of them really; also a big fan of Louis Jordan and that whole 40s jumpin’ jive sound. I used to do the Camden live music pub circuit, both playing and to listen to the other bands. My classical taste is limited, though I know I’m more Beethoven and Bach than Mozart or Schubert. "

"Interesting… when I started thinking about my taste I often like specific artists, but not necessarily the whole genre they’re in, e.g, in jazz music I like Monk and Bill Evans, in jazz funk I like Herbie Hancock and Mahavishnu Orchestra. In dance music I like specific DJs like Sasha, John Digweed, but not Judge Jules or Pete Tong. Here it’s the DJs that are important, more than individual artists and producers. Deep house and garage - the early-mid 90’s US variety, not the later UK garage, or any of the other myriad garage genres. I like Tangerine Dream (before they went bad in the mid-90’s) and Klaus Schulze - “Berlin school” electronic music. What else? Classical music - Bach, Mozart, Beethoven (but more the string quartets than the symphonies)."

Then there was a bootleg album cover with "Lou Reed at a tacky Adelaide hotel (with - I think - Malcolm Young from AC/DC) after the first (and best) concert I ever went to". Or more visual representations… 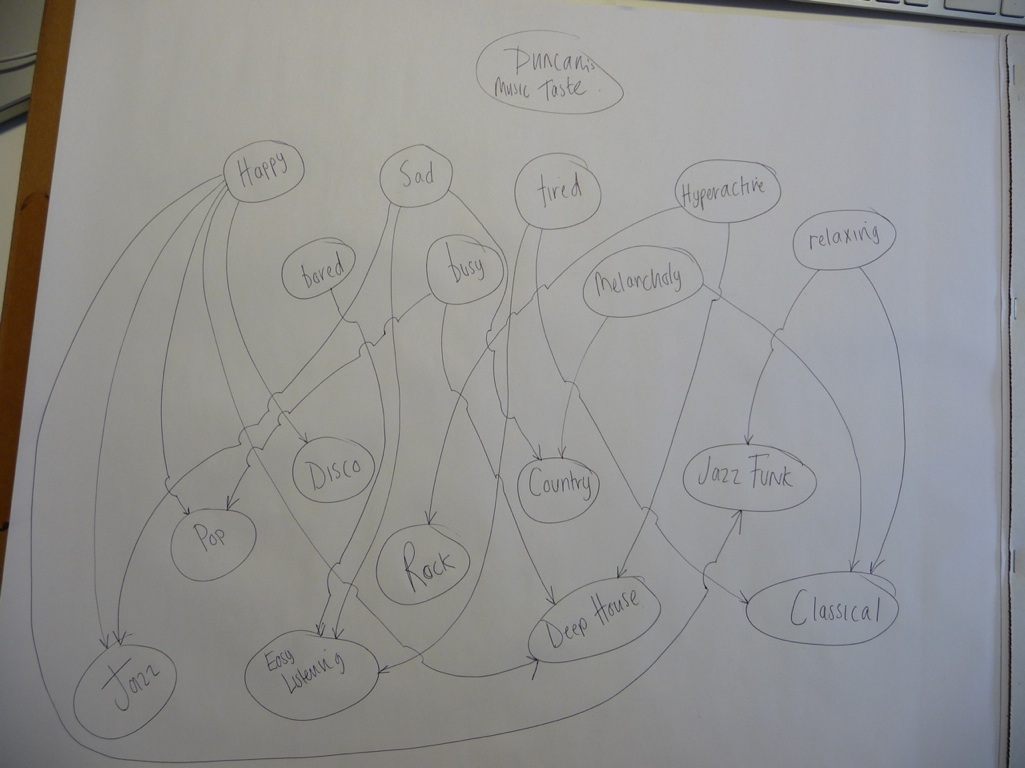 "Here’s a stab at my taste. I realise that my taste is pretty much completely mood based. I have used genres to stop this taking months. I also kept it top level, as I could also have joined things like “Happy” and “Busy” together to produce a different result." 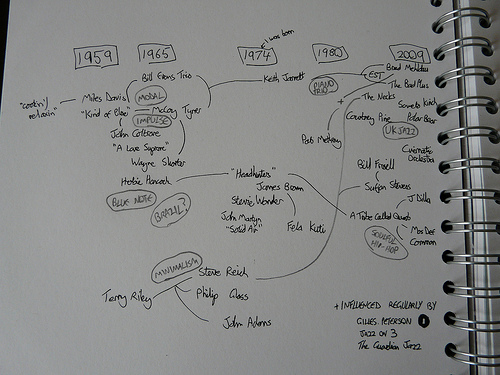 “I had to stop at some point so it’s not comprehensive. But it’s all about connections”

“If asked i’d show people last fm i suppose but thats not entirely accurate.this is a bit more reflective [a spotify playlist of my 500 favourites] and this [photo above] is highly accurate for one period in my life - my record diary when i was 13-17. or in 100words..at least today I like late80sindiepop,beatles,sunshinepop,folkrock,northernsoul,ska,late70sandlate80shiphop,70sdisco,abba,spectoresquegirlgroups,and cilladustysandieuk girlgroups, the first 50 releases on creation, roughtrade, postcard, 4AD, and Mute and lots of versions of Amazing Grace.” 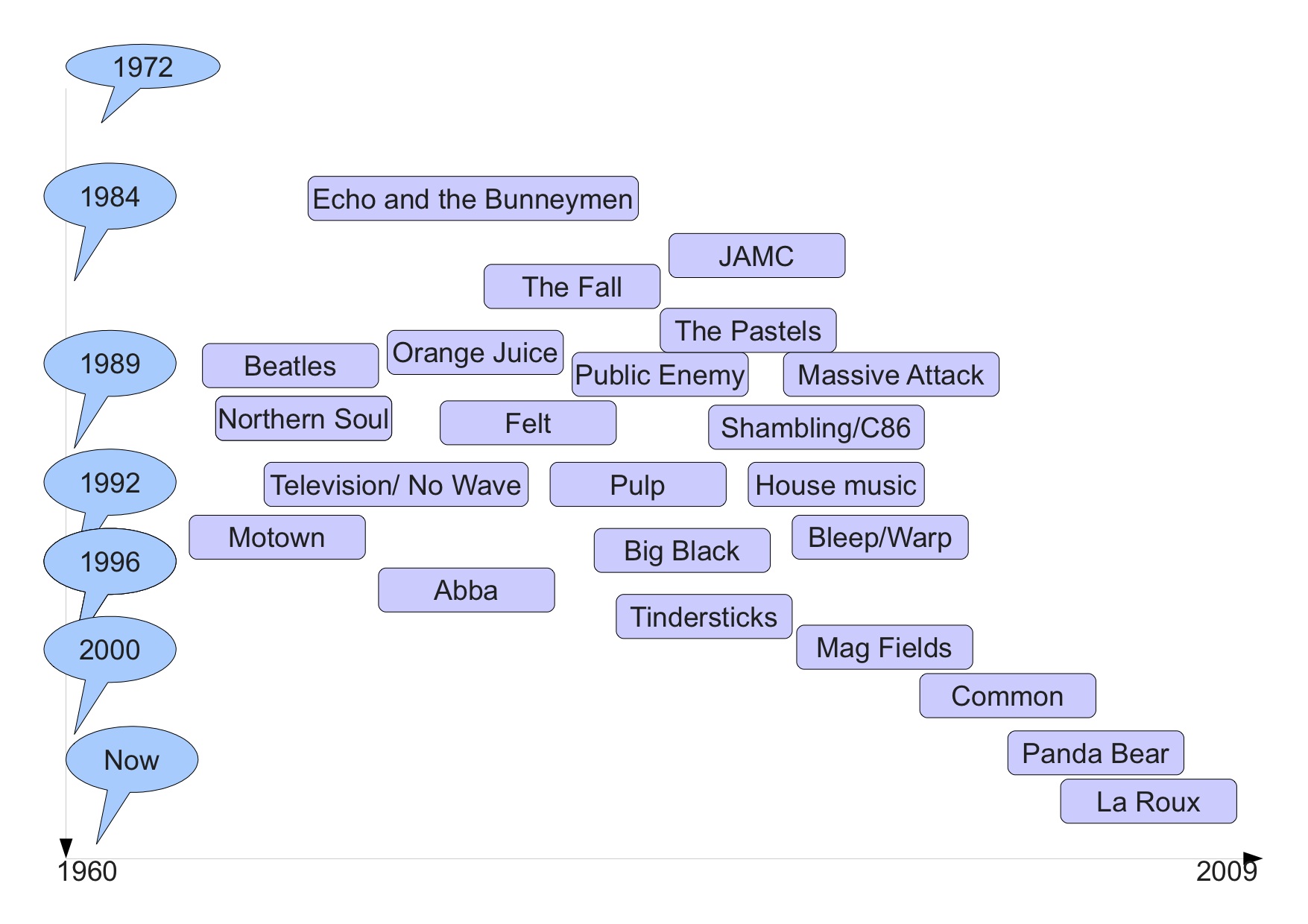 "I like nothing from before 1960. First attempt had 1930 as year zero, but I realised I didn’t like anything from then! X axis shows when the music’s from, Y axis shows the time I first liked the group. I have been ruthless about exercising things I don’t like anymore. This isn’t to show how cool I always have been, but because this is a snapshot of ‘now’"

Obviously this is a small and select sample but some common themes emerged. About half were discursive and half were visual in some way. Most people mentioned specific bands or artists and musical genres, followed by record labels, songs and albums. There were lots of tag-like descriptions, “early 60s girl bands” for instance, identifying more niche genres or scenes and also mood-like descriptions. And there was quite a lot of personal history, obviously your taste changes over time. Also interesting was that some people defined their taste in terms of dislikes.

Paul over at the Music Machinery blog noticed I’d posted my musical taste to Flickr and he asked his readers to send him their representations of musical taste. So I thought I’d do the same over here. What are your musical tastes? How would you best describe them? Do you feel comfortable telling us? Is it too hard to describe? Answers in the comments or on Flickr (tag them MyMusicTaste) please.