What kinds of music does BBC radio play? Which bands are played most? Which DJs play 70s music? Radio Waves is a prototype visualisation that takes data about music played recently on BBC Radio and creates a time profile for any individual radio network, musical genre or radio show. The graph shows, year by year, how many albums were released by the artists recently played on BBC Radio. 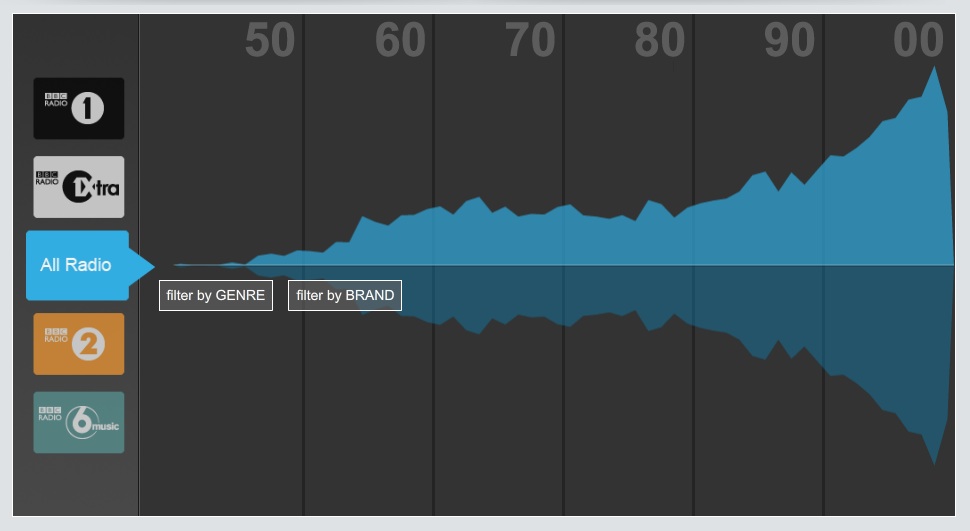 Click here to explore the visualisation or read on to find out more.

After our recent hackday on music visualisation we ran a quick two week sprint with the R&D Prototyping team to develop a combination of the best and the most feasible of the ideas that came out. Radio Waves is the result of that sprint.

Initially the visualisation represents all four of the BBC radio stations we are using; BBC Radio 1, BBC Radio 2, BBC 1Xtra and BBC 6 Music. The graph represents how many albums were released by the bands and artists recently played by shows on that network - so if it has a peak in the 1950s then that network has played artists who were active in the 50s. The visualisation can then be filtered to show the graphs for a particular radio network, a genre or show. 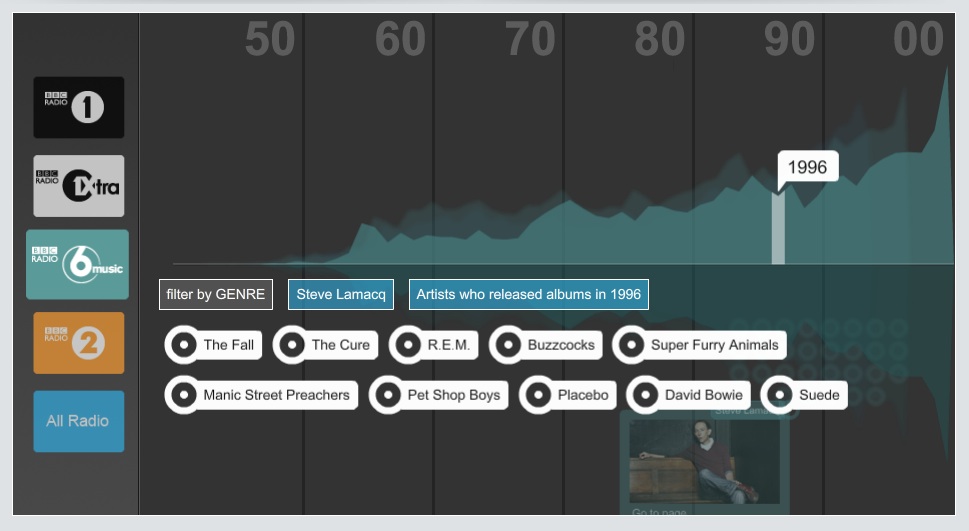 Individual years within the graph can be selected to show a list of artists who released albums in that year and have been most played by the selected radio network or show. Clicking on an artist will show more detail about them and reveal the complete list of albums they released and when.

We start by collating the data for what music BBC Radio has played over the last few months - from tracklistings like this. Note that this prototype is only using a static data set for now. From this we can link to /music data about these artists, and from there to releases from each artist. From the complete list of releases we try to only use albums, not compilations, EPs or singles, as we believe that albums sufficiently represent an artist’s historical profile (this is arguable). We can then take the release dates of all these albums, and the number of times each artist has been played on that radio network or show, to draw the graph. In total we're using about 300 shows, each with a play count and top artists for every year and a list of about 9000 featured artists.

We have to tidy up the data a bit; not all tracks played have MusicBrainz IDs attached, we have to remove duplicate releases (there are lots of “disc 1” and “disc 2” in the MusicBrainz data) and we also remove any albums from “Various Artists” because that's not particularly helpful for our purposes. And we've left out Radio 3, Asian Network and the regional services because we don’t have that much play data from them at the moment. Radio 3 in particular would be difficult because the "releases" they play don’t represent a composer’s active career in the same way as releases for pop and rock bands do.

Radio Waves was built so we could explore the possibilities of visualising our music data and we deliberately constrained ourselves to only use data that we have available right now. We think it has one major but surmountable problem. Our current architecture and data mean we can only go from a show » songs » artists » albums » release dates. So this doesn’t actually represent the release dates of the music that is played on the radio, rather it represents the careers of the artists whose music is played and that’s not completely intuitive. Ideally we would go directly from show » songs » release dates, and at some point, with the help of the MusicBrainz next-generation schema and some dedicated volunteers, we should get this data. 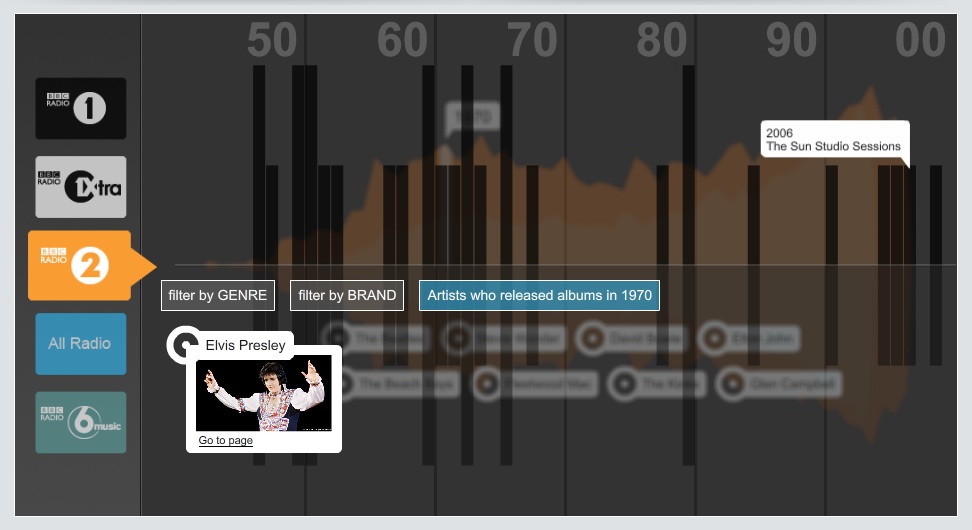 As an end note, we probably also need to tidy up which album releases we use. If you look at the graph for Elvis you can see his original career (he reportedly died in 1977) and then a resurgence in popularity (and therefore re-releases, sessions, best-ofs…) in the last decade. So maybe we should limit the data to releases within the artist’s (or bands) lifetime.