We thought we should help promote a fantastic project from BBC World Service that aims to preserve sounds...

Hello, I'm Kate Arkless Gray and I'm working on an exciting project for the BBC World Service called Save Our Sounds. There are so many photographs and words to capture the world, but barely anything in sound. We want to put that right and so we're asking people to help us preserve "endangered sounds" by recording them and sending them in to us. We've created an interactive map that allows you to upload your audio and place it exactly where it was recorded. Other users can then click around and travel the world in sound.

Getting people to actually record sounds for us is a bit of a challenge, so we're trying to make it as simple as possible. The map uploader is very easy to use and allows you to submit .wavs and .mp3s. The .wavs get automatically converted to mp3 before appearing on the map, so that it doesn't collapse under the weight of the files.

The really exciting bit is that we've been working with AudioBoo which is a free iPhone app that allows you to record an upload sound to the web. If you do this, and tag your sound with "BBC_SOS" it gets fed straight into our map (well, the moderation queue at least) via an RSS feed. Geotags then enable the sound to be placed exactly where it was recorded. Clever stuff.

We have to remember that this is a worldwide project and we have to be wary of assuming that everyone has access to the latest gadgets and high speed internet connections. To help people over the technical hurdles we're also offering a postal option and giving out the World Service phone number so that people can "ring in" their sounds. Their calls are converted and delivered to us as mp3s so that we can check them and add them to the map. Admittedly the quality of phoned-in sounds won't reach broadcast standard, but we don't just want our audiomap to reflect technologically advanced areas of the world.

Digital Planet is featuring Save Our Sounds in next week's programme and they're asking for your help to presvere the sound of 56k modems, dot-matrix printers and floppy disk drives. Can you help?

If you're a regular reader of Radio Labs you'll have noticed quite a lot of noise (and hopefully some signal) about two of our major projects: /programmes and /music. Both services have been designed according to linked data principles in an attempt to not only provide well designed, joined up and coherent websites but also to open BBC data to wider reuse.

Yesterday BBC Backstage announced that this data is now available at two SPARQL endpoints hosted by OpenLink Software and Talis. If (like me) you're new to SPARQL (a kind of SQL for the web) the Backstage blog also has links to tutorials and examples. If you want more details about the kind of data we model the Programmes Ontology and the Music Ontology are good starting points. If you're more comfortable with relational databases please check out the /programmes database schema.

As regulars of the BBC iPlayer Radio message board will be aware, I'm currently looking after the BBC iPlayer for all of BBC Radio. We've a wealth of great content, and I'm keen to make it even easier to find, play and share the great radio programmes you can hear on the BBC.

Anyway, a few weeks ago, we made history by making on-demand programmes available for BBC Radio 5 Live Sports Extra for the very first time. You're now able to listen-again to Test Match Special and our Formula One coverage for seven days after transmission. So, if you missed a great interview after yet another UK win on Formula One, or a great catch in TMS, then I'm pleased to let you know that we've made the unmissable... unmissable.

There are more things planned for the BBC iPlayer's radio content shortly, as some long-term projects reach their welcome conclusion. I look forward to letting you know about them as soon as I can.

Son of the Revenge of Visual Radio

Since I published this post I've learnt that some elements of the trial haven't been finalised yet so I've edited the post to remove some names and dates. I'll come back with full details once they're all confirmed.

In January, Visual Radio came to your PC screen. This Summer It's Phase II. It's bigger. It's better. It's still a trial but it's here for longer.

What hasn't changed is the basic architecture. It's still driven from a Ruby on Rails application in the studio. It still publishes updates with a push model via our distribution partners at Monterosa (though more on that below) and it's still rendered at your end on a Flash client. But... 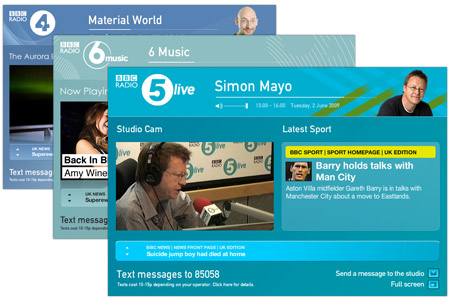 This might sound like a simple administrative decision, but it's meant serious re-engineering of almost all the components in the software chain, and a range of new designs for the console.

More than this though, these shows could hardly be more different from each other. We've seen what Moyles does with music and chat on Visual Radio. Material World is a science and technology magazine and it'll be fascinating to see what Quentin Cooper and the production team do with the new platform.

It's in Widescreen
In Phase 1, producers were often unable to keep the right-hand-side of the console fresh - the bit that shows votes, SMS and the studio blog. Producers had compliance concerns around voting and graphs, and maintaining a blog or approving SMSes for publication turns out to be a lot of extra work in a busy studio. In Phase II, the studio can expand the left-hand-side to take over the entire Visual Radio client. This favours pretty pictures (images, studio cam and the NowPlaying feed) over the more involving reading-and-writing stuff - not our original aspiration, but this is what you find out in a trial.

We've also put screen size in the hands of the visual listener. In Phase II you can expand the Visual Radio client to fill your entire screen.

It's Mobile
Because watching the radio on your laptop just is so last-month, in Phase II you can watch the radio on your mobile! So now we've added a push feed through our new mobile distribution partner - wecomm - who are also building the mobile client for us. We'll publish more details when this becomes available next week.

It's Listening to You
Sending text messages to the studio remains incredibly popular. In Phase II you can do it for free, through the console.

We had decided that you weren't going to be able to vote through the console. Then wecomm pointed out that on mobiles this would mean having to leave the Visual Radio application to send an SMS to vote, then open the app again. Not cool. So now there's a separate feature to participate in votes directly from the mobile or the desktop client.

It Wants to Feed...
The studio team can put BBC News, Sports and Weather feeds on the right-hand-side of the console, or across the bottom of the screen.

...and It's Heeerre!
Visual Radio Phase II launched with Simon Mayo, 5Live at lunchtime on Monday. It'll be running for three weeks (but not on Wednesdays). Find it on the 5live homepage during Simon's show: 13.00 - 16.00

From mid-June we'll be visualising more programmes - from Radio 1, Radio 4 and 6Music.

We've made a monster. We think it's pretty cool.
We hope you enjoy it!

Who's been talking about it?