Today we have launched a new visual radio player! 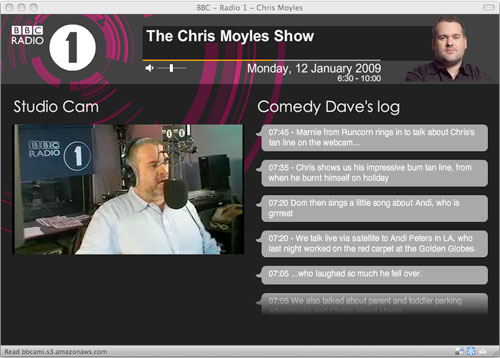 It's available for the Chris Moyles show on weekday mornings (6.30am - 10am) and Annie and Nick on Sunday night (7pm - 10pm). Go to the Chris Moyles or Annie and Nick pages during those times to check it out. Outside of these times you won't be able to see it - but that's why I've written this post. It is also only available for one week as we are trialling the service and hope to get as much feedback as possible to see what audiences think of the concept.

Visual radio is an important aspect of the way in which radio is evolving on different platforms so to quickly recap on what I've written about before; the work we have been doing focuses on complementing radio programmes with additional information such as the network branding, the track that's currently playing and contact details such as sms, phone numbers and email addresses. To use some in-house terminology, we are calling this glanceable information - snippets of information that are suitable to radio content, that you wouldn't want to stare at while you're listening to a show but will be useful if you hear something great and want to know what it is.

The other aspect of visual radio is enhancement. Each show has a different tone and reaches out to different audiences. Network graphics and presenter images help to reinforce the show's brand and convey its own distinctive identity to its audience. Enhancement also means taking advantage of the capabilities of a device and providing new ways to interact with the programme itself. This could be anything that uses the interface of the device or platform to access menus, to participate in games or view on-demand content.

The player we have launched today incorporates lots of new features that you don't get using the standard BBC radio player. While you are listening to the show it updates with live information and graphics. For example, if a track starts playing you see an image of the artist and then the player may update to show you text messages that people are sending in or video of what is happening live from the studio.

The following screenshots illustrate the different features of the player: 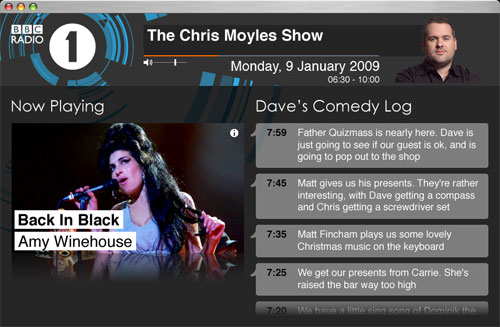 Note that this module is generated automatically by taking the data generated when a track is played through our internal playout system and then using that data to pull in the artist image and wikipedia info from /music. That's a nice bit of integration work by the tech team (more from them and their technical implementation on this project in a follow up post soon)!

A live video feed from the studio and text messages sent in from the audience: 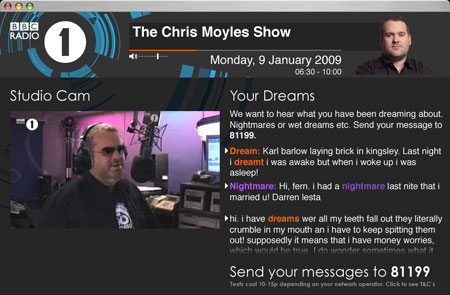 Images that relate to subjects being discussed on air: 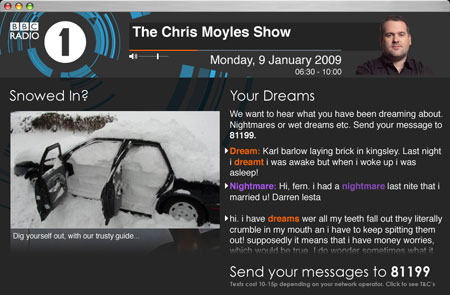 We have tried to do something new with the SMS that we receive. Bar charts and swingometers can illustrate polls and the audience opinion. 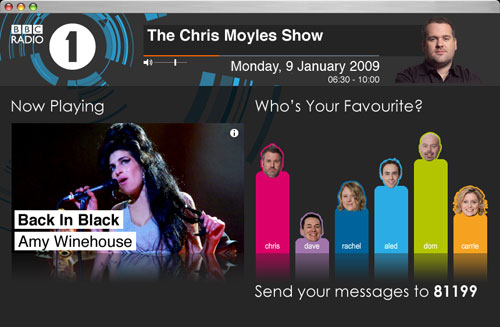 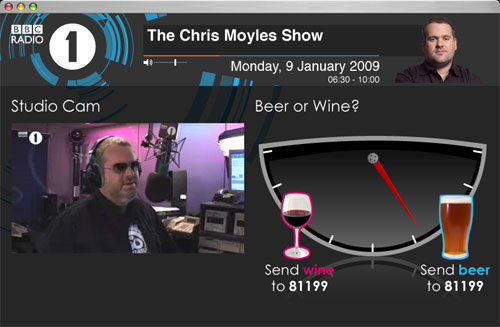 The ability to display SMS and represent it in a variety of forms is an important development for how we deal with the thousands of SMS that radio programmes receive. Obviously its impossible to respond to each one so rather than feeling your text has fallen into a void we now (albiet temporarily) have a way to feedback to our audience.

Each of these elements within the player have been designed to be flexible and modular so that they can be turned on and off at any moment. It was important for the design team to come up with something that would still look impressive and enable a producer to display meaningful information that relates to the broadcast at any time. To enable this flexibility an admin interface provides the functionality to configure the content area of the player so that the video, images, text messages etc can be switched on and off when appropriate. The bar charts and swingometers can also be configured on the fly which means there can be multiple instances of them or they can be updated during the show. All of this is absolutely necessary because anything can happen on a live radio programme! The following image is an example of the interface and you can see that it provides an overview of each module available. One click and the module goes live on the player. 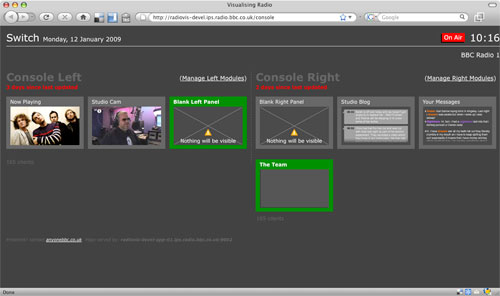 Creatively, visual radio opens up lots of new opportunities, though some radio programmes lend themselves better than others. 5 live for example involves lots of audience interaction and breaking news stories and Mark Kermode film reviews are already streamed live on the website. There are huge challenges when you attempt to visualise programmes that are often prepared on the fly, which is why it's so difficult to come up with a one-size-fits-all solution. Theoretically there may be elements that will be common to all programmes but it's still important to design features that reflect the identity of the programme and its content. Coming up with an appropriate design solution also means taking into account complex technical considerations such as identifying the variety of data sources available and how we can be use that data while still ensuring it reflects what is being broadcast on air.

In terms of interactivity there is very little in this version of the player. This was a concious decision as we wanted maintain the philosophy of creating something that was glanceable and complementary to the broadcast. However in future versions we may explore how we can incorporate interactive features, things like Radio Pop functionality or the ability to contact the show from within the player.

But this is just the first step and we are hoping we can learn as much as we can from this trial and use the feedback to further develop our concepts.