Video games and music at E3

In years past, E3 has signalled fevered excitement from console fanboys around the world eagerly waiting to see who will steal a march in the latest round of the console wars. 2007 heralded a new E3, one which is less about glitz, glamour and booth-babes and more about giving smaller publishers a chance to be seen and heard on an even playing field. The Big Three console manufacturers (Microsoft, Nintendo and Sony) have continued to hold their traditional E3 press conferences in which they attempt to brag about how theirs is the format of choice and announce new products - both hardware and software. Much like Steve Jobs announcing the latest shiny thing from Apple, these press conferences are important events and are now streamed live around the world.

It will depend on who you ask as to whether there was much for the hardcore gamer to get excited about (although the announcement that long-standing PlayStation 3 exclusive Final Fantasy XIII is in development for the 360 almost melted the internet) because following the remarkable success of the Wii, everyone is clamouring for a piece of the newly expanded casual gaming market. 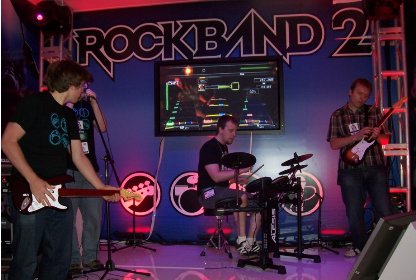 Any third-party developer invited to present at one of these press conferences is clearly highly valued by the platform owner and Microsoft's briefing included sections from both Red Octane, developers of Guitar Hero and Harmonix, developers of Rock Band, illustrating the popularity of music games. Music games can straddle both the hardcore and casual gaming markets as they allow for great accessibility and yet still provide a challenge for kids with too much time on their hands. These two massively popular franchises are also demonstrating the power of downloadable content with in-game sales even rivalling iTunes. The cross-over from playing a game to making music will take a step further with upcoming releases of Guitar Hero World Tour and Rock Band 2. The former will include a studio mode allowing players to create and share their own songs while the latter's premium ION-made drumkit will also function outside of the game.

If playing 3/4-size plastic instruments isn't for you, Nintendo is developing Wii Music which will utilise its more sensitive Motion Plus Wiimote add-on to simulate playing over 50 instruments (even conducting an orchestra). You will also be able to use the Wii's Balance Board controller to act as pedals for your virtual drumkit. Nice touch.