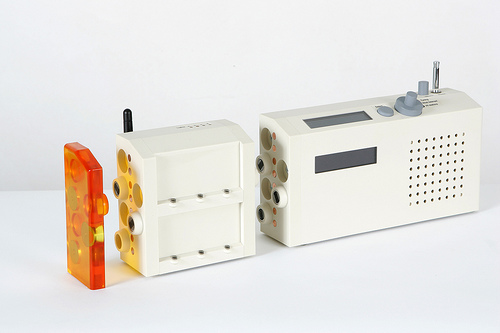 Olinda is a new radio that has been built for BBC Audio & Music Interactive. It includes innovative features like modularity and social networking in a physical device. But we normally build websites and other digital media so why would we want to build a new radio? To actually have a device in the physical world? These are the three reasons I give...

1. Physical things make people think differently and can help them better understand new concepts.
2. The digital radio market in the UK is fairly mature and very successful but there is not a huge amount of innovation at the moment, we think there might be room for something that will help stimulate that market.
3. Online radio is great but people still like to listen to the radio through actual radios.

So last year we commissioned a design and technology consultancy called Schulze and Webb to build a real, working, physical, innovative DAB radio. It has two main features; modularity - making the radio expandable - and social features - for discovering programmes and starting conversations. At Radio Labs we have recently been thinking about how radio and social networking could work together, if you came to Futuresonic you may have heard us talk about it. Olinda is one way that they could meet. 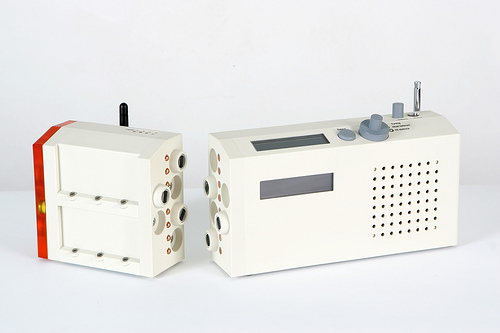 Olinda is an extendable and customisable radio. On the side of Olinda is a studded, magnetic connector for plugging in expansion modules. This is an open, standardised hardware API - with defined connections and defined protocols for the data. It's a bit like the expansion port on an iPod, and this makes the radio modular. It's a hardware version of the APIs around websites like Flickr, del.icio.us or Twitter - which, by virtue of their APIs, are all surrounded by a rich ecosystem of supporting sites and products. These plug-in modules for Olinda can use the API to find out information like which station the radio is tuned to and the current LiveText, and also lets them send instructions to the radio. This enables anyone; the manufacturer or third parties, to create add-on modules which should all work with any radios implementing this API. And we think this could create a secondary market for DAB add-on products which will benefit both manufacturers and consumers. 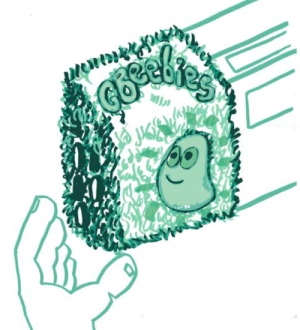 A tear-off player module for kids. It records all their favourite childrens' radio progamming and then unplugs to become a standalone MP3 player. 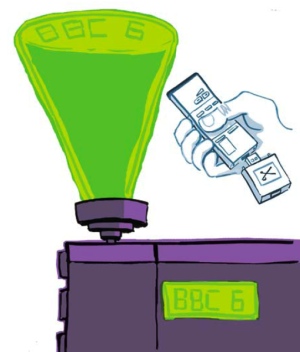 A projector module that projects the station name and currently playing track details onto your ceiling. 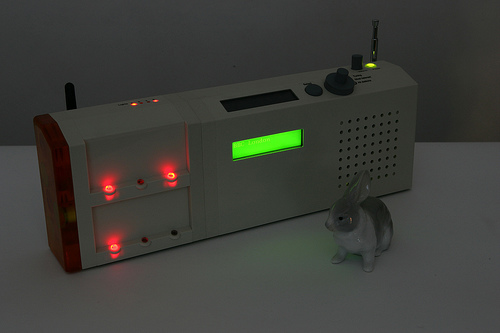 As part of the project Schulze & Webb have built a single module for the radio which uses the hardware API and proves that it works. It's a social module which includes wi-fi wireless networking and integrates radio listening with someone's close friends, their immediate social network.

When you get the module you configure it to connect to your home wireless network and then you set it up with your friends. You'll notice in the pictures that there are slots for your friends - these are wipe-clean spaces for writing your friends' names or sticking in a picture. So each slot on the wireless is customised and configured to represent one of your friends. And each slot has an associated combined light and button.

So we hope this might provide a sense of community around your radio, harking back to the times when families and friends used to gather around the radio to listen. But Olinda provides this in a glance-able, non-intrusive manner. And it will start to support conversations around radio programming and the discovery of new shows and stations. Social networking for your radio.

The configuration and communications all happens on a website called Radio Pop. It's a prototype site we built last year and will shortly be re-launching as a more robust beta. When you first turn on your Olinda radio you will be given a unique code for that radio. You can enter that code on the Radio Pop site to associate that particular radio with your account. From then on, whenever you use Olinda to listen to the radio it will update your Radio Pop account with that listening. And when your friends listen to their Olinda radios, their data will be sent to Radio Pop and then on to your radio, causing those friend lights to turn on. But, obviously I guess, it's not just other Olinda radios that this will work with. Anything compatible with Radio Pop will work with Olinda and vice-versa. So if your friend is listening to BBC radio through the internet then their button on your radio will still light up. 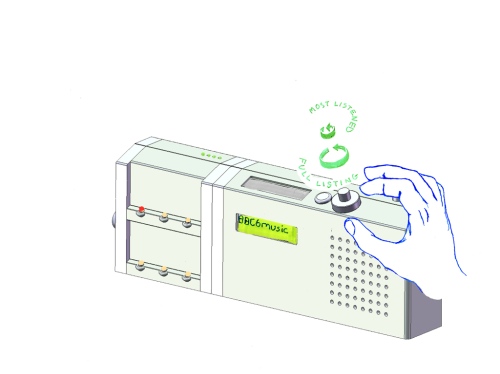 We've tried to use some of the expectations of people who are used to websites and interactive products in the design of the radio; the station presets on this radio will be automatically generated. The outer tuning ring lets you scroll through all the available radio stations. The inner ring only scrolls through the stations that you listen to most. And the radio should be suitable for its situation, so there are two screens. There is a forward-facing screen for viewing information like the scrolling LiveText from across the room and a secondary screen for when you're standing over the radio interacting with it. The radio itself ended up being relatively visually conservative. This is partly due to cost and partly because we didn't want to take anything away from the concepts and new ideas by making it look unlike a conventional radio.

SHARING IT
Olinda is a design prototype and we want to encourage development of these ideas and stimulate the potential market around Olinda, similar DAB radios and the modular add-ons. Maybe it will eventually lead to some real products. We feel that part of the role of the BBC is to encourage innovation like this and to maybe do things that others wouldn't consider. So we are making all of the ideas and concepts behind Olinda available under a Creative Commons-type license - licenses that basically allow for sharing and remixing of the work, provided the original author is credited. What we're not doing is building a product for the BBC to sell.

The BBC grants any third party a fully paid-up, perpetual, worldwide, non-exclusive license to use, modify and sub-license all concepts, design elements and novel technical solutions in Olinda, provided such third party conspicuously and appropriately publishes on each copy an appropriate notice acknowledging the BBC and the copyright that it owns. In non-legal terms: if you can see it, you're more than welcome to it (and please say thanks).

You can read lots more about Olinda and its associated ideas by downloading the pamphlet. Or head over to Schulze & Webb to read more about how it was developed. There is also a press pack for download (warning: 85MB).

Postscript: Olinda? It was named after a city in a novel by Italo Calvino. We have since discovered it's also a real city in Brazil.

Update: I just wanted to clarify that we aren't planning to ship CAD files or source code now that Olinda is out in the world. Most of the heavy lifting in the radio is done by chips that are bought in, so publishing their code isn't possible. We'd love to see these ideas adopted by radio manufacturers, and part of being a good citizen in the industry is to work with them. So the license is there to say 'go ahead' to any manufacturer who wants to pick up the design elements, how the hardware API works, and the other solutions the radio demonstrates.