Arriving in Austin for South by Southwest Interactive, the first thing you notice is that everyone is clutching an iPhone (this being the BBC, I should point out that other mobile phones are available). This tells you much about web geeks' desire for Apple products but also about the direction in which the industry is moving: experience, community and immediacy are everything. (I would be willing to bet that more tweets are sent during the five day conference than at any time throughout the year.)

SXSW covers a wide range of media topics across music and film and illustrates how interactive is not only another medium on which to offer services but is very much media itself. With hundreds of sessions and around 7,500 people attending the interactive festival there is too much on offer for us to fully explore but there are lots of write-ups across the web. 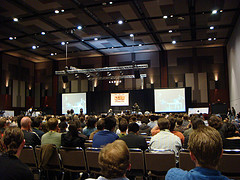 The biggest talking point of the five-day conference was the keynote interview of Facebook CEO Mark Zuckerberg by Sarah Lacy and I managed to grab a seat at the back. Zuckerberg is only 23 and is certainly no politician or powerful public speaker and his repeatedly closed answers were in stark contrast to the transparency and openness of the majority of speakers. Lacy did not help him though and in the end the audience's questions targeted her as much as their dislike for some of Facebook's more controversial features.

While the focus for most of the panels was interaction design, covering topics from kinetic computing to geo-location, there were a number of excellent technical sessions. Scalability boot camp and A critical look at Open ID have given me a few things to investigate for two soon-to-be-released applications. Identity, privacy and security on the web are hot topics and Open ID's decentralised approach is an attempt to make things more transparent, but it is by no means a perfect solution. Panels such as this which debated opinions on a particular issue were both engaging and reassuring and I left feeling I understood more but also wanted to investigate further. Panels such as Emotional by design which attempted to present a collaborative view on a subject were often weak and offered little to walk away with.

Panels on the latest round of the browser wars and the latest evolution of JavaScript libraries exposed the issues around creating a unified experience for everyone and what vendors, standards bodies and the development community are doing about it. It seems that while the vendors sit on standards bodies and argue about how to implement padding and margins (amongst other things), the community is hard at work making their current offerings behave. Representitives from jQuery, Prototype, Scriptaculous and Dojo were not there to argue which was the best but discussed how and why they have implemented features in their libraries and best practices for using them.

Unfortunately the session I was most looking forward to, Taking your web talent to the video game industry, was very disappointing. The only conclusion I was left with: make flash games (!)

SXSW also presents ample opportunity to meet new and interesting people and to learn more about their thoughts and methods. Veterans will tell you the important stuff happens outside of the panel sessions. We certainly made the most of it.