A recent BBC Click article discussed the topic of visual radio, an area that I've been working on during the last year or so. The article gives a good overview of some of the issues around visual radio but I thought I'd expand on some of the topics that it touches on.

Audience expectations is one of several key factors currently driving visual radio. Andy Parfitt mentions in the article that:

and this is very true, we live in a very visual culture where almost all the gadgets we buy have rich colour screens that give us feedback when we interact with the device itself and consume media through it. However, if I'm listening to the radio on my mobile and I hear a song I like there is nothing that tells me what it is, and this can be very frustrating. Its not a very satisfying user experience but visual radio is an attempt to address this situation.

One of the most common reactions I get when using the term visual radio is 'isn't that just tv'? The simple answer to this is no. The work that I've been focusing on complements radio programmes with additional information such as the network branding, the track that's currently playing, contact details such as sms, phone numbers and email addresses. To use some inhouse terminology we are calling this glanceable information - snippets of information that are suitable to radio content that you wouldn't want to stare at while you’re listening to a show but will be useful if you hear something great and want to know what it is.

A good example of this is from our current trial DAB slideshow service: 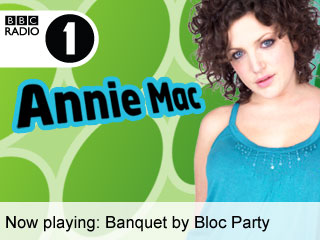 To view the DAB slideshow images you need device such as the iRiver. If you don't have one you can also check out examples from other broadcasters on the page that www.future-of-radio.co.uk have put together.

In a similar vein is the Radio 1 3G trial that is not available yet but will hopefully be broadcast in the near future. For this we have the same information, however we have also been testing out how we might integrate images pulled from the presenter galleries on the website. Also the Radio 1 logo animates in time with the music which is just a bit of eye candy that looks good on your phone.

Enhancement is also an important aspect of visual radio. Each show has a different tone and reaches out to different audiences. Network graphics and presenter images help to reinforce the show's brand and convey its own distinctive identity to its audience. Enhancement also means taking advantage of the capabilities of a device and providing new ways to interact with the programme itself. This could be anything that uses the interface of the device to access menus, to participate in games or view on-demand content for example. With technologies such as IPTV short form video is also a possibility, either live or on-demand it’s something that could be useful to present interviews with guests or user generated content.

To illustrate an example of this here is a short flash movie from an internal demo that was put together to convey a rich way of presenting a radio programme using IPTV:

Sorry, you need to update your Flash Player

A few things to point out here are:

The playful way we have introduced in-studio footage swapping the Radio 1 logo with a video of Colin Murray. We decided very early on that presenting full screen footage of the studio isn't very compelling so Colin only appears when there is a bit of chat between tracks or when he interviews guests. 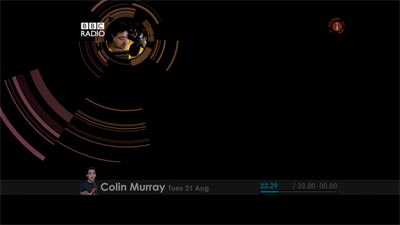 When music is playing there are dynamic images of band shots and single/album art. 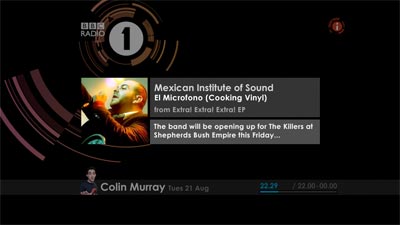 Text message stream displaying incoming text messages sent into the colin murray program. we get lots and lots of sms sent in to radio programmes and the presenters only ever read a very small portion of them the sms ticker therefore is a simple way to give feedback to the audience. 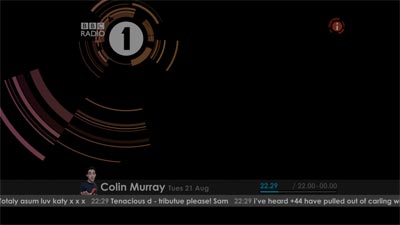 A simple method of voting on tracks, this would not only feedback to the audience but also to the presenters so that they can gauge interest on certain tracks they play. 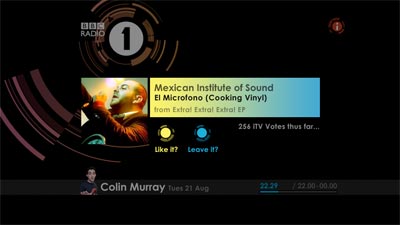 This demo is not something that we can build and broadcast overnight but it does provide a vision to aim for and it illustrates the core components that make up visualised radio. Also this example highlights how it’s important to have a different approach to radio than if we were presenting TV.

As it’s still evolving there are lots of challenges from a design perspective concerning visual radio. The first is to establish a consistent user experience. There are lots of devices with their own constraints in terms of screen resolution and dimensions and they also have different inputs for interaction. The user experience also changes depending on the technology used to deliver the content. For example, its takes time for the images to load when you’re listening to the radio using DAB on the iRiver and there are issues of compression when you’re watching content using 3G. At the moment it’s trial and error but I can imagine in the future there will be design patterns for the way we interact with visual radio and guidelines for best practice of visual radio assets.

The subject of music vs speech radio is also an important area to highlight. Its important to bring up this distinction because they both require a different approach in terms of design. So far we’ve only really looked at music programming and music content is relatively easy to deal with, band photos, track playing info and additional snippets of info are all useful. However speech content such as that on radio 4 requires a different approach. On a practical level the data is not as dense as it is with music info. We create our own internal data for programmes however if for example we haven't got them, then for music content band photos could potentially be pulled in from flickr and gig information from last.fm or upcoming.org. For speech radio we have the base level information (programme, contact info etc) however to do more creative stuff we need the right metadata to help us connect pieces of data together. An interesting starting point that has lots of potential are the tags on the /programmes site for example.

Finally being sensitive to the audio is an important design consideration for speech radio. An example I often use is the BBC documentary Return to Sarajevo. When listening to such documentaries it’s only the most basic level of information that is necessary because the audio creates images that can be so vivid in your head. Its easy to offer a lot of features but with powerful documentaries its often best to strip things back and keep it simple. I guess the important factor here is always giving the person listening/watching the option to turn things off if they don't want to be distracted!

Visual radio is still in its experimental stage which means there is a lot of opportunity to play and test out ideas. The work Tristan has done recently around the Archers is an example of this and currently as a 10% time project a group of us are exploring ways of mashing up the now playing data with content from across the web.