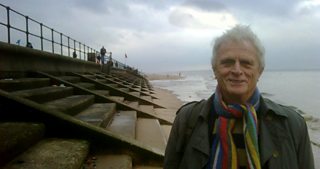 Even though my dad had to undergo 'instruction' by a priest before he was allowed to marry my Catholic mother in church, it did nothing to alter his view that all religion was nonsense.

Not that he exactly enlarged upon this view. He simply contented himself with brief irreverent interjections whenever the subject arose.

So, for example, when my mother embarked upon a lengthy story about how she'd prayed to Saint Anthony in an attempt to learn the whereabouts of a lost brooch, he would lean forward wearily, wave an arm across his chest as though sweeping away an irritating dust cloud, and mildly inform everyone in the room that mother was talking 'her usual muck'.

His expressions of political allegiance were equally laconic. Any canvasser who knocked on our door at election time and found it opened by dad, was brusquely told 'We're all Labour here', before the door was closed firmly in their face.

Because 'we were all Labour', there was never much talk about political issues in our family. But, under dad's influence, we all took it for granted that the Conservatives only looked after their own kind.

And in dad's vocabulary, this put them on a par with the Rotarians.

Even though I've asked other members of my family, I've never been able to discover the exact origins of any of my father's obsessive hatred of the Rotary Club. But from the age of six or seven I'd come to regard its members with much the same degree of hostility that my mother reserved for Satan and his works.

'They're all in it together', dad would constantly assure us.

He was so adamant about the perniciousness of the Rotarians, that when I grew up, became a university lecturer and was invited to talk one night to the local branch I hesitated for several days before replying.

What could I do? Even though my father was long dead by that time, an acceptance would feel like jumping on his grave. And after all didn't the fourth commandment of my mother's Holy Roman Catholic Church demand that I honour my father?

I eventually wrote back and said that I was too busy. I chose not to mention dad's eccentric belief that all Rotarians were crypto-fascists or indeed that my final decision had been based upon nothing more (or less) than my 'mother's muck'. Sometimes less is more.

Children and politics. That'll be up for discussion when I meet the author of a research paper called The Form of Children's Political Engagement in Everyday Life. That's at four o'clock today or after the midnight news on Sunday or on the Thinking Allowed podcast. Also in this programme - remembering the 1981 Liverpool riots.

Laurie Taylor is the presenter of Thinking Allowed

This episode of Thinking Allowed was first broadcast on Wednesday 13 July 2011 and is repeated on Sunday 17 July 2011.

Supermarket Symphony and Late Nights at the Blue Boar: Music on Radio 4