Cheryl Tipp, curator of natural sounds at the British Library, previews episode 11 of Noise: A Human History. The Bells is broadcast on Monday 1 April. 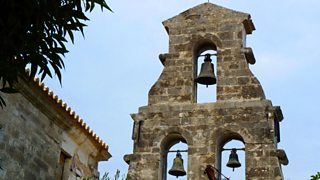 Episode 11, The Bells, is dedicated to the role of bells in human society and looks at how this sound has been employed to deliver messages of devotion, control, the passage of time and even death.

This is a sound that has attracted me for years, from both a listener’s and a recordist’s perspective.

From the giants suspended in cathedral towers, to delicate items sewn onto the robes of a priest, the sound of ringing bells can conjure up a multitude of meanings: power, beauty, gravitas, peacefulness, lure and dedication.

The British Library’s Sound Archive contains a variety of recordings that feature bells in one way or another.

Sometimes these are an indirect component of a recording, for example the peal of church bells drifting into a recording of a passing train or a woodland atmosphere. At other times, the bells become the focus of the recording.

Many field recordists are drawn to the sonorous quality of ringing bells, either purely for the sound itself or for the connections that these sounds have with cultures around the world. The anthropologist and field recordist, Steven Feld, made a study of just these relationships which resulted in a CD series entitled The Time of Bells.

Even writers have taken note of the power of bells and the messages they convey. Charles Dickens makes special reference to the imagined voice of church bells in Little Dorrit. As one of the main protagonists of the story, Arthur Clennam, sits in a coffee house in London, he listens to the sound of nearby bells:

The Bells has to be one of the highlights of the Noise series for me. Beautifully crafted, full of interest and bursting with the most wonderful sounds, this has inspired me to build on my own collection of bell recordings.