The Beauty of The Once and Future King

Editor's Note: Adam Roberts, author and Professor of 19th Century Literature at Royal Holloway, has written a number of critical works on both SF and 19th Century poetry and is a contributor to the SF Encyclopedia. Here he reflects on the beauty of T.H. White's writing in The Once and Future King.

T.H. White wrote his undergraduate dissertation on Malory’s Morte D’Arthur, and he knew the Arthurian legends pretty well. Still, he was surprised when, a decade later, he re-read Malory’s fifteenth-century prose-epic. ‘I got desperate among my books,’ he wrote to a friend in 1937, ‘and picked it up in lack of anything else. Then I was thrilled and astonished to find that (a) The thing was a perfect tragedy, with a beginning, a middle and an end implicit in the beginning and (b) the characters were real people with recognizable reactions which could be forecast.’ Inspired he wrote The Sword in the Stone (1938) as a sort of prequel to Malory, detailing Arthur’s childhood. Picked up by an American book club it quickly became a bestseller. When Disney bought the rights White’s money worries were behind him. He wrote sequels: The Witch in the Wood (1939), The Ill-Made Knight (1940). After World War 2 he combined these with new material (The Candle in the Wind) into a single-volume The Once and Future King (1958). The musical Camelot and Disney’s cartoon Sword in the Stone brought a global audience to the books.

But although White believed himself staying close to Malory, the two works are very different. Malory’s Le Morte D’Arthur (it should be La Mort D’Arthur, since the French word mort—death—is a feminine noun; but Malory was blithely ignorant of that fact. Modern scholars often spare his blushes and refer to ‘the Morte D’Arthur’)—is a long, incident crammed narration of many battles, jousts and quests. Malory’s King Arthur is a war leader; he conquers Rome and rules a European empire; when he encounters a dangerous giant, Malory says he ‘cut his baly [belly] in sundir, that oute wente the gore.’ No messing about. His knights are certainly motivated by a chivalric sense of honour, but nonetheless they fight endless battles, both against external enemies and against one another, for all are as quick to fury as children. There is both grandeur and wonder in Malory’s retelling of the Arthurian legend, but there’s also a great deal of rather restlessly belligerent episodic chunter.

One key way in which White’s writing differs from this is simply that it is so charming. The Once and Future King is a book to fall in love with, creating a world readers yearn to visit, although they never can. White’s characters are profoundly alive and engaging, not least because White understands (as Malory does not) that perfection in a human being is a kind of monstrosity. Arthur’s knights mistrust Galahad because he’s too pure, too accomplished, too good. ‘If people reach perfection they vanish, you know,’ says Arthur. The most magnificent creation in the novel, I think, is Lancelot: physically ugly and with a streak of sadism in his soul (of which he is well aware and which he represses), yet beautifully, magnificently human, driven by a sense of fairness and a prodigious capacity for love and loyalty. 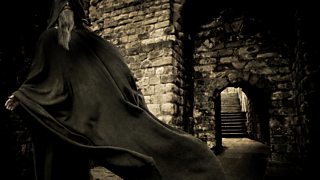 White wrote most of The Once And Future King against the background of the hideousness of World War 2. In 1941 during the darkest months of the war, living in Ireland to avoid being drafted into the army, he wrote a short, fifth Arthurian volume called The Book of Merlyn (it wasn’t published until 1977, years after his death). In this strange addendum to the series, Merlyn looks sorrowfully upon the horrors of 20th-century warfare, and preaches pacifism to the world. In a letter to a friend from the time he was working on this final book, White wrote ‘I have suddenly discovered that the central theme of Morte D’Arthur is to find an antidote to war’. The suddenness ought to give us pause. Malory really isn’t anti-war. But, to convince himself that his ‘sudden’ epiphany was actually integral to his whole vision White decided to revise the whole work, accentuating the book’s moral debate between ‘might’ and ‘right’. The anti-war theme was very close to White’s heart, and it’s commendable in many ways; but the parts of The Once and Future King that are most concerned with it are among the weakest.

The truest genius of White was not his preaching, no matter how laudable the sermon. It was his ability to evoke ordinary people and landscapes, especially English landscapes, with extraordinary vividness and freshness. A beach at low tide is rippled ‘like the palate of your mouth’; the winter trees outside Lancelot’s castle ‘stood up in skeleton, like maps of the veins of the nervous system’. The books are packed with the sort of writing that makes the scene come alive, as if we feel it upon our own bodies. In what may be my favourite passage in the whole work, Bors picks up a letter written by Gawaine, something White considers as an aesthetic object in its own right, rather than a mere functional means of communication: ‘he tilted it in the failing light, admiring the zed-like g, the curly b, and the curved t, like the blade of a plough. Each tiny line was the furrow it threw up, sweet as the new earth.’ That’s beautiful; and in such beauty—vivid, intimate and true—White surpasses even Malory, for all his splendour.

More on Adam Roberts and his books.

Discover more and listen to The Once and Future King.

The moment Arthur and Guenever meet.

Discover Arthurian myth and legend in the UK and Ireland.