Ed's note: Radio 4's Bookclub was on Sunday 6 November and is repeated this Thursday 10 November at the new time of 3.30pm. More listening options including details of the podcast archive at the end of this post - PM 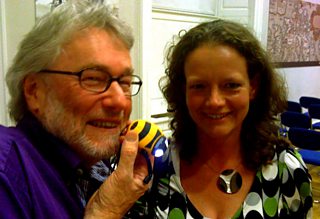 Iain Banks at the National Library in Scotland, Edinburgh, talking about The Wasp Factory.
A reader, Janet, brought along her wasp torch for Iain to sign.

I'm fairly sure that Iain Banks is the first guest on Bookclub of whom I have asked the question: have you ever let yourself be psycho-analysed? I was therefore slightly disappointed when the answer was no, but it was worth a try.

If you know The Wasp Factory, the book that launched Iain's serious writing career 27 years ago, you will know why the question arose. Frank's story, which gives the book its shape and its spirit, is one of grotesque adolescent excess, particularly in the matter of violence.

He has killed three people (at least, we're told, one of them a sibling) and much of his delight while he is growing up comes from meting out undeserved punishment on any living thing that passes by. Take the alarm clock contraption which involves wasps being pinned to the hands and, as a consequence, being killed to a timetable set by Frank, allowing him to wake up to see his latest victim being squashed as the clock strikes the hour, with another one coming along behind.

The book is a picture of disturbance, a kind of punk's-eye view of the world, which is a place of gothic horror and badness. Yet, as Iain told us, "Frank thinks he is relatively normal - it's as simple as that."

You can see why I wondered if he'd ever had his head examined to see where the story came from, and he recalled happily a launch party for one of his books in Edinburgh when an American student asked him if he had experienced a very troubled childhood, expecting the answer yes. Iain pointed out his grey-haired mother in the crowd, who duly obliged with the truth: "Och no, Iain was always a happy wee boy."

We were talking in the National Library of Scotland in Edinburgh, where our readers had been re-reading the book, sometimes after several years, and returning to the themes that Iain has picked up in his overtly science fiction books (which he writes under the name of Iain M. Banks, a distinction which I think he now mildly regrets) and which have given him a cult following.

The Wasp Factory presents a world where the certainties that Frank lives with are ones that would repel or terrify the average reader - burning dogs, tortured wasps, murders, a bizarre substitute religion in which he believes that the future is foretold by one of his grotesque killing machines, which kills its animal victims in a dozen different ways. So why was the book so popular?

His answer is that he thinks readers get the joke - "it was a hoot and a giggle" - in a way that critics certainly didn't. A number of reviewers wondered how a publisher could stoop so low in letting the book onto the streets. Why can't they get it, he wonders? "It's a simple method, gross exaggeration. Being a science fiction writer helps - the term is extrapolation but it's basically exaggeration."

When Eric, a brother whom Frank hasn't killed, emerges from an old-style psychiatric hospital, it allows Frank to appear normal by comparison, but readers learn of the strange happenings in his past. By the end of the story, Franks makes a discovery that is clearly one of the most important of his life and will shape his future.

We do mention in the course of the programme what this revelation is, simply because the book has been around for long enough for that to seem reasonable, but I won't talk about it here, in case some of you are reading the book for the first time. Let's just say that it changes his identity.

The story is set in a community in the far north of Scotland, which Iain knows well, on an island. Frank's father Angus, an eccentric doctor, is part of the psychological puzzle of the novel, going every now and again to Inverness to sell drugs, which he makes at home, and perhaps sharing some of the Frank's attitude towards women - in the absence of a mother in the house, he rails against the betrayals of women, even Mrs Clampy, the housekeeper, who is a bastion of sanity in the place. Iain is happy to describe it as a psychological study: Frank creates not just a physical environment that suits him, and his urges, but a mythological one too.

Iain is as convinced an aetheist as you are ever likely to meet (he will acknowledge that perhaps 1% of him is simply agnostic, but no more). Iain says, as you might expect, that he's always found Frank a fascinating character, but he echoed the feelings of surely nearly every reader of the book when he said that he wouldn't like to find himself living next door to him.

I don't know if you agree with the reviewer who said that he found it incomprehensible that a publisher could have stooped to such levels of depravity (that was The Irish Times) or with one of our readers who said that, having not expected to enjoy it, she found herself reading the gory and funny bits to her husband on a long car journey and laughing out loud. Either way, it was a landmark book - a piece of gothic fiction and fantasy that established Iain Banks' career and seem to fit happily into the early 80s punk-influenced popular culture. I hope you enjoy the programme.

Our next recording will be with the American writer Art Speigelman on his phenomenon, Maus, an allegory about the Holocaust in graphic novel form.

And the following week on Tuesday 13 December, we're discussing God's Own Country by Ross Raisin, a young writer who's considered one of our most promising authors. It was his first book, in 2008. So if you want to be one of the group of readers on either of these occasions, both in London, let us know via the website.

The next programme on air will be with Sebastian Barry, author of The Secret Scripture, on December 4th (repeated on Thursday 8th) and I can promise you that it is a corker.

And just to remind you, the new time of our Thursday edition is now 3.30pm.

In Our Time newsletter: The Moon