In Our Time: Cosmic Rays

Editor's note: In Thursday's programme Melvyn Bragg and his guests discussed Cosmic Rays. As always the programme is available to listen to online or to download and keep. 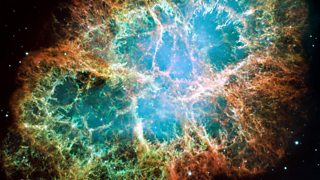 So, I did a programme about physics! I wish I'd been able to listen to that programme about sixty years ago when I was doing physics and got into a state of serious confusion. The way the contributors today talked about the universe made it seem so dynamic and unfathomable and powerful and, above all, vast and in a state of permanent turbulence, and yet they track it through microscopic particles and extraordinary attention to the smallest details. Whoever said that the people who did physics were the clever people was right, I think.

Been a week of skidding around the country. Last Thursday I went to Lincoln and walked up Steep Hill – it is – in the almost blinding rain and wind to go to the cathedral which is vast. I arrived just in time for Choral Evensong. Whatever religion you have or none, these services at five o'clock in all our great cathedrals and abbeys are a unique opportunity to listen not only to great music, beautifully sung, but to understand the strength that tradition can have. Yet, as usual at Choral Evensong, the choir was not much smaller than the congregation, but the music filled the enormous vaults of this cathedral and the small nucleus (reminds me of what Alan Watson said about the nucleus being a person standing in the middle of St Paul's and the whole atom being the rest of St Paul's) was still there.

And about a week later I was in Ely, surely one of the most lavish buildings in the land, this time the choir outnumbered the congregation, but that might have been because it was a foul night once again. I was with Robert Topping, the epitome of the independent bookseller; he not only is bookish and talks bookish but looks bookish, right down to the leather sleeve buttons on his roughly hewn sports jacket.

At present I am the recipient of BBC largesse in terms of being allowed to do programmes that I find it hard to think that any other organisation in the world would take on. There's In Our Time, of course. But I've also just finished a programme on William Tyndale which will be on your screens soon, in June, who was not only, in my view, the primary creator of modern English (i.e. from the 1520s onwards), but in every sense that matters a hero to himself, his faith, but, above all, to the English language.  And I'm setting up films on the two greatest radicals we've ever had: John Ball, the fourteenth century preacher who transformed and inspired the miscalled Peasants' Revolt, and Tom Paine, who was not only a force against the Establishment in this country, but also integral to the American Revolution and the documents which so sublimely mark it, and then there were his efforts in France – no mean efforts at all; he was elected to the French Assembly. It's extraordinary to think that you've been given time to work on such projects.

In Liverpool the other day, talking in the House of Memories. I've been going to Liverpool since the 1960s when I made the first of many films that I've made in that city. It's inspiring to see how well it's pulled itself up after such massive losses to its trade, its prosperity, its very existence at one stage, it seemed. It's a warm city, even though the wind off the Mersey whipped into our faces as we scurried from building to building.

And so into London, this strange hubble-bubble. Still crowded in the West End, pavements totally blocked at times. The weather this week from literally freezing to bright sun. And the first day of the Test at Lord's.