Editor's note: You can listen to Jonathan Holloway's adaptation of 'Nineteen Eighty-Four' from Sunday 10 February. Plus his original plays Loving and Jura from Monday 11 February and Monday 18 February respectively. 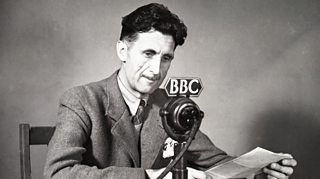 Dealing with Nineteen Eighty-Four, as with any adaptation, the author and I have to meet on a metaphorical park bench, share a cigarette, ruminate, stare into space, agree terms, shake hands and walk away.

I made it clear to George that he’s a hero of mine, and I wanted his permission to adapt the book – which I could probably do better than he would, as I’m a dramatist and he wasn’t.

I flattered him by making it clear he is my hero, but also stated very firmly that he had to license me to find my own voice in the material while I reinvented it for a different medium. “Creative disrespect has to be part of the process, George. And trembling before the monolithic status of your original is the quickest way to a stodgy pointless adaptation. I have to be honest and say when I reach the right moment, I’ll probably shut the book, put it back on the shelf, and write the adaptation as it re-emerges in my mind shaped by what has stuck to the wall.”

Nineteen Eighty-Four was Orwell’s prophecy for a Stalinist England, to which he lent veracity by decorating it with the bleak real-world post-war exhaustion around him.

Adapting Nineteen Eighty-Four is tricky because Smith’s downward trajectory is signalled as inevitable almost from the start and there are definitely no Shangri-La’s in his world to which one might escape.

In order to keep the audience locked-in by more than the dreadful car crash spectacle of the thing, it became necessary to underline every possibility there was for joy, bravery, love, human fellowship and redemption... and sex. Indeed, my favourite parts of the book have to be Julia and Winston’s full-throttle love-making, during which desire, flesh and a deep spiritual bond combine in a private act of resistance.

Writing the original plays (Loving and Jura) about Orwell’s life was easy. Quite simply his dear personality sits at odds with rightist caricatures of him as a dour, humourless lefty [ - and by the way, when it comes to the ones doing the caricaturing I’m here not just referring to life’s natural Tories. I heard plenty of self-styled liberal Nu Labourites haw-hawing at him in the noughties too].

In Orwell’s personal life we find obsession, insecurity, comical clumsiness, desire, frailty, breath-taking heroism and a congenital inability to tolerate the biblical scale of unfairness which vents from the behind of the English class system, which is again booming since it confidently tossed aside the mask of meritocracy behind which it hid in the sixties and seventies. His statement that the thing he really wanted most was ‘to be desired by women’ makes him a full-blooded, neurotic, insecure fellow, for whom compassion is easy to find.

The more words I wrote for him to speak, the closer to him I felt, and the deeper was my upset that fate decided I would never meet the man, never hear the thin timbre of his voice, never smell the French tobacco smoke he exhaled. I sometimes found myself paused at the PC screen, tears in my eyes, grieving for our lost son and master.

Tune in to Holloway's original plays - Loving and Jura

For more on Orwell visit The Real George Orwell

The Woman's Hour Power List: How we found our Top 100