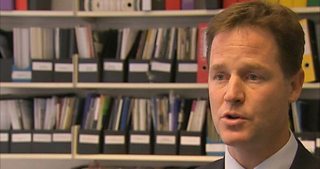 In Feedback this week we discussed the deputy Prime Minister Nick Clegg but listeners weren't concerned about what he said on Desert island Discs about his inability to give up smoking, or where he took his girlfriends in the days before he met his wife.

No, our correspondents were concerned about whether he should have been on Desert Island Discs at all so soon after the Government had announced big cuts in benefits.

They wondered if his appearance was part of a Government PR campaign to show the warm human side of our leaders who have had to take such tough decisions. Eyebrows were also raised about a storyline in The Archers which seems to fit nicely with a Government drive to get more people online. Paranoia or intelligent scepticism? What do you think?

I talked to the Editor of Desert Island discs Alice Feinstein about that invitation to Nick Clegg:

Roger Bolton is presenter of Feedback

Radio 4 goes inside the cage