Editor's note: In Thursday's programme Melvyn Bragg and his guests discussed the Trinity. As always the programme is available to listen to online or to download and keep 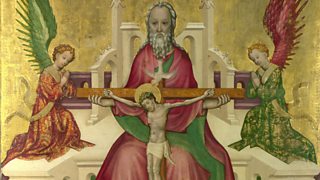 The idea of the Trinity is quite extraordinary. Outside physics it must be the best pursued conundrum in and about the universe. So easy to mock. Yet, again and again, we have to come back to the reality of the intellectual parameters of earlier times. These people were every bit as clever as we are and in some cases much, much cleverer. But they could only operate in the world that was given to them. They were given the Old and the New Testament in the Western world, and what ingenuity and convolutions and speculations and complications and riddles they saw in that or made of that. But the Father, the Son and the Holy Ghost – three in one and one in three – is probably the most beguiling of all. I hope the programme in some way illuminated it.

The number 3, as I tried mildly to introduce, has a powerful connotation. Conception is three in one and one in three. Pythagoras said the number 3 was perfect because it had a beginning, a middle and an end. There were the three Furies. There was the three-headed Cerberus … oh dear, I’m drifting into irreverence and starting to think of The Three Stooges and The Three Musketeers.

So move on to glorious, sunny days in London and up in the Lake District, where I’ve been for the Words by the Water literary festival. Wonderful to listen to Pat Barker and so many others in the lovely little theatre by the lake. To walk by the shores of the lake, with the wind lapping the overfull Derwentwater so hard that it was like being on a seashore (where does the word ‘lapping’ come from?).

Back in London in St James’s Park the cherry blossom is fiercely out now, while up on Hampstead Heath there were congregations (if that is the right word) on Wednesday morning of numerous Muslim men in semicircles around a teacher, or at least spokesman, who was instructing them or debating with them because often two or three people were speaking at the same time. It’s the first time I’ve seen these open air religious groups (if they indeed were religious and not political) on Hampstead Heath. A place made for it.

Went across to York to talk to Kate Atkinson, and walked through York late at night and early in the morning and wondered how anyone born there could ever bear to leave it. It’s such a convincingly medieval city which has not lost itself, even from Roman times, but still operates as a contemporary city.

Enough of treats. Back to London, but what’s waiting? Sunshine? Something’s wrong with the world, surely? It’s only March.

Ukrainians are demonstrating outside 10 Downing Street. The pavements around Westminster Abbey and the Houses of Parliament have ceased to be useful as crocodiles (of the schoolchild variety) no longer inhabit London. They’ve been replaced by mass movement which shifts lone rangers on to the road.

After the programme I’ll be going to Westminster Abbey where Sir David Frost is being memorialised with full honours. Clichés are often useful. A nicer man than David you could never meet.

In Our Time - Spartacus