Editor's note: This episode of Bookclub is available on Sunday 2nd February and will be available to listen online or for download.  Hear a 10 part reading of Khalid Hosseini's The Kite Runner on Radio 4 Extra starting on Monday 3 February 2014. 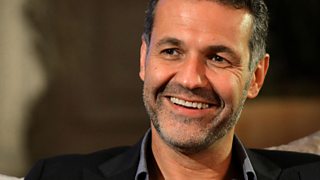 The author of The Kite Runner explains the childhood pastime to James Naughtie.

When Khaled Hosseini searched for his father’s house in Kabul in 2003, he hadn’t been home to Afghanistan for twenty-seven years. It was only home in his memory. But he found the house, looked inside and remembered again how small it had been when he was growing up. Yet he’d had a comfortable childhood, one that was rather like that of Amir, one of the two principal characters in The Kite Runner, the book that had made him famous. But now the house was decrepit, he told our readers on this month’s Bookclub – as Amir himself described it, ‘the house of fallen splendour.’

The book is still read around the world and has clearly introduced a whole generation to the colourful exotic life of Afghanistan, and its darkness – the violence, the regular steps backwards to a past riven by tribal violence, the arrival of outside armies, who’ve been resented throughout its history. As a book about young boys growing up – who discover in the end that they share much more than they realise – it catches both the sadness and the verve of a country that we’ve all had to get to know, although principally through the medium of crisis and disaster.

We began, of course, with the kites. The motif of innocence is immediately appealing – the multi-coloured kites, some home-made and some elaborate contraptions, that all the children fly and use as rival playthings, like flying conkers. ‘It’s a rite of passage,’ Khaled told us, ‘one of the central memories of my years in Afghanistan and one of the ways I spent every winter in Kabul.’ He began to sketch out the different world that readers of the book have come to know – the ancient divisions of ethnicity and class, reflected in the lives of the friends Amir and Hassan, one from the dominant Pashtun tribe and the other a Hazara, marginalised by the powerful and condemned to live with no advantages.

The author of The Kite Runner explains the childhood pastime to James Naughtie.

It’s Amir’s journey that is the heart of the book – he leaves for America, where his father Baba discovers that all the status and familiarity that he can use in Kabul counts for nothing when he walks down the streets of San Jose and is just another anonymous foreigner. But father and son make a new relationship away from home and Khaled told us that he wept at Baba’s death. ‘For me personally, the most heart-wrenching and poignant scene was writing Baba’s death. I love him, because he’s just such a flawed and interesting person and I grew really to adore him.’

That emotional power is the obvious reason for the book’s popularity, and its grip on so many young readers. When Hassan is raped – and Amir always feels guilt about what his friend suffered, and his failure to step in to help – we see a good boy (he’s 16 at the time) violated by a force that seems evil, and his innocence taken away.
For western readers, it’s inevitable that the corruption of innocence is a theme. Khaled began the book before the events of 9/11, and the invasion of his country that followed soon afterwards, and finished it after the latest Afghan war was under way. ‘When I was writing the final passages of the book I was writing about events that more or less had happened weeks earlier, so it was very fresh history.’  Amir and Hassan have lived through the Soviet invasion, the rise of the Taliban and its harsh regime, then the western invasion after 9/11. So it’s a world in which the innocence of their kite-fights is blotted out by the rumble of war, and the scars run deep.

At its heart The Kite Runner is a story about love and loyalty, and that’s why it’s a book that will last. It also tells part of the story of our time. I hope you enjoy Bookclub with Khaled Hosseini.

If you’d like to join us at one of our recordings, the next author will be Emma Donoghue, talking about Room, which was shortlisted for the Man Booker prize in 2010.   All details are on the Bookclub webpage

In Our Time - Catastrophism