In Our Time: The Sun

Editor's note: Melvyn Bragg and his guests discuss the sun. As always the programme is available to listen online or to download and keep 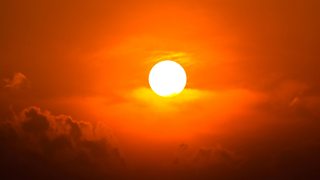 (Note for Ingrid, who always types these messages for me: this will be longer than usual, but all will be explained at the end of the blog.)

This morning’s programme has already been commented on widely, partly because all the contributors were women (although this has happened many times on the programme before and Tom Morris, the producer, did a headcount recently where he found that – without in any way trying to be politically correct – the gender balance was about 50/50), partly though because the three contributors were profoundly knowledgeable and yet delivered their opinions and their information with such a light touch, and of course they became quickly collegiate.

Anyway, I learned a great deal and I hope you did.

The other day, after lunch with a pal, I wandered across to Westminster and came into contact with a crowd.  It was the day of the arrival of the Tour de France in London itself. People were dressed for summer on what had promised to be a summer day. All ages, children in pushchairs, elderly people in wheelchairs, young lovers entwined, families searching for opportunities to plant their picnic somewhere near The Mall, dogs, the bells ringing out from the Abbey, Big Ben keeping its quarter as it did in the day of Mrs Dalloway, yellow umbrellas indicating the guides to the event, polite security guards – what more heartwarming, I thought, than a huge crowd, amiable, capable of closing down The Mall and wholly occupying the constitutional centre of London: us lot, out in friendly force. Few things more amiable than being in a congenial and happy crowd.  Few things worse than being trapped in an ugly mob. But that was not what happened on that cycling day.  Even when it began to rain – and quite heavily – and I scooted off to the Lords and arrived quite soaked, it was still a good day.

The attendant at the Peers’ Entrance told me that the warmest room in the House of Lords was the Gents.  It’s rather a grand Gents. There’s a shower room, dressing cubicles, a shoe-polishing stand and the usual facilities. I found a chair, sat down, took off my soaking jacket and read about the Sun. Or rather I meant to, but I couldn’t get out of my head the deep friendliness of that crowd. And the splendour and simplicity of the event. Vast, double blanket-sized Union Jacks flew along The Mall. St James’s Park was host to scores of mobile loos. Tiered packs of global cameramen were precariously perched here and there. And there seemed to be even more French people than usual. Eventually I heaved up and went into the Chamber of the House to listen to the discussion on child abuse, which was certainly sobering.

As for today? Well, the pelicans are still on the rock facing Horse Guards Parade. Oxford Street has been more or less pedestrianised. Trafalgar Square is now permanently en fete. Soho’s pavements get narrower and narrower for the human traffic. How changed that is in my lifetime. Now, I’m told by a resident of Soho, there are more chocolatiers than brothels. There are enormous processions in and out of Westminster Abbey whenever I pass by and the Thames still glides as it did in the time of Spenser.

I started doing this some time ago when – and for reasons too trivial to go into – decided that I would dictate it as I was walking along, and (this may seem perverse) that I would not read it. (Again, too boring to go into.) I’ve loved doing it and thank you very much those of you who have responded so warmly. But this will be my last blog for In Our Time. BBC Radio has to make economies and as resources are scanter than before, it needs, rightly, to concentrate them on programmes. But I’ve enjoyed sharing my wanderings with you over the years. Thank you for reading them.

And it’s thanks to my producers Tom and Victoria, but most of all, of course, to Ingrid, who has been first-rate. She is, to my mind, the representative of all that is best about the BBC. And now, at last, Ingrid, you are free!  Free!  Free!

In Our Time: Mrs Dalloway