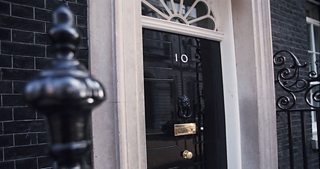 Seismic events. An upheaval in the British political landscape. Radical change in the destiny of parties and political careers. The challenge - to capture the complex, fast-moving, five-day narrative of those events in just 58 minutes.

There was no shortage of material. Transcripts of the many hours of interviews that took place with the protagonists - with Cameron, Clegg, Mandelson, Balls, Ashdown and many more. Many more hours of recorded interviews with the people who were there, in the room as the negotiations that led to the formation of the coalition took place.

As a writer, as you absorb that mass of material, what you have to have is a filter. A way of selecting from that mass of messy reality the things what will help you most in the creation of your script - that artificial construct you have promised to deliver in three weeks time. In my filter there were four layers.

This is the easy bit. The must haves, the things that have to be there. The resignation of Gordon Brown. David Cameron's acceptance speech on the steps of No 10. The big events give you the milestones. That moment as your plane taxis from its stand and then turns to align itself with the runway - when, for a few moments, you see those long lines of lights that lead from where you are to the vanishing point, to the climax of that thundering charge down the tarmac.

I know. An oxymoron. A statement carrying an internal contradiction. But they exist. These are things that are utterly inessential to the forward progression of the narrative - but that carry an emotional, dramatic or symbolic meaning that makes them absolutely essential to your script. Gordon Brown about to face the cameras to make his last ever speech as Prime Minister. He borrows a red tie from Alistair Campbell. Peter Mandelson gives a final piece of advice. Sue Nye, Brown's faithful assistant, puts the advice into action - and adjusts the knot of Brown's tie. How many layers are there? The need, in these final moments to wear, like a badge of honour and an assertion of identity, the party colour. That last service from Mandelson, the ultimate, Machiavellian courtier. And then that moment of intimacy as the errant knot of Brown's tie is straightened.

Dangerous things for the dramatist. The seductive allure of bringing to the centre of the stage that big bass drum marked 'issues' and then banging it hard with the biggest blunt instrument you can find. In writing drama there are commandments, carved in stone, etched with awesome authority, stern injunctions you ignore at your own peril. One is simply this - show don't tell. It's for the audience to decide what the issues are. Your job is to embed the ones you think are important in the story, the actions, the characters.

The infinite variety of human behaviour. Even better, human behaviour in extreme situations, under huge pressure when the things they do and the decisions they take will have massive implications for themselves, for the people around them and for the future of the country. David Cameron facing the Conservative Parliamentary Party knowing he must bring them with him into a coalition that, only months before, would have seemed inconceivable. Paddy Ashdown deciding to put his weight behind the deal. William Hague making jokes to defuse the tension in the negotiating room. Brown insisting on calling his potential partners 'the Liberals' and not the Liberal Democrats. On these brief fragments of human conduct does the destiny of nations hang. And what delicious drama it all makes.

Matthew Solon is writer of Five Days in May

Live chat with Tim Bentinck from The Archers