In Our Time: Simone Weil

Editor's note: In Thursday's programme Melvyn Bragg and his guests discussed Simone Weil. As always the programme is available to listen to online or to download and keep - AI 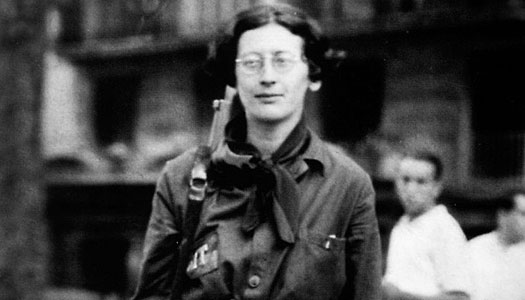 Reading Simone Weil for a week and being involved in an intense programme and then thinking more about her feels like being locked in a cell of my past, both the religious angst, the philosophical yearnings and the French connection.

It became even stranger when, immediately after the programme, I went up one floor in Broadcasting House to read a bit of Alice Through The Looking Glass for a forthcoming BBC celebration programme.

Out into the streets and the Christmas lights still blazingly on at 10:30 in the morning, which to a thrifty Northern soul seems to be a bit of a waste of electricity! But the other side of that thriftiness is a completely undiminished pleasure in Christmas decorations and so I hope they're on all through the night.

Last Friday I went to dinner with friends and, being early, walked the length of Oxford Street at about eight o'clock at night, magnificently arrayed (though not as good as Regent Street) in their Christmas finery, especially the big stores sheeted with decoration, sometimes a little bit too tasteful for me. There was a bunch of young lads - bulging muscles, white T-shirts - using the scaffolding outside the building to do exercises they would normally do in the gym and attracting as big a crowd as if they'd been a jazz band. There were the remnants of a jazz band - a single trumpeter - playing rather dolefully, a little bit worse for drink, I'm afraid, but full of the Christmas spirit, and then turned the corner into Park Lane, not lit up, the comforting darkness of Hyde Park across the way, the big hotels, discreetly shepherding their secrets towards the festive season.

Saturday was a day of Establishment. Off to Wadham College, Oxford - my old college - again early, so wandered through Oxford and came across a bunch of about 30 diminutive carol singers with lanterns and parents going up one of the little lanes around the Radcliffe Camera. I could have been in a Dickens film. Perhaps I was? And on to the Great Hall at Wadham, with the candles and the silver candelabra and people dressed up to celebrate the 90th birthday of Claus Moser, Warden of Wadham for many years, and a man who has spread his great talents across our culture since he arrived here from Germany in the late Thirties. What an amazing life he has had, from watching Hitler's torchlit marches from a flat in which some of the finest music in Berlin was played (and he was one of the instrumentalists), to moving to this country and becoming a leading figure in Harold Wilson's Civil Service and ... too much to relate, as I discovered when I tried to select the highlights for the toast that I made to him.

Sunday was back with the populace on Hampstead Heath. Such a glorious day, but after the Remembrance Service - another mass occasion which is getting ever bigger, I think, and the small crosses outside Westminster Abbey grow every year like winter crocuses (soon to take the whole of the lawns over) - on to Hampstead Heath, absolutely jam-packed with visitors. You mustn't complain about visitors if you are one of them. And what is there to complain about, with so many folk come to this postage stamp Lake District, overlooking London, and full of amiability and enjoyment of a glorious Indian autumn?

Sunday was hard reading. Monday was the beginning of what could only be called an Establishment week. I asked a question about overseas students in the House of Lords. Then there was a meeting at the British Academy of some of the hundred or so scientists and others who have come together to defend British universities. Later in the week there was the Royal Institution where Bill Clinton and Tony Blair were going to speak. Blair, alas, couldn't come because of the illness of his father, but to see Clinton in action was worth the ticket. He just loves it. Even after a long talk he went to shake hands and mingle, ever Presidential and much thinner than he was. The drawl is entrancing and the use of plain and folksy metaphors gives wonderful colouring to his speech.

The next morning to the Royal Society to talk to Paul Nurse about the programme that Tom Morris and I are doing about the changes in culture in this country over the last 120 years. It's odd really that these great Establishment places - oh, I forgot! Westminster Abbey on Wednesday to hear Professor Angie Hobbs (a regular on In Our Time) talking about Plato and secular morality - harnessing their energy to so many causes so well-directed to the 21st century.

At least, that's my story.

It would be great to have the space to make a number of connections here, between classes, between periods in our history and between the metropolis and the provinces, but Ingrid quite rightly will be saying "Enough is enough".