In Our Time: The Druids

Editor's note: In Thursday's programme Melvyn Bragg and his guests discussed The Druids. As always the programme is available to listen to online or to download and keep - AI 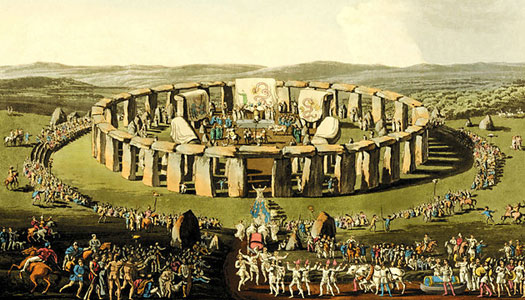 One of the advantages for me of In Our Time is that I become disabused of what I thought was certain knowledge. In 1978 I made a film with William Golding for the South Bank Show. We went to locations which were key to some of his novels and one of them was Stonehenge. We went on a misty morning and except for a man in a rumpled official suit there was nobody else around. We had the run of the place. We filmed William walking the Stonehenge estate and talking about the inspirational value it had. We talked about the inspiration of location. And I certainly took it for granted that this magnificent monument had been built by and used by the Druids.

Not so, it seems, although Professor Barry Cunliffe - and he is an Emeritus Professor! - sort of reserved the right to say that it just might have been the ancestors of the Druids, or the seeds of those who became Druids.

Now, when I drive past Stonehenge on my way to see a pal of mine and his wife down in Dorset, I see crowds cordoned off hundreds of yards away and think oh, what a pity. Bad luck for them. But I suspect like many of you, I'm regularly confronted by people who tell me I should have gone to places earlier (i.e., when they went) when it was so much better, so much quieter, so much more what it really was before I got there.

Well, I got to Stonehenge early, but it turned out to be not the place I thought it was.

The Druids are easy to mock. Even one of the scholars on the programme couldn't resist a little amusement. Miranda Aldhouse-Green talked of seeing her first procession of Druids and having to giggle at the fact that these solemn persons in white gowns all wore white plimsolls.

And there was the famous gathering on Primrose Hill in London where many of the rituals and observances of contemporary Druidism were hammered out.

Nevertheless, they led to inspirational art - William Blake - they spurred the discovery of the value of archaeology and therefore led to an increase in our affection for, and fascination with, the places in which we live. It led to what has become a lasting and very fertile provincialism - one of the more powerful, positive currents in this country. I didn't know that Aubrey had been such a scholar and indeed such an architectural drawer.

We hadn't time to talk about their influence on the preservation of landscapes. For instance, Mr Keiller - the marmalade king - was entranced by the Druids and bought Avebury in order that it should be excavated properly, in the course of which I think he encouraged the first aerial photography of an archaeological site in this country. And others too have fenced off areas they thought holy to the Druids and were certainly a part of the notion of preserving sacred sites.

I'm off to have lunch with Grey Gowrie at White's to discuss the relaunch of the London Magazine. Never been there. Evelyn Waugh used to drink champagne out of a silver tankard.