In Our Time: Hadrian's Wall

Editor's note: In Thursday's programme Melvyn Bragg and his guests discussed Hadrian's Wall. As always the programme is available to listen to online or to download and keep - AI 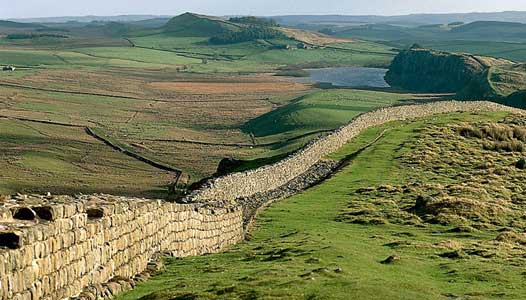 It's all very strange. It must be like living at the time of Caxton - if you are at all aware of Caxton - I wonder how many won't be. But when this programme started about fourteen years ago, I imagined people in ones and twos of the autodidactic tendency and the intelligentsia variety listening rather guiltily to the radio instead of doing something more important - comparison with novels at one time being thought a frivolous waste of time and under no circumstances read in the morning - and not letting the neighbours know.

Last week, after our programme on Scepticism and an audience far bigger than any arts programme on television (including, alas, my own), we had emails from Singapore, Brazil, Vancouver, India, Morocco, Croatia, Sweden, Italy... What is the world coming to? Well, some of the world is coming to In Our Time and we're very grateful.

Hadrian's Wall this morning was an immense strain. I gave myself a medal at the end of it. How did I manage to say so little? I first went on to Hadrian's Wall with my first serious girlfriend when I was seventeen and we walked along most of it, with memorable stops at the youth hostel at Twice Brewed. Or was that Once Brewed? Which is the pub and which is the youth hostel? Because it was near where we were in the north of England - Carlisle is only a few miles away and it would eventually be uncovered as one of the greatest Roman cities in Britain - there was a feeling of ownership. As there was for the whole Celtic religious movement, with Iona so close and islands in the Lakes which had their own hermits who yearned to die on the same day as St Cuthbert (one of them, St Herbert, did, in fact, or so says Bede and who would question Bede?)

But the wall is there in its utter magnificence, and few ruins anywhere in the world can evoke such a powerful feeling of what they were there for once - that is to say, when you're up around Halsteads, or along at Chesters, or even at Birdoswald, you can feel (or if you have any imagination at all you can feel) that you are a soldier in the Roman military, peering eagle-eyed to the north to see if those Picts are gathering their forces to come and assail you. You can feel the frontier mentality of that world empire. Because of the exposed nature of the wall, the weather gives you a feeling of the time as much as the stones and the milecastles do.

I took my son there a couple of years ago and we walked some of it. It was in some way a monumental folly by Hadrian which has turned out to be a monument for all time. Up, then, with follies and off we folly-well go, lonely as clouds - that is the production team and myself - until September.

Have a good summer. Remember what the man said: "There is no such thing as bad weather; only inadequate clothing".