Editor's Note - Comedy Greats: Overseas is broadcast on Radio 4 Extra on Saturday 7th July at 9.00am. Producer Kerry Reece has written about working on the programme - CM 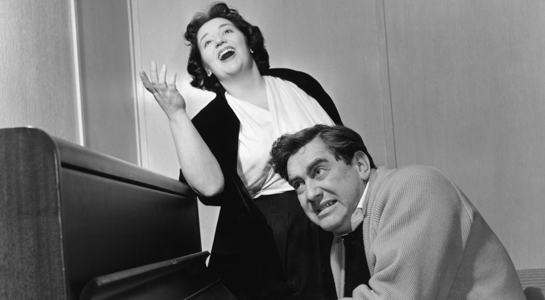 Earlier this year, I completed an attachment as a Producer for Radio 4 Extra - away from my usual home of Radio 2. And this Saturday you can hear the culmination of my time with the UK's most listened to digital only radio station.

Comedy Greats Overseas is a bonus edition added to the latest run of Barry Cryer's review of radio comedy decade by decade.

Whist researching, scripting and creating this 3 hour special, I was surprised to realise that I'd fallen deeply in love. No, not with Barry - though he's adorable to work with - but in love with the work of a small and often overlooked department - the BBC Transcription Service.

It was set up in the 1930s, a direct result of the creation of 'the Empire Service' (the forerunner to the World Service). Its job was to package up and sell domestic BBC radio shows abroad. In most cases, just a few minor edits were needed before recordings were sent overseas on 12 inch 78rpm discs. Topical or domestic references hit the cutting room floor.

But, when it came to the BBC's hit radio comedies, the producers had their work cut out for them, as, in some cases, simply editing out topical or overtly British references would ruin the payoff to a finely scripted gag. So, the Transcription Service hit upon a novel solution. Working in conjunction with each show's producers, writers and performers, they arranged to record NEW versions of the problematic shows. This entailed specially written scripts replacing tricky references with some that were more universal.

This Saturday you can hear examples of both approaches taken by the BBC Transcription Service. There are shows which simply had their topical or British references removed: like a classic 1965 episode of The Clitheroe Kid - where you'll hear how the edited out not only a reference to a woman bearing an uncanny resemblance to 'Mrs Shufflewick' (a prominent drag act of the day!) but also several mentions of Huddersfield!

You'll discover how language caused problems too - like, in an episode of The Navy Lark from 1959 - where the Sub-lieutenant (played by the inimitable Leslie Phillips) remarks on his 'perky little titfer' - a phrase which even some native British speakers would struggle with! A titfer, being of course, Cockney rhyming slang for a hat.

But you'll also hear examples of shows that were completely re-recorded, like Men From The Ministry, the classic comedy about the never-ending bunglings of two inept civil servants. The original episode - 'Strictly For The Birds' - was recorded in November 1962, but was so crammed with British references that, 18 years later, after a surge in the show's popularity abroad (particularly in South Africa), it was completely rewritten and re-recorded by the Transcription Service along with 13 others.

It's the same story for 'The New Secretary' - a classic episode of Hancock's Half Hour which saw the very first appearance of Hattie Jacques's character Griselda Pugh. You'll discover how, and why, the Transcription Service tackled the tricky task of creating a version where Griselda was present from the very start. Incredibly, for years, the Transcription Service version was the only one known to exist. It was only when an original off-air recording was unearthed in 2002 that it was able to resume its rightful place in Hancockian history.

Comedy purists owe the Transcription Service a great debt. While the BBC failed to keep many of its early recordings, this little known set-up meticulously saved the versions they made, creating a vast archive of the BBC's finest comedy shows. Even today, many of the Service's reversions are still the only ones known to exist and many are still heard on Radio 4 Extra - as you can hear this Saturday in Comedy Greats Overseas.

Kerry Reece is an Assistant Producer at BBC Radio 2 and 6 Music, and spent nine months at Radio 4 Extra on a Producer attachment.