In Our Time - Game Theory

Editor's note: In Thursday's programme Melvyn Bragg and his guests discussed Voltaire's Candide. As always the programme is available to listen to online or to download and keep -CM 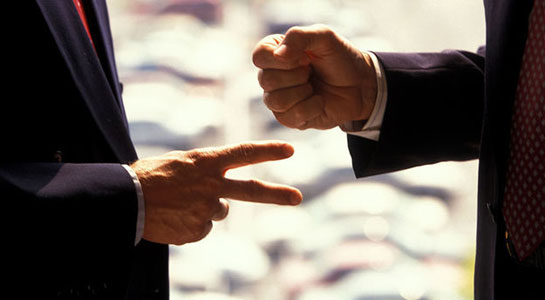 Well, I was rather relieved there was not more mathematics, although having anticipated mathematics I'd made extra efforts before the programme. It's fascinating how ideas can be translated into algebra. Faraday, as I mentioned, was both fascinated and annoyed that Clerk Maxwell had done that with his famous equations.

There's no doubt, according to the three people who were round the table, that this game theory, which sounds like fun at the snooker table or on the Monopoly board, is, in fact, a chink in a new world which will be as important, or more important, than were the originally rather loose and marginal worlds of prime numbers, for instance. I was told by a young lad who works in my office here when I got back that all his science friends at university wanted to go into game theory.

So there! That is the future. Twitter thought so too - I'm told In Our Time was 'trending' this morning.

Afterwards I lurched out into the refreshing London rain and around to the recording studios, where I did the commentary for one of the new South Bank Shows we're doing for Sky Arts; this one on the Grime music which has come out of Bow. It is beyond the belief of Dickens. On one side of Bow is Canary Wharf, the biggest wealth-created part of Europe. On the other side is the new multi-billion pound Olympic Village. And between them is Bow which has one of the worst child poverty problems in the country. Or had. Now it is being hastily reconstructed. But out of it has come this music, Grime, from the three flats - literally three blocks of flats - and these young lads who've forced their way through, through studios called - understandably if you see them - the Dungeon, through local (very, very local) pirate radio stations, etc. It's a wonderful story in terms of endeavour and their determination to be British, and to have their music as British in their own dialect (east London) is - well, you might get round to seeing it.

So the commentary for that and then a stride down to the House of Lords (sorry about the repetitive nature of this), where there was a meeting with a couple of people who wanted to do programmes about - Cumbria! - and then lunch with Gillian Greenwood, with whom I've worked very happily in arts programmes for about thirty years now. She's working on the new series as well. She was the executive producer of the television series Class and Culture and we met to talk about possible future arts programmes. After which into the Chamber itself and listening to statements about the NHS and about security and chatting away to Baroness Bakewell, who is becoming not only a favourite but a star of the House of Lords. On some days she speaks in two debates.

Then - well, you'll be fed up with all this by now - back up Whitehall, where in the morning there had been two massive, loud and exciting demonstrations, and into Soho which is beginning to fascinate me more and more. Once the slut of London, it's now the chic of London. Small shops, every one. Not a chain store in sight. Street after street in this crannied square mile of small shops, dwellings, odd places. There is a mission centre for Chinese workers. There is a shop where you can get Brazilian waxing. There is a bow-fronted clothes shop with the title Sir Tom Baker over it and wonderful clothes in the middle. Lots of little high-powered clothes shops. Sort of Savile Row crossed with rock and roll. There are shops selling Christmas decorations and shops selling antique clothing. There are shops selling - well, all sorts of things which can't be mentioned in a family newsletter, but nevertheless there's a buzz about it, because the street talk and the street traffic is young people in the film and television business, so full of the feeling that this is the place to make the stuff.

And so a little drenched to the office and this newsletter and that's quite enough from me.

PS: One of the best bits was passing the Duke of Wellington in Wardour Street and being met by a bunch of exceedingly cheerful Northerners who wanted to shake hands, buy me a pint and talk about the North. Thank goodness I had a legitimate objective which was to get back to the office and get some work done so that people could go home on time.

PPS: And after the office back into Soho, trying to copy down signs of some of the shops for future reference, through Chinatown, making for Cecil Court, currently my favourite street in London. Perfect for browsing.