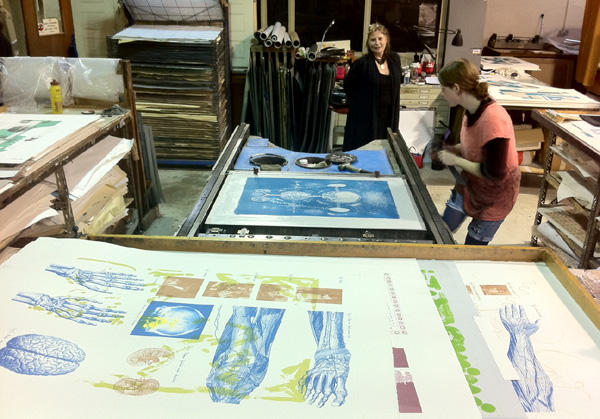 Artist Susan Aldworth (left) at the Curwen Studios in Cambridgeshire

Imagine meeting a "Living National Treasures" (or more correctly the less wieldy "Intangible Cultural Properties"), the honorific title given to artists or crafts people in Japan reflecting their contribution to a skill such as pottery or calligraphy. They are revered as the holders of great knowledge and experience.

Stanley Jones, were he Japanese, would no doubt have been honoured in this way. As it is, the MBE he received in 2000 for 'services to lithography' is not bad.

Stanley probably knows more about the fine-art of lithography than any living person; he has worked with Henry Moore, Elizabeth Frink, Barbara Hepworth, Patrick Heron and David Hockney to name but a few, and his influence on the print making revival in Britain, from the 1950s onwards in incalculable. 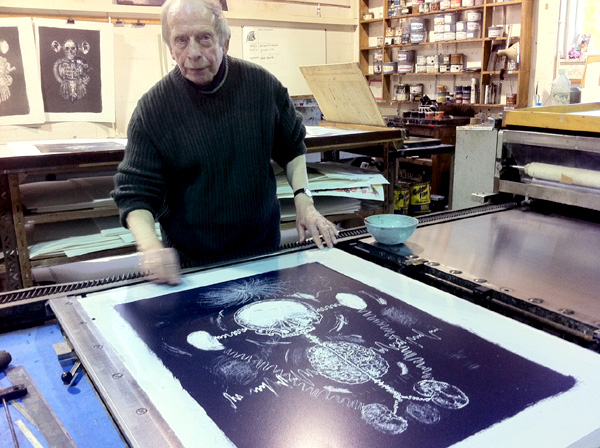 It was my delight to spend time with the artist Susan Aldworth as she learnt the tricks of the trade with Stanley at the Curwen Studios in Cambridgeshire.

I spent a day trying to record the sounds of print making - jumping backwards when the industrially built machines whizzed past at speed, keeping out of the way of the vast stones that great artists had made their mark on, from Man Ray to Paula Rego.

We were also lucky enough to visit both Paula and David Gentleman, two more members of the 'Stanley fan club'. Both artists concurred with Susan that the his knowledge of colour, his tact, and a talent for collaboration, had contributed enormously to their lithographic experiences; which included Paula Rego's "Jane Eyre" series and David Gentleman's "East Anglia" prints.

Susan spent two months at the Curwen as artist-in-residence, finishing off 14 editions of her print work - that's a lot of signing to do. One of the strange facts I found out was that authentic numbered prints are signed in pencil. So if you can rub out the signature it's genuine, if you can't it's a fake.

Stanley, the grammar school boy from Wigan, was quietly spoken, steady and modest, a battle at times to hear over the machinery in the print works at Chilford Hall.

The day I visited there was frost in the fields, a low sun and as the temperature dropped below zero the huge industrial heaters pumped up to full blast. But dropping the microphone under the clanging brass rollers, or catching the sound of hand made paper being ripped skilfully to finish off a print, I had a feeling that digital printing would never sound or smell as atmospheric as this.

Sara Jane Hall is the producer of The Print Master